Home » so you think you can dance exclusive interview 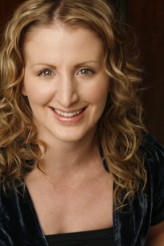 Exclusive Interview: SO YOU THINK YOU CAN DANCE choreographers Mandy Moore and Travis Wall on Season 10

The choreographers talk about the new season and tour 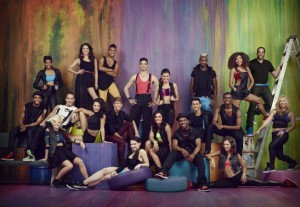 Fox’s SO YOU THINK YOU CAN DANCE, now in its tenth season Tuesday nights at 8 PM, differs from that other network’s dance competition show in some significant ways. Instead of having people the viewers have heard of who are learning to dance for the first time, SO YOU THINK YOU CAN DANCE have extraordinarily talented unknowns working solo, in pairs and as a group. The top ten dancers of any season get a place on the seasonal live tour that travels throughout theU.S. and the series is considered a springboard for all types of careers in dance.

After a rousing Bollywood number performed on the SO YOU THINK YOU CAN DANCE studio stage for the Television Critics Association press tour, two of the current SO YOU THINK YOU CAN DANCE choreographers, Mandy Moore (not to be confused with the singer/actress) and Travis Wall, sit down outside for an interview. Wall is called away at midway through, leaving Moore to comment solo.

ASSIGNMENT X: How did you become SO YOU THINK YOU CAN DANCE choreographers?

TRAVIS WALL: I was a contestant Season 2, and then I ran the auditions Season 4, and then I finally came on to choreograph pieces on the show Season 5.

AX: Had either of you choreographed before you came here?

MOORE: Yes. I also worked on AMERICAN IDOL with [SYTYCD executive producer/judge] Nigel [Lythgoe] prior to being on the show here and various other single episodic things in the business.

WALL: This show is actually my first professional television job when I choreographed. And then it has led me to so many other opportunities because I did choreograph on this show.

WALL: Other movies, television shows, working for artists, working for Broadway shows – everything truly came off of a piece that they loved that I did on the show. They were like, “We love this, we would love you to choreograph something for us here.”

AX: Can you say what your really hot pieces were, where they said, “Ah, that one”?

WALL: The one I got from Season 7 was a two-boy duet that I did and the piece I did for my mother, which was “To Fix You.” Those two pieces really kicked me into all these other jobs that I have now choreographed.

MOORE: I actually just choreographed SILVER LININGS PLAYBOOK, the Oscar-nominated [for Best Picture; it won Actor and Actress for Bradley Cooper and Jennifer Lawrence] film last year. And funnily enough, I got the job because one of the executive producers’ wives watches the show and they were looking for a choreographer, and they were like, “Hey, you should maybe try Mandy, she might be great for this.” So, huge opportunity because of the show. 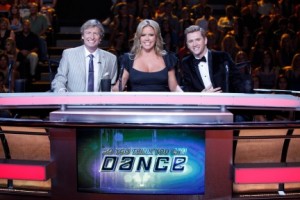 Nigel Lythgoe, Mary Murphy and Travis Wall on SO YOU THINK YOU CAN DANCE from Season 8 | ©2013 Fox/Adam Rose

MOORE: [laughs] That’s a very multi-layered question. I think in general, it gives the dance community accessibility to new talent. So what they do with that talent is up to them, obviously. I mean, I think some have the ability and the talent to go on to be choreographers, some end up being just great professional dancers and go into the workforce. Someone like Mark Kanemura was on tour with Lady Gaga. Alison Holker works all the time as a professional. Some of them unfortunately do come off of the show and they don’t really do anything after it, but it’s like any other business – you either have it or you don’t, and you have to work hard for it, or you don’t.

WALL: I think it [depends on] what you do after the show – it’s what you do after your exposure. I think a lot of kids, either they win or they get really close, and they’re like, “I’ve made it. I was on SO YOU THINK, I got so far.” And those are the ones that nothing happens to. It’s the Alex Wongs, the Allison [Holker]s, me – we’ve worked every single day since we got off the show at our craft and doing something with our exposure to get us somewhere, so it definitely is personal cases with the show. It really shows who wants to work hard and who doesn’t.

[Wall is called away.]

AX: Can you talk about differences in choreographic philosophy, how yours is different from, say, Travis Wall’s?

MOORE: There’s no formula for choreography. It’s not like a science. You can’t say, “A plus B equals C.” Because obviously, when you create, it’s a very personal experience. So first and foremost, choreographers usually draw from personal experiences, so that’s different for everybody. And the way that you actually structure your routine or your process also varies. For example, I like to do a lot of pre-production. I go into the studio with my assistants and I create shapes and I listen to phrases of music and I’ll create sentences – we could call them “sentences of movement.” And then with that, I go into the first rehearsal and I teach those sentences of movement, and then I see how the dancers do with it. And then from that, I’m able to create paragraphs. And from that, I’m able to create chapters. And then I can create a story. Travis, I know, walks into the room and he doesn’t prepare anything. He likes to just go in and do it all on the actual dancers in the moment, so it’s a very different process. I feel like I have to have something in my basket when I walk into the room. Tab[itha Dumo] and Napoleon [Dumo] always go in with a little bit of a section that they like to try and see what the dancers do with it. It does vary from choreographer to choreographer.

MOORE: Nakul [Dev Mahajan]. He’s amazing. He’s our Bollywood choreographer on the show, and I think he’s been here since Season 4.

MOORE: Yes. I have to say, I’m a closet hip-hopper. I love hip-hop, but I don’t choreograph hip-hop. I dream in it, but I don’t choreograph it on the show. I choreograph mostly jazz and contemporary, and from season to season, it varies. Some seasons, I’m like, “I love jazz,” and some seasons, I’m really into the contemporary, so it kind of depends on what song we’re able to clear, what concept the producers clear, who they have – unfortunately, it’s a little bit dependent on what the moment is [laughs]. I don’t have a specific thing that I just love every time.

AX: Do they ever throw songs at you where you think, “Who thought it was a good idea for people to dance to this?”

MOORE: A huge part of dance to me is the music. And unfortunately, inAmerica, we have a lot of restrictions when it comes to clearing music and what can be on the show. So there are hundreds of songs that all of us have wanted to use that we simply can’t get the rights for. So we still have to have a show. So the producers may throw something at you and they’ll be like, “Hey, what about this? We would love something like this in the show – do you think we could do something like that?” Sometimes, you’re like [sighs], “Oh? Really? This song?” but then sometimes it has something great that you wouldn’t normally have thought it would.

MOORE: It’s different because obviously, Bradley [Cooper] and Jennifer [Lawrence] were not dancers and their characters weren’t dancers. The biggest difference is that I’m given a script and a director has told me what direction he wants that scene to go, so for me, that’s a completely different set of tools and when I’m working on something that’s an episodic or I’m given a script, I have to create that world that’s in that script. On the show [SYTYCD], I kind of get to create whatever I want, which is awesome. I can think big and dream big and tell whatever story I want to – I create the script.

AX: Do all the SO YOU THINK YOU CAN DANCE choreographers all go to choreograph the live tour as well?

MOORE: I’m actually the supervising choreographer on the tour and there’s a director that they hire. I’m in charge of taking everybody’s pieces and keeping the integrity of them and cleaning them and putting other dancers in them, so sometimes we’ll bring on other choreographers to do a group dance or something, but it’s mostly just myself.

AX: For the tour, are you recreating dances that were hits on the show, or are you doing something new?

MOORE: Both. The majority of it has been on the show. Some of it might be new dancers in the same number, so if it was an All-Star [who originally did the dance on the TV show] and we don’t have All-Stars on the tour, we’ll replace that with a contestant and I’m in charge of teaching that, and there are times when I create things that are specific to the tour.

AX: The tour takes you through thirty to thirty-five cities. How long are you in each city?

MOORE: A day. It’s like those kids, they usually arrive very late the night before, they go to the arena, they do warm-up, they do the show, and they usually get on the bus that night. It’s a great spirit those kids have, though. Travis said it earlier today – that opening night, when those thousands of people are chanting their names and people freak out when they walk out on stage, it’s incredible to watch.

AX: Do you have any other projects going on now that we should know about?

MOORE: I actually just was booked to choreograph GLEE this year, so I will be the choreographer on GLEE with Brooke Lipton. She and I will be choreographing the entire season.

AX: Wow. How are you going to schedule this?

MOORE: Well, GLEE understood that I had some conflicts with SO YOU THINK, so they are allowing me in these first couple weeks to finish out my commitment with SO YOU THINK, and then I’ll head over to GLEE. And they take a hiatus during the tour, so that’ll work out with the timing.

AX: And is there anything else you’d like to say about SO YOU THINK YOU CAN DANCE?

MOORE: I wouldn’t be where I am without SO YOU THINK YOU CAN DANCE. I’m a huge supporter of it. I think it’s a great show and it’s done wonders for dance.

Article Source: Assignment X
Article:Exclusive Interview with SO YOU THINK YOU CAN DANCE choreographers Mandy Moore and Travis Wall