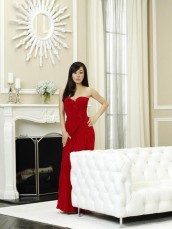 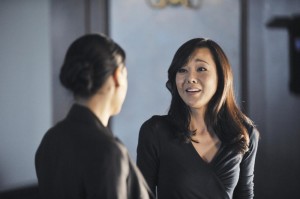 Yunjin Kim spent six years as the radiant, resilient Sun Kwon on ABC’s LOST. Now the actress is back on ABC in MISTRESSES, which airs Monday nights at 9 PM. Adapted from the British series of the same name, MISTRESSES tells the story of four female friends, played by Kim, Alyssa Milano, Rochelle Aytes and Jes Macallan, some of them – like Kim’s character Karen – actually involved with men married to someone else, and some simply affected by the fallout of other people’s affairs.

Kim is at a party thrown by ABC for the Television Critics Association. People who know her only from LOST or from the films she’s made in her native Korea may be surprised by Kim’s speaking voice, which sounds primarily East Coast American. Kim explains, “My home is actually back in Korea. I grew up here in New York, but I really started my career as an actress back inKorea.”

ASSIGNMENT X: There was a two-, two-and-a-half-year gap between the end of LOST and the beginning of work on MISTRESSES. Did you enjoy your time away from U.S. network television, or were you looking to get back into it?

YUNJIN KIM: It was never a conscious choice, it was just, LOST was my first TV show here in America, and I just went back [to South Korea]. I think I did three films in Korea before coming out here [to Los Angeles], and ABC was really interested in bringing me in, and I read for my character and I got it. I’ve always said, “The next American TV show I do, I don’t want it to be anything similar [to LOST].” Because I felt like, the amazing show that LOST was, my character was just so specific in ethnicity and that was the focal point of my character, whereas my next show, I wanted it to be just about the character that has nothing to do with me being Korean or not. Originally, my character’s name was Karen Rhodes and they changed it to Karen Kim after they cast me. So it was a perfect type of show to come back to.

AX: Had ABC actively been looking to do something with you since LOST ended?

KIM: We had some talks here and there. Nothing was really concrete. As soon as I read this pilot, which was very female-driven, about [the relationships] between these four amazing women, I get to do a show where I’m actually in hair and makeup and really pretty clothes, which is a huge change from LOST, I just got excited, because personally, I’m surrounded by amazing women in my life, but to do a show about a whole bunch of women who I can relate to, care about and sympathize with – it was just a no-brainer.

AX: Were you familiar with the British version of MISTRESSES?

KIM: Actually, I saw the very first episode the day before my audition. I wanted to get a general idea of what the show was about and as soon as I got back [from the audition], I went back and finished the first season, which was six episodes.

AX: Where is your character Karen at in her mistress-ing?

KIM: I loved this first on the show. [Some] other women on the show deal with a different form of infidelity, whereas I’m the straight-out mistress. As soon as you meet her, I’ve been this [relationship] for some time, my lover dies in the very first episode, and at the funeral, I meet my dead lover’s son.

AX: So a lot of the show is about grieving for somebody who you have no legal connection to?

KIM: Right, no legal [connection] – and no business being with, really. But it’s about the mistakes that we make and all these characters are very flawed and they make horrible, horrible mistakes, but the focal point in the story is what they do and how they try to make things right, and they really lean on the friendship of these women to navigate the complicated side of love.

AX: Does Karen get another romance beyond the dead lover?

KIM: Yes. And that’s the huge conflict. All I’m going to say is, you don’t get to choose who you love.

AX: Can you compare the MISTRESSES relationships at all to the Sun and Jin relationship on LOST?

KIM: Sun and Jin were legally married, whereas on MISTRESSES, I’m a single woman having an affair with a married man. There’s a huge difference there. And I’m not only crossing a personal corner, I’m crossing a professional line as well.

AX: Where does MISTRESSES shoot?

KIM: Right here in L.A. I never lived here in L.A, it’s my first time. I really like it.

AX: How do you like working with a female-centered cast?

KIM: I love it. Again, I said it before, but I’m always surrounded by amazing female friends and they’re the ones who are with me and kind of slap me around when I’m doing something wrong. And to do a show about all these characters I can relate, sympathize and really care about, it’s great. I mean, I see my friends in all of the characters, all of the female characters, which is really nice.

AX: To ask a LOST question, how did you feel about how the show wrapped up?

KIM: I think it was the only way to wrap the show up. I mean, I know that not everyone was thrilled about it – some people were really angry about the ending. It just shows you how much people put in their time and their passion for the show. You know a show like LOST is not going to [be like] every other show that I do – it’s a rare experience and I treasure it.

AX: Is there anything you’d like to say about MISTRESSES?

KIM: MISTRESSES is a sexy, steamy show about a whole bunch of really attractive characters that you’re going to really end up caring about.