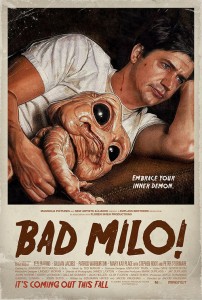 In the annals of ass-monster movies, BAD MILO comes across as a terrific rush – pardon the unavoidable metaphors. Not nearly the gross-out fiesta its premise of a dooty Dark Half might imply in its admittedly hilarious trailer, this production of director Jacob Vaughan (THE CASSIDY KIDS) and the usually sedate mumblecore directors / producers Jay and Mark Duplass (BAGHEAD), BAD MILO is far more of an update of tragic WOLFMAN mythos, as crossed with the satire of OFFICE SPACE, the reproductive angst of THIRTYSOMETHING and any number of post-EST self-help psychiatry sessions.

Grimacing and screaming through it all in a way that makes Jeff Daniels’ vein-popping runs in DUMBER AND DUMBER seem like a simple tinkle in the toilet is the very game star Ken Marino, a performer more often used to hilariously looking good. As one of the founders of The State, there’s no doubt you won’t recognize the hunkily hilarious actor as a magnificent cad in the likes of MEN BEHAVING BADLY, WET HOT AMERICAN SUMMER, THE TEN, VERONICA MARS, PARTY DOWN and CHILDREN’S HOSPITAL.

A writer as well on that cult show and the films ROLE MODELS and WANDERLUST, the Long Island LA transplant is having a particularly great time making mincemeat of the himbo reality dating prototype on the web series BURNING LOVE. But with BAD MILO, Marino digs deeper than ever before to playing utter absurdity with a straight, poignant commitment as a milquetoast whose inner rage channels itself outward to tear apart his enemies. Except that creature just happens to be the most cutely vocal practical effects monster this side of GREMLINS’ Gizmo, a sweetness and unexpected sympathy that also elevates Marino’s work in the bargain – making for one of the most unexpectedly likable odd couples, and movies, this year.

ASSIGNMENT X: A lot of people will go to see BAD MILO thinking that it’ll be a funny, Troma-esque gross-out horror comedy with some stars. But the biggest surprise is that BAD MILO’s actually a real film that ends up being far more thought provoking than bowel moving.

MARINO: Thank you! That’s a testament to Jacob and the Duplass brothers. I was excited to get the call from Mark, because anything those guys do is going to have some sort of emotional heart. He told me it was a slightly odd movie, and not like the other stuff they’d done. Then I read it, and discovered BAD MILO was about an ass monster that comes out, kills people, and then climbs back up my ass. Of course, I said, “I’m in!” Because even though it was a slightly different genre movie, I knew that it would still have the nuances and heart that their movies have.

AX: We’re so used to computer-generated monsters that it’s great to have you interact with a real, physical creature, which gives a lot of the heart to Milo. Did you ever have any “bonding exercises” with the puppet?

MARINO: The scene that definitely made me want to do the movie comes from the picture that’s on the poster, where Ken and Milo are in this motel room at their lowest point. They’re just living together and bonding like roommates. It shows you the beauty of Milo being a practical character, because the guys controlling it are as invested in the scene as I am. So you aren’t just interacting with a piece of foam. You’re working with a scene partner, whose face is acting in a real, believable way. The effects people did such a great job of creating Milo. I talked to somebody who really liked the movie after its premiere at South By Southwest. I was curious as to why, because the movie could have really gone either way. It could have just been a string of poop jokes, but ended up being a lot more than that. And this guy said that what put BAD MILO over the top for him was the monster, because a monster movie can only go so far as the creature itself. But Milo is interesting, and has a lot of emotional layers. Hearing that was a “wow” moment for me, because I’d never thought of that before. All I thought about was what I was doing as an actor while we were shooting with Milo. I think the fact that Ken can’t kill Milo because he’s a part of him adds so much emotion to the journey these characters are taking, because they can’t separate from one another. I think that makes BAD MILO a truly interesting “monster” movie.

AX: BAD MILO reminded me a lot of THE WOLFMAN in the respect of a likable guy having a murderous, if somehow sympathetic id-beast burst out from within him. Did you verse yourself in that kind of archetypical “horror hero” role to take on Ken?

MARINO: Not consciously. Ken’s a mild-mannered, put-upon guy. And if you’re going to care about him and the creature that comes out of him, then you need to play Ken as a victim. I didn’t want him to be smarmy. He’s a put-upon guy who’s dealing with some real issues, and they manifest themselves in this crazy, “horror movie” kind of way. 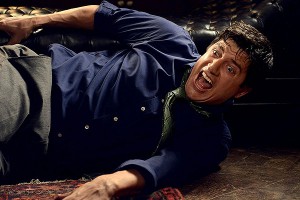 AX: Both you and Patrick Warburton are very handsome actors who’ve often used your looks to play cads. Does employing your “gift” in that way come in handy?

MARINO: My time in this town when I moved out here in ‘98 has been a lot of swings at sitcoms where I’ve been one of an ensemble, or the guy who’s supposed to be ‘the leading man.’ I’ve taken a lot of swings, and had a lot of misses. But I do know the tropes of that character, and it’s fun to mock it, or embrace the ugliness of them. So while I sometimes embrace the aspects of that kind of character that I can play, I certainly don’t take them seriously!

AX: You’re brilliantly handsome and vain in BURNING LOVE, which is one of the most hilarious web series done yet. How do you do a satire of a date show genre that’s so ridiculous to begin with?

MARINO: That really comes from my wife Erica Oyama. We watch those shows. I’m not going to lie. I get caught up in them, but then lose my interest pretty quickly. But when she was pregnant with our first child, my wife really got into THE BACHELOR and THE BACHELORETTE. So she knew the nuances and the tricks that they used on these shows. Erica told me that she wanted to write it as a short for me and Adam Scott, as we’d all gotten together to watch the BACHELOR finale. And when I took a look at her BURNING LOVE script, I thought that this could be a series. As far as directing, producing it and being in it, my mantra was to shoot BURNING LOVE exactly the same way they shoot the shows, and just amp it up 10%. You don’t have to make it too absurd, because the premise is already ridiculous. You only have to goose it a little bit and let the absurdity speak for itself.

AX: Were you ever worried about blowing out a blood vessel during your big bathroom scene in BAD MILO?

KM: No, but I did blow my vocal chords during it. I had to tell the production afterwards that I wouldn’t be able to talk for the next few days. And then I blew my voice out again for the new season of EASTBOUND AND DOWN when I did this screaming scene. I had to sing Karaoke two days later, and I told them I didn’t know what to do. So I think BAD MILO ruined my screaming voice, because any time I try to yell now, now, my voice just goes “Pop!” It was a certainly a physically draining movie to do! 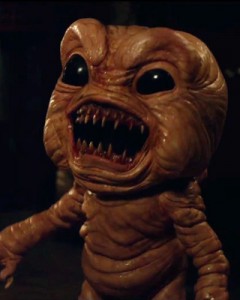 AX: In a way, do you think the ultimate subversive quality of BAD MILO is that you become so emotionally invested in it?

MARINO: That’s what the hope was. If you don’t give a shit about Ken and Milo, then the movie doesn’t work. That’s what makes Milo a cool monster. Even though he’s awful, he’s a victim as well, and by extension, Ken.

BAD MILO is now on VOD, and opens theatrically on October 4th