©2013 FX
Members of the cast of REAL FEAR, a Chiller TV documentary
Interviews 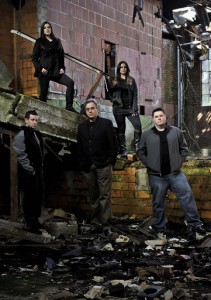 Members of the cast of REAL FEAR, a Chiller TV documentary | ©2013 FX

Most people know that THE AMITYVILLE HORROR is reportedly based on real events. Far fewer knew that the SILENT HILL films also had roots in history. The stories behind both of these films, along with THE MOTHMAN PROPHECIES and POLTERGEIST, were explored in last year’s REAL FEAR: THE TRUTH BEHIND THE MOVIES special, which aired on Chiller TV.

Tonight, Friday September 6, Chiller TV is back with a follow-up, entitled REAL FEAR 2, or alternatively, REAL FEAR: THE TRUTH BEHIND MORE MOVIES.

Larry Landsman, who executive-produced both two-hour specials, is on the phone to talk about the new edition.

ASSIGNMENT X: Which movies is REAL FEAR 2: THE TRUTH BEHIND MORE MOVIES covering?

LARRY LANDSMAN: This time out, we have our team separating fiction from fact – for THE HAUNTING IN CONNECTICUT, FIRE IN THE SKY, A NIGHTMARE ON ELM STREET and THE BLAIR WITCH PROJECT.

AX: Supposedly NIGHTMARE ON ELM STREET was loosely based on studies of people who died in their sleep …

LANDSMAN: People always raise their eyebrows with NIGHTMARE ON ELM STREET – if you die in your dreams, do you really die in real life? Wes Craven was inspired by a number of stories that came out in the early Eighties. There were news articles about a group of young men, Filipinos and Cambodians, who had emigrated to the U.S., experiencing horrific nightmares. Soon after [experiencing the nightmares], the men died in their sleep. These were healthy young men and they all complained of these horrific nightmares. And they refused to sleep for days on end, they started to drink coffee and took stimulants in order to stay awake, and these articles caught [Craven’s] attention, and that’s how Freddy Krueger was born.

We spoke to Edward Modestino, with the Department of Psychiatry and Neurobehavioral Sciences at the Universityof Virginia, just to discuss what happens during normal sleep and what happens in nightmares. Can in fact a nightmare cause sudden death? And we were doing a sleep study with the cast.[of REAL FEAR] at Pennhurst, the abandoned [institution for the developmentally disabled]. It’s one of the most haunted places in America, because a lot of the people who’ve been there have claimed they’ve had horrific nightmares afterwards. [The REAL FEAR team] tempted fate by sleeping overnight at Pennhurst. I don’t know if you’ve heard of Pennhurst – it is labeled as the most haunted [institutional complex] in America. It has an awful, awful history of abuse when it was open. And you can feel it – it’s palpable when you walk into that abandoned facility. I did feel something was there – I won’t give too much away, but every cast member had an experience and you’ll see it in the show. In fact, another person we brought in with us to that facility was Chip Coffey. He’s a nationally renowned psychic and medium. We brought him in and there are some really, really creepy things, information that we learned through him. So A NIGHTMARE ON ELM STREET did start out with a basis in a real story.

AX: What about THE BLAIR WITCH PROJECT?

AX: How would you describe the format of REAL FEAR?

LANDSMAN: This is not the kind of special where we are fabricating anything for cameras or just to get it right. The cast truly experienced some inexplicable things throughout shooting this special. It really is amazing to have been there and witnessed and heard some of the things that went on for all four segments. We established this formula for these specials, which is somewhat unique. I’ve never seen it done anywhere else on television. As opposed to a lot of these paranormal investigative shows where they put a team together, they strap on a lot of equipment and they go into some of these places and they walk around for an hour, we’re looking at the real stories behind these iconic horror films, so we use clips from the film, but we’re also using archival material from these true stories, and then we’re going in to investigate and meet up with these real-life folks, whose stories inspired the films.

That’s kind of the heart of what we’re doing here – we really wanted to show how Hollywood pumps up these films, and what I found fascinating in doing all the research was that truth is much more interesting and terrifying than fiction. 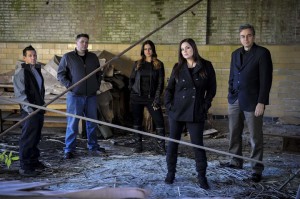 Members of the cast of REAL FEAR, a Chiller TV documentary | ©2013 FX

AX: Do you think part of the problem that there are things that you sense or smell or touch that don’t translate to the screen as well?

LANDSMAN: Look, Hollywood is Hollywood. Let’s take FIRE IN THE SKY. For most of that film, I would say it really held true to the account. Now, we met with Travis Walton, whose story was depicted in FIRE IN THE SKY, and his story was one of a UFO abductee. When they get to the part where he’s taken into the ship, Hollywood came in and really pumped that up. It wasn’t quite true to what actually happened to Travis. He finally set the record straight for the first time with us and with the viewers, and the one thing he did say was that they got the fear down. What he felt being taken up in this craft was absolute terror, and that’s what they were going for, but what you actually saw in the film wasn’t exactly accurate. Look, it has to be visual for film, and it has to have certain beats, and you have to have a certain story arc, and you’ve got to fit it all into two hours, so obviously you’re crafting a story for a motion picture. First of all, if you ever had to really deal with the true story, you would need a lot more than two hours of film. They had to condense what happened in a lot of these stories. But they change a lot.

For HAUNTING IN CONNECTICUT, for those viewers who remember, there was an incident in the shower where the shower curtain started suffocating the niece. That actually happened to the mom in real life. What we do is, we go back and we set the record straight with these real folks to separate fact from fiction. That’s what we did last year, and as I said, I think it really resonated with the viewers.

AX: Who’s in your cast this year?

LANDSMAN: We have Katrina Weidman returning from last season, who most viewers know from PARANORMAL STATE. Katrina is just terrific. She’s had many personal run-ins with the paranormal. She’s been involved in over eight hundred investigations and interviewed close to a thousand witnesses. Also back from last year is John McGarry, who Katrina knew the first time around. John is an avid film and horror buff. They each bring something very unique to the table. Chris Holt returns from last year. He’s very athletic. He’ll go urban spelunking anywhere you ask him to and he’s your go-to guy just to make things happen on these investigations. We have two new cast members, Richard Dolan, who appeared in last year’s special as a talking head. This year, he’s out in the field. He’s a very well-known historian and researcher who is an expert on the UFO phenomenon, he’s written many books and lectures and tours on that subject. He brought his own unique perspective to the proceedings and he was invaluable of course during the FIRE IN THE SKY segment. We also added Becky Weingrad, who’s a new member of the cast. They really worked well together and they’re really good with the witnesses. The witnesses really opened up to them. We brought in John Zaffis, who is the host of HAUNTED COLLECTOR on Syfy, to help out on the investigation in Southington, Connecticut, [which was the site of] THE HAUNTING IN CONNECTICUT. And Carmen Reed, who was the mom of that [CONNECTICUT] family back in the Eighties when this happened. She came back to discuss exactly what happened, versus what they showed in the film.

AX: How much research do you do?

LANDSMAN: Me personally? Well, as executive producer, it all starts with me and my producing partner John D’Auria [who directs the special]. We propose to Chiller which films we want to dig into. I do the research to start out with, and then hand it off to our producers and our cast, but the germ of the special begins here, when we make a decision as to which films to do. In a case where there’s a film based on a true story that is way old, obviously there won’t be any witnesses left. We would love to find stories that are more recent, in the latter part of the twentieth century, so some folks would still be around to talk to. Like for instance, last year, we did the movie POLTERGEIST. It was based on the Hermann family, who experienced extraordinary paranormal activity in their home in the Fifties.

We like to find something that our team can go out and get to the heart of. In fact, what we also want to do is bring something new to the table, either about the case that we’re investigating or even something related to that case. In THE HAUNTING IN CONNECTICUT segment, the team discovered another haunting in Connecticut, only a couple miles from the original location, and they went in and actually investigated that one as well. Some pretty scary, inexplicable things happen there as well. They met with the homeowners and took a look at the evidence – pretty amazing evidence.

AX: Have you ever started an investigation and then realized, “Uh-oh, this is based on baloney” and had to stop?

LANDSMAN: Well, no, because we do our pre-production and our legwork first. I don’t think we ever got that far on any one story in particular to turn around. We’ve always considered a few stories and we kind of focused our energy. There are so many stories that are substantially true that fortunately we haven’t really gotten too far with any particular case that warranted us to turn around and drop it. But yeah, there would probably be some films we wouldn’t go near. There are some films that just don’t have enough veracity – SHARKNADO, for instance [laughs].

LANDSMAN: But the franchise REAL FEAR, where our team goes to find the truth behind the movies – I think down the road there’s always the possibility that we could investigate the truth behind anything that’s strange, such as the truth behind psychic phenomena or the truth behind urban myths and legends. Right now, we thought it would be a great idea to kick off the franchise this way. But there’s no reason we can’t pursue other strange phenomenon down the road. There’s so much out there that we still don’t understand. I’ve always been into sci-fi, but I’ve truly developed a passion for the paranormal. I’ve always felt the truth is out there somewhere and there are in fact other realms or planes of existence, and I have a feeling that we are going through some kind of spiritual awakening with awareness of these phenomena and just the incredible interest that everyone is showing in it. Science is almost catching up with some of these things. Multiverses are now being discussed among physicists and what used to be science fiction is science fact in many areas. So a lot of these things are worth exploring.