The BLACKLIST actor also talks about his other projects 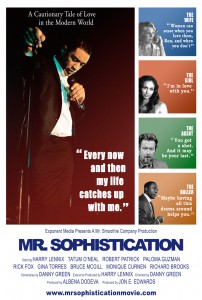 Harry Lennix is a very prolific actor. In discussing all his new, recent and upcoming projects in a telephone interview, he jokes, “I’m in every movie ever made.” That’s a slight exaggeration, but the Chicago-born actor does have a lengthy resume that includes the two MATRIX sequels, the Oscar-winning RAY, the Shakespeare adaptation TITUS ANDRONICUS, ACROSS THE UNIVERSE and this year’s MAN OF STEEL. Lennix is also one of the stars of NBC’s new espionage thriller series THE BLACKLIST, which premieres September 23.

A film that’s especially close to Lennix’s heart is MR. SOPHISTICATION – as well as playing the title role, he is the movie’s executive producer. MR. SOPHISTICATION, which costars Gina Torres, Robert Patrick and Bruce McGill, debuts on home video and video on demand Friday, September 6. In it, Lennix portrays Ron Waters, a stand-up comedian attempting to launch a comeback.

ASSIGNMENT X: You were talking about MR. SOPHISTICATION while you were still on DOLLHOUSE, so you’ve been working on this movie for about four years now?

AX: Did it start out as a Web series?

LENNIX: No, it didn’t. We shot a couple of trailers. It’s typical when you’re trying to raise money to shoot a trailer just to give a taste of what the movie is going to be about, but we never did shoot a Web series.

AX: Have the trailer scenes been incorporated into the film, or are they completely separate?

LENNIX: They are both. We’ve used what we shot in the trailer to some extent in the film, and then some of it didn’t make the cut. You use what you can, because expenditures were spent on it, and it worked, it’s beneficial to the film. But we didn’t do it in every case.

AX: Is Ron Waters a Richard Pryor-like comedian trying to get his career back together after a meltdown? How would you put it?

LENNIX: That’s how I would put it [laughs].

AX: In real life, how did you discover Richard Pryor?

LENNIX: Through my brother’s sneaking me the album. When I was about eight or nine, and I must have been in about second or third grade, I remember hearing this language – of course, I recognized the language was primarily composed of words that weren’t supposed to be said [laughs], but his ability to go into characterization and to reduce a fragile moment to something beautiful and funny was apparent to even my young mind. I knew that it was genius that I was listening to and I would sort of sneak to hear it when my mother wasn’t around. Then my mother heard it one day, and she asked that it be played so she could hear it, and she laughed uproariously, so for whatever reason, she would occasionally give us dispensation – we would be able to listen to Richard Pryor. I’ve always been aware of him. I’m not in any way suggesting that Rob Waters is Richard Pryor; he’s not, but he has been influenced by that type of person. That is, someone who is not telling punch-lines but is relating painful stories of his own personal life in real time in a way that is improvisational and very funny, even though it’s filled with pathos. So I think in that regard, Ron Waters takes after him – and a bunch of other people, Lenny Bruce and any number of comedians who are excellent at distilling their lives for humorous consumption, people in the Seventies and Eighties. Although there is a tone to [MR. SOPHISTICATION] that is reflective of the period, it’s set in 2013.

AX: How did the project MR. SOPHISTICATION initially come about?

LENNIX: It was written for me, actually, by a director. His name is Danny Green. He saw me in a situation one time that was not typical of me. I was very upset and I was dressing somebody down on a movie set. And he saw that moment and was inspired to write this character. It’s a kind of amalgamation of Danny Green’s alter ego and my alter ego. I contributed to the character, but I did not write the script.

AX: Did you already know each other at the time, or did he just see you on set and go, “Wow, that guy is really interesting when he’s angry”?

LENNIX: He was aware of me. I didn’t know him well. He was the first a.d. on a movie and I was an actor in that movie. I would say hello and that sort of thing, but we didn’t know each other well, but I think he saw the [Chicago] South Side kid come out. 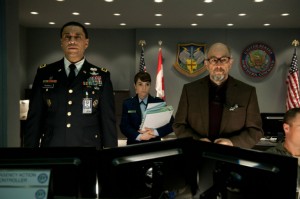 AX: Were you very flattered, or just surprised that somebody decided to write a script for you?

LENNIX: I think I was a little bit of both, actually [laughs]. I’ve always enjoyed tackling somewhat more legendary figures. I enjoy the good parts – Macbeth, King Lear, August Wilson plays. So to have something written for you is extremely flattering, but it was no less daunting than anything else, than any big role that has to be executed. It required me to do something that I’d never done before, stand-up. I try to challenge myself all the time, as with MR. SOPHISTICATION, but people have gotten used to me in some of the more visible projects I’ve done, these fully evolved men who are not somebody looking to find themselves.

AX: In MAN OF STEEL, you played U.S. General Swanwick, who seems pretty fully evolved. Did you empathize with the character’s reaction to Superman?

LENNIX: [laughs] Which one?

AX: Well, several. He went from, “You’re a scary extraterrestrial,” to “You’re a good thing to have in our pocket.”

LENNIX: Did I share his opinions about Superman? Well, I think if you put me into a circumstance like that, I’d have a similar response – “Who is this person that can fly?” [laughs] “Who is this man, what is this, and who is this person coming to destroy our planet?” That’s my job as the character. I enjoyed that man, and I would like to think that I would respond in a similar way. I think he did everything the way that I would approve of doing.

AX: How was MAN OF STEEL as a production experience?

LENNIX: If there’s a way that it could have been more efficient, more seamless, more well-executed, I don’t know it. They had the best in the business at their beck and call, and they used them expertly. It was great. They were on schedule, no days went excessively long, nobody was screaming at anybody [laughs] and everybody was there to work hard and have fun and we did that. We’re proud of the results.

AX: You’re also in a film that just came out on home video called EVIDENCE. What is that?

LENNIX: EVIDENCE is a found-footage film. People are trying to put together [what happened concerning] a string of murders that happen on this bus, and I appear as one of the people in the footage. It’s a kind of a slasher/horror flick. I think we shot it two or three years ago. I have not seen that movie, but it was fun to work on. We shot it in a few weeks out in the high desert.

AX: You are also executive-producing and playing King Henry IV in H4, which sounds like it’s a film adaptation of Shakespeare’s HENRY IV?

LENNIX: Yes. H4 is actually in post-production at this point. We intend to have it out the first quarter of next year. It is to my knowledge the first Shakespearean film ever set in the black world. So it’s got a completely black world-view. It’s set inInglewood,California, and most of the actors are actors of color, though not exclusively.

AX: So is it like Joss Whedon’s MUCH ADO ABOUT NOTHING, in the sense that the Shakespearean language is still the same, it’s just transposed to a contemporary setting?

LENNIX: It is. [Modern-dress Shakespeare is] not uncommon.

AX: When did you get that together, and were you the person who thought, “Let’s set this in Inglewood”?

LENNIX: We got it together as an idea in 2010, although I’d been thinking about it [previously]. I worked with a friend of mine who’s an esteemed Shakespearean scholar. Her name is Dr. Ayana Thompson. She came up with the whole Inglewood/England dialectic. She and I worked together on the content, reconstructing it in the black experience.

AX: Had you played Henry IV on stage previously?

LENNIX: No. In fact, I did not intend to play Henry IV at all. We had another actor, but he was unavailable for reshoots, so we had to recast.

AX: Had you shot the whole movie and then had to reshoot the scenes the other actor had shot?

AX: But you’ve done Shakespeare before …

AX: Is doing Shakespeare on stage different than doing it on film, or does it really depend on which role it is?

LENNIX: I guess the most noted Shakespeare I’ve done is [director] Julie Taymor’s TITUS ANDRONICUS [Taymor’s 1999 film version starred Anthony Hopkins and Jessica Lange, with Lennix as Aaron]. She first did that on stage and I was in that production. The interesting thing is, I was the only actor from that production to get into the movie, and I found that it was very different – I was much more physically active, or I could do much more physically in the movie, just because I’m not constrained to the parameters of whatever the stage dimensions are. But I think in many ways, it’s the same process. You have to figure out who the character is, you have to do the work, you have to figure out a way to activate what needs to be done dramatically. So it’s a lot of the same kind of work, just sometimes in a different environment.

LENNIX: I think it’s more the latter. THE BLACKLIST has brought attention to its cast, and I’m lucky to be part of it, and it happens to be lining up exactly with the timing of the release of MR. SOPHISTICATION. It’s not something we planned; we couldn’t have known it when we were making the movie together and I certainly didn’t know about the job until mid-spring, so it’s all a confluence of events, and I think they’re feeding each other.

STAY TUNED FOR Part 2 of our exclusive interview with Harry Lennix as we discuss THE BLACKLIST – and what happened to his character on DOLLHOUSE.