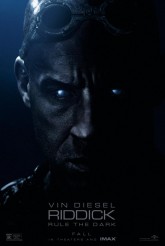 In 2000, David Twohy directed PITCH BLACK, a nifty bit of sci-fi/action/horror, from a story by Ken Wheat & Jim Wheat (all three share screenplay credit), which introduced Vin Diesel’s character Richard B. Riddick. Riddick can see in the dark, a handy talent when stranded on a planet where monsters come out at night. The Writer/director then brought Riddick/Diesel back for 2004’s THE CHRONICLES OF RIDDICK, which jettisoned the horror angle for an unfortunately dead serious sci-fi would-be political epic that simply didn’t work.

Now we’ve got RIDDICK, which returns to a great extent to its PITCH BLACK roots. Again, Riddick finds himself on an uninhabited planet with some very unfriendly wildlife. A flashback, including CHRONICLES costar Karl Urban, shows how Riddick wound up stuck here.

This time around, Riddick finds a minimal sign of civilization – an old, abandoned bounty hunter station. Riddick, as usual, has a bounty on his head, but since it’s the only way of summoning a spacecraft to catch a ride out of here, he presses the beacon. This brings in two separate groups. One, headed by the sadistic, flamboyant mercenary Santana (Jordi Molla), is simply out for Riddick’s head. The other, captained by Boss Johns (Matt Nable), has other motives. Neither side fully reckons with Riddick’s legendary abilities – and yes, the character has achieved intergalactic legend status within the film’s universe – let alone this planet’s indigenous challenges.

Overall, filmmaker Twohy seems to have learned to lighten up. There is still plenty of violence and gore, but the mood is more Tarantino than it is, say, EQUILIBRIUM, so a lot of RIDDICK is fun. This includes just about all of the creature stuff, including a canine that looks something like a cross between a hyena, a German Shepherd and a zebra, and a lot of giant venomous critters. Some of the human action is good, too, with Twohy and Molla milking suspense from a sequence with an explosive safe lock.

On the downside, there’s some tough-guy voiceover stuff that’s not worth the few deliberate chuckles it provides. When Twohy does get serious here, the dialogue tends to land with a thud, and the aimed-for big emotional peaks don’t work. There is also a subplot with Katee Sackhoff’s character that is handled so badly that we wind up wincing by the payoff. There’s also hitting the mythologizing of Riddick’s character too hard, so that there are moments when the whole enterprise teeters on self-parody.

Diesel is as growly and capable as ever here, and Molla is a worthy, watchable opponent. Sackhoff brightens up her underwritten role with commendable verve.

RIDDICK is one of those movies that, once you watch it, is destined to likely get mixed up in most people’s minds with a lot of other movies that are sort of like it. However, for the time that it’s onscreen, it’s diverting enough to merit a watch.