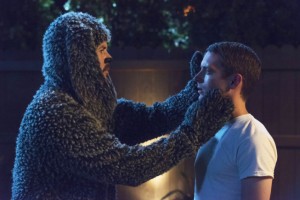 WILFRED is a very unpredictable show – it’s not like this series about a man who sees his neighbor’s dog as a man in a dog suit is playing by any kind of rule book – but if there is one thing we could absolutely count on, it was a season finale that answers nothing and just raises more questions. On this front, with the episode “Regrets,” WILFRED delivers.

Wilfred (Jason Gann) is wound up because he thinks his owner Jenna (Fiona Gubelmann) is having an affair that he tries to create a trap to expose her lover. This backfires badly – Jenna wrongly thinks Ryan (Elijah Wood) is trying to pursue a romance with her and decides to cut all contact, not even letting Ryan hang out with Wilf any more. This leaves both Ryan and Wilf miserable.

Meanwhile, Ryan’s dad Henry (James Remar) has once more offered Ryan a job, swearing things will be different this time. Ryan is ready to believe him, until he learns that dad had Ryan’s ex-tenant Anne (Kristen Schaal) spying for him. Ryan decides to simply run away, and Wilf wants to run away with him – they’re best friends, after all – until Wilf smells Jenna on Ryan from the kiss Jenna initiated at the end of last week’s episode. Wilf attacks Ryan, Henry shows up on the scene and tries to break it up and, in the ensuing tussle, Henry trips on one of Wilf’s tennis balls and falls down the stairs, breaking his neck.

At the funeral, Ryan and his mom (Mary Steenburgen) both contemplate the notion that Ryan’s father might have really been trying to do his best for his family after all. Ryan at first forgives Wilf for the accident and Wilf forgives Ryan for kissing Jenna. Then Ryan has a rush of feeling that his priorities are all wrong – rather than mourning his father, he’s once again worrying about Wilfred. Ryan rejects Wilf, decides to take his place at his father’s law firm, starts cleaning out dad’s desk – and finds that his father has saved an old envelope that Ryan sent to him as a boy. Checking out the address on the card, Ryan finds the ruins of a house … and a stone carving that looks much like Wilf.

It’s appropriate (and possibly deliberate) that the last scene of the episode resembles something out of LOST, since we have a distinct sense that all of this mythology is intended more to mystify than to edify or even amuse us. Here it seems much less likely than on LOST that we’ll get answers.

The central event of the episode is handled so oddly that it seems like perhaps Ryan’s father should have died of something else. Since Wilf has established that he uses tennis balls as a weapon of murder, it’s surprising that Ryan never entertains the notion that Wilf might have intended to cause harm. Then again, if it turns out that Wilf deliberately killed Henry, it seems like Ryan would have to turn into an overt sociopath in order to continue to hang out with Wilf, or else … Wait, this is WILFRED, so who knows what that development might cause within the show?

Wood is especially strong in conveying Ryan’s wistful angst and growing rage here, while Gann continues to make us believe the strange being we know as Wilfred exists on the same plane as Ryan – he makes us take the premise for granted, which is an enormous ongoing feat. Remar is sympathetic as Henry.

So Season 3 ends, and we still don’t know what Wilfred is, what the drawing means, what the stone carving means … and whether there will be a Season 4.