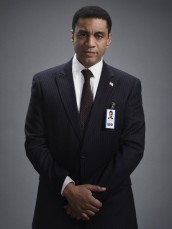 The actor also talks about what happened to Boyd in DOLLHOUSE 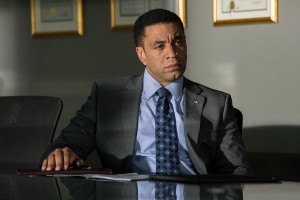 In NBC’s new drama THE BLACKLIST, Mondays at 10 PM, James Spader stars as Raymond “Red” Reddington, a wanted spy who comes in from the cold, much to the suspicion of his old colleague-turned-FBI official Harold Cooper, played by Harry Lennix. In Part 2 of our exclusive interview with Lennix, we talk about THE BLACKLIST, along with the twists in his Boyd Langton character on DOLLHOUSE, with Boyd being revealed as a villainous mastermind at the end, after being a heroic protector for a season-and-a-half.

AX: How would you describe Harold Cooper?

AX: Harold Cooper is kind of a badass – I mean, he’s a badass in a suit who gives orders, rather than punches people himself, at least so far, but a badass nevertheless, which describes a lot of the kinds of characters you play onscreen. Is that something you enjoy, or is that just how casting people see you?

LENNIX: I certainly enjoy it [laughs]. I like playing men of consequence. I think men of consequence require capacity – you have to think about what you’re going to do, how you’re going to do it, so I like that. I certainly don’t like playing subservient or marginalized people. That’s not I want to develop or have concentrated on. I enjoy these kinds of roles. I think because I enjoy them, I really do them better than [meeker] roles, although it is extremely important to work outside of my comfort zone as an artist.

AX: Does Cooper get exasperated with Red’s flamboyance?

LENNIX: Internally, certainly, but not so that you’d see him sweat.

AX: So he’s just going to maintain a cool demeanor pretty much no matter what …

AX: So if you do see him break a sweat, you know it’s serious.

LENNIX: Or he’s doing it for effect.

AX: To get people moving faster?

LENNIX: Correct. Or to get them to do whatever it is, achieve whatever end.

AX: Had you worked with James Spader before this?

LENNIX: I had never worked with James Spader until now. I tell you, watching him work was a real inspiration, because he comes always prepared, he’s very detailed in his work, and it’s just a thrill to watch him work and to go toe to toe with him.

AX: Are the scenes between Cooper and Red consistently antagonistic? Do we have any flashbacks to you guys twenty years ago where you’re both really hairy and you’re good friends?

LENNIX: I don’t know, but I like that idea – there’s the suggestion that they at one point were much more involved than they are right now. But of all the characters in the show, Harold Cooper knows Reddington better than any other character. So there’s something there, and I don’t know if it was always antagonistic. I think that will be interesting to find out.

LENNIX: My idea is that Cooper is much more intelligent than anybody would give him credit for, which is why he’s in this position. I think he sees Keen as the key tool for strategizing against Red and to achieve whatever his goals are. So I think he feels warmly toward her, but I don’t think that’s primarily the issue. I think he sees her as as a useful asset in trying to get this information. And I think it’s purely that functional – I don’t think it’s emotional.

AX: Now, you’ve played a lot of FBI agents. Is this character very similar to or very different from Boyd on DOLLHOUSE, especially with the “Nobody’s what they seem to be” publicity tagline for BLACKLIST?

LENNIX: Good question. I have thought about the Boyd tie-in – Boyd was a cop, not really an FBI agent in the past, and also, it turns out that he’s the mastermind. I think there is some symmetry here – if there’s a character that I’ve played in the past that has some resonance here, I think it is Boyd Langdon in this character Harold Cooper. They do have some interface here.

AX: Well, they’re both in charge of, or at least keeping the lid on, some very peculiar organizations.

AX: How did you feel about the surprise revelations about Boyd being an evil mastermind at the end of DOLLHOUSE?

LENNIX: It surprised me, too [laughs]. But I came up with a kind of intellectual construct where it could work. I didn’t particularly endorse it – I’m just an actor, I’m a gun for hire, the writer writes it, I try to execute it. It wasn’t like they did it to please me. But since it was there, I tried to make the most of it. What I did was, I think since the Dollhouse was capable of transplanting any personality [into any living body], whoever Boyd Langton was must have at some point gotten transplanted. So I think the person that people came to understand as the protector of [Eliza Dushku’s character] Echo is sitting on a shelf someplace and that he is essentially body-snatched, mind-hacked, brain-hacked, and that really wasn’t him by the end of it.

AX: So it was actually two different people?

LENNIX: That’s what I think. I mean, that certainly seemed to be the case with a lot of those [DOLLHOUSE character] people [laughs].

AX: THE BLACKLIST shoots in New York City. How is that?

LENNIX: I’s great. There is no substitute [laughs]. People can try as much as they want, but to get the energy of this city, you have to be in the city. To get these locations, you have to be [in New York] – you can green-screen things from all over, but some things you can’t reproduce. I love working here. I don’t live [in New York] any more, I live in Los Angeles and I enjoy that very much as well, but to work on a series like this here is terrific.

AX: Do you like the spy genre as something to watch, as an audience member?

LENNIX: I do. I mean, I’m not a huge consumer of it, but I enjoy it. I like intrigue, I like mysteries, I like things that have to be solved, puzzles, so I do like the genre.

AX: When did you begin work on THE BLACKLIST?

LENNIX: We shot the pilot in the spring and [by early August were] onto I think Episode Two or Three.

AX: With Cooper being the boss and running things, are they ever going to get you out of the office and have a gun in your hand and punching people?

LENNIX: I sure hope so [laughs]. It would bring me back to my Boyd days, because I used to love walking around with that Colt .45 and beating up people, so I hope I get to do a little bit of that.