Vincent Keller is back and more beastly then ever! 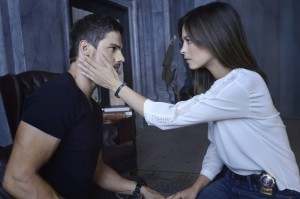 It’s been three months since Vincent Keller was kidnapped in “Never Turn Back,” last episode of season 1 of BEAUTY AND THE BEAST. He was taken away in a net by Muirfield, or so we thought it was Muirfield. As the net is pulled up with Catherine looking up a man with a gun is about to shoot her and the other man tells him “do not shoot, she’s my daughter.” As Catherine’s father (Rob Stewart), who she always thought was her father lies dying in the hospital her sister Heather (Nicole Gale Anderson) is told that her sister’s blood test shows no relationship to him. Heather who has been unable to speak with her sister has not been able to talk to her about this.

Catherine has been searching every moment for Vincent, along with J.T. who has been monitoring the cameras around the city. Gabe Lowen (Sendhil Ramamurthy) who dies in “Never Turn Back” is brought back to life by Catherine in hopes that he can help her find Vincent. He was another experiment of Muirfield, but somehow now is no longer a beast and back working at the precinct. By chance J.T. catches on camera someone that looks like Vincent and sends a message to Gabe, as he cannot reach Catherine. Catherine and Gabe go to see J.T. who is trying to get a match on the search program. Finally it matches and they notice that Vincent scar is no longer on his face, but that is not all that has been changed.

Upon arriving at the place where Vincent is being held by Li Zhao (Brian Tee) who is trying to get out of Vincent who hired him to kill him. Li Zhao is Muirfield, and at that point you realize that it was not Muirfield that captured him. Li Zhao thinks he knows what can keep Vincent down as he created him. He might have created him, but someone has changed Vincent. He now looks more beastly when he changes and he remembers nothing from his previous life.

He does not remember Catherine, or J.T. After they put him out by a tranquilizer gun when he wakes up he asks Catherine “Who Are You?”  Catherine has the belief that Vincent will remember and tells him that they are meant to be. Vincent even though he has no idea who she is believes her.

While at an event to honor her father she is approached while outside on the patio by her real father FBI Special Agent Bob Reynolds (Ted Whittall), but she is not aware that this man is her real father. He tells her that he knew her father and that he worked with the FBI, but he had never mentioned anything about that to Catherine.

Getting a phone call from J.T. he tells her Vincent got a phone call and left after he shot him with the tranquilizer gun. Big surprise Vincent works with Agent Bob Reynolds who has dealings with Li Zhao, who is Muirfield and is the one who put the kill order out on him. Li Zhao was threatening to let everything out and if he went down he would take Reynolds with him.

One of Vincent’s new abilities is that he can go back and track people from one point to another just following the way they went by visualizing the scent of the person. Catherine follows him and lands up in the building where Muirfield is located. Vincent has turned into the beast and is trying to get to Li Zhao, but Li Zhao gets out a gas mask to prevent himself dying from toxic gas he’s filling up the lab with. Catherine arrives at the lab and is having trouble breathing and just as the place catches on fire and she is yelling for Vincent he stops and grabs her and jumps out of the window as the Muirfield lab explodes. Landing on the sidewalk below…no injuries really…another new power for him. Catherine tells him this is how we first met, which of course means nothing to him.

Taking him back to her apartment, she dresses his wound as he has lost the power to heal himself. She finally breaks down and cries, which she has been holding in since he disappeared and her father died.

Waking up to a phone call from Tess (Nina Lisandrello) Li Zhao has been found dead and mauled to death and Vincent is gone when she looks over. The episode ends with Vincent jumping down from a tree as the beast right where Li Zhao was killed and turning back to himself and walking away.

It will be interesting how long it will be till Vincent remembers who he was and his love for Catherine. Will Catherine find out who her real father is and what she does about it?

Article Source: Assignment X
Article:TV Review: BEAUTY AND THE BEAST – Season 2 – “Who Am I?” – Season Premiere