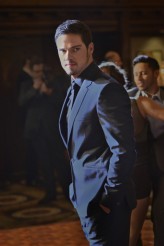 Is Vincent starting to remember ... finally? 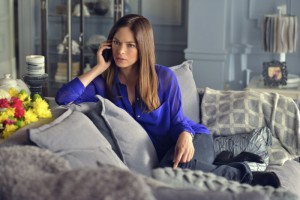 “Liar, Liar” is an interesting episode of BEAUTY AND THE BEAST since now you realize that Muirfield made a lot more beasts. Are they rogue or is someone else pulling their strings? Who made this list that FBI Reynolds has? Since he worked with Muirfield was this a list he made up? Is he lying to Vincent that he is not on this list? There are so many questions to be answered and would love to see them starting to tie some of these up.

“Liar, Liar” starts the morning after Vincent had grabbed Katherine and she is in the bathroom trying to cover his finger marks so people don’t notice. Her sister Heather stops over and asks her what is wrong with her neck. Of course, she can’t tell the truth and tells Heather (Nicole Gale Anderson) it was from the way she slept and that she had a deep tissue massage which probably was too deep. Why did Heather stop over it was to tell her she had gotten a job, but it is in Miami and wanted advice. Heather was still trying to tell her about the hospital blood results. It has been 3 months already! Deciding to meet for coffee after work, Katherine tells Heather she has to go as she is meeting up with Gabe. Donning a scarf, which is against regulations, she tells Gabe the truth and she has a plan to find out who is pulling Vincent’s strings by going to his place and pretending that she wants to talk about their relationship with Gabe and Tess as backup.

In the meantime, Vincent stops by J.T.’s, which totally surprises him. He asks if he had heard from Katherine and if she was okay. He admits to J.T. that he hurt her because she kept questioning him and he got frustrated. He didn’t mean to and that he wants him to tell Katherine he feels terrible and that he will stay away. J.T. tells Vincent I’m not sure that would be what Katherine will want. This was a nice scene between two old friends, even if Vincent can’t remember J.T. and what he did for him.

Vincent leaves J.T.’s and as he is walking down the street he gets a phone call and it is FBI Agent Tucker (Mark Taylor) and while they are talking the other beast kills Tucker by putting his hand through the back of the seat and through Tucker. At that point Tess calls Gabe and Katherine at the coffee shop to tell them there has been another beast attack. Tess is convinced it was Vincent, but J.T. calls Katherine and tells her that Vincent was at his place and that she needs to tell him next time when Vincent hurts her, he is very upset about this, and that he gave him a cliff-note version of their relationship together. Vincent didn’t kill Tucker as he was at J.T.’s at the time of the murder so that clears him. At that point FBI Agent Reynolds (Katherine’s real dad) shows up at the scene and tells them he is taking over.  Gabe is very adamant that jurisdiction is his at the moment. Agent Reynolds sends Vincent back to the parking garage to check out the crime scene and while he is there the other beast shows up, but Vincent is having trouble pinpointing where he is exactly. Describing the beast to Reynolds and as soon as he tells him he was British, Reynolds realizes it is Sebastian ((David De Lautour). But how can he be there and not be there? Vincent tells him “he doesn’t play games” and Sebastian tells him “it’s not a game, it’s magic”.

Back at the precinct Katherine is worried as Vincent can sense when someone is lying and asks Tess, to teach her how to beat a lie detector test. Tess used to do party tricks teaching people how to do that. Tess hands her a tack and tells her to put it in her shoe and when she is lying to step on it. They are all set to go. Heading to Vincent’s to download the information on his computer, but right when she is in the midst of it Tess radios her that he is coming fast and doesn’t look to be in a good mood. He walks in and is very surprised to find Katherine there. She tells him his door was unlocked and she wants to talk about their relationship. You can tell that he is skeptical and not sure if he believes her. Once again he apologizes to her and ask if they can start over again as he was enjoying there time together, but no questions…don’t ask and don’t tell.

Meeting her sister Heather she is finally able to tell her about the blood test, which shocks Katherine. So much so that she forgot her and Vincent had a date. Returning home she finds him standing at her door with flowers. I liked the fact that he was trying to have a normal relationship with Katherine, but of course it doesn’t work out this night. He knows she is lying and postpones the date.

Vincent is trying so hard to understand Katherine and why he is pulled to her, and I hope in the next few episodes he starts to remember more then this episode revealed.

After figuring out what “Friday At Five” means, they realize it’s a painting that will be at an auction at the Penthouse of Nigel Clifton, who owns many galleries and he is Sebastian’s dad…and that Sebastian wants to kill him. Nigel thinks he’s dead, just like people thought of Vincent. Wanting to make sure Katherine wouldn’t show up Vincent calls her to ask her to meet her at the hotel and go swimming in the pool like they have done before. Katherine at that point calls J.T. to find out if that was one of the things he told Vincent. Vincent is shocked when they show up at the art auction.

Why does Sebastian want to kill his dad? The painting “Friday At Five” was a reminder of the times his father would take his son to the magic shop he tells Tess. Nigel loved his son, but Sebastian wants revenge!

I thought the end of the episode was the best really with about five minutes of actions and beast interaction. Katherine takes Nigel in the elevator telling him she spilled wine on his painting and that there is a threat to his life. He can’t figure out who would want to harm him. Tess and Gabe are evacuating the guests, as how would they cover up a fight between two beasts so they tell people there’s a gas leak. While in the elevator the power goes off. Katherine knocks Nigel out as Sebastian comes through the elevator. Sebastian had already knocked Vincent out.  Sebastian is trying to knock Katherine down the elevator shaft as Vincent in his beast form rips the doors open and pushes Sebastian down the shaft and as Katherine is reaching out yelling Vincent as she is about to fall, he sees flashes of saving Katherine before. Yes it is about time things start coming back to him!

When Katherine gets home she finds Vincent sitting on the fire escape. Asking him if J.T. told him about this, he goes “no, I remembered.” Which I believe he did, but after a day filled with lies…her father…and everything else she doesn’t want to accept anything and so closes the window and leaves that room. A great ending to what was a long day. I still would like to know how long will it be till she finds out who her real father is and the story of him and her mother. That should be a really intriguing and heart filled episode.

Every version of  BEAUTY AND THE BEAST, I feel has been about romance and the odds you have to go through, so when Vincent shows that side of him toward Katherine, well as much as he can, it is very endearing. That is the part of BEAUTY AND THE BEAST that I really like. In “Liar, Liar” you got a small glimpse of that.