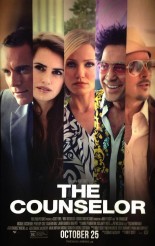 Director Ridley Scott and writer Cormac McCarthy are masters of craft who should not be underestimated. However, their collaboration on THE COUNSELOR – erstwhile novelist McCarthy’s first screenplay – is not the finest work of either one. Although THE COUNSELOR has certain thematic qualities in common with NO COUNTRY FOR OLD MEN, it lacks of that story’s poles, the ethical if ultimately ineffectual sheriff played by Tommy Lee Jones or the implacable killer Anton Chigurh, played by Javier Bardem (albeit Bardem is actually in THE COUNSELOR, as a very different sort of character). There is an equivalently destructive force to Chigurh in THE COUNSELOR, but because of the film’s structure, this figure’s impact is greatly muted.

The title character in THE COUNSELOR – no one ever calls him by name – is a lawyer (Michael Fassbender) with a practice in El Paso, Texas, who often goes over the border into Juarez, Mexico. Although the counselor mostly plays it straight, he decides to invest in a drug deal. He is warned by everyone around him that this can go hideously wrong in a great many ways, but he opts to go ahead. Everyone around him turns out to be right, though it takes the counselor awhile to realize this.

Fassbinder is a terrific actor, charming and watchable, ready to seem trustworthy, duplicitous or desperate as circumstances may dictate. He is especially likable, as intended, in scenes with the counselor’s beloved Laura (Penelope Cruz). The two share a healthy and well-discussed sex life, but the counselor’s ardor for his lady seems to be his main redeeming feature. As for Laura, all we know about her is that she’s in love with her man and she’s Catholic. This isn’t a lot to go on, though at least she has a name.

THE COUNSELOR seems to have been designed chiefly so that McCarthy can give a number of actors some fun speeches on the nature of choices, death, sex and so on. The actors, all clearly having a blast with this stuff, include Bardem as Reiner, the counselor’s eccentric partner in the dangerous investment, Brad Pitt as a more experienced member of the team, Cameron Diaz as Bardem’s independent mistress and Ruben Blades as a philosophical player. Scott delivers tons of visual style, whether staging a shootout for maximum impact or simply framing a pool scene so that the sculptures around the water resemble shark fins.

The problems with THE COUNSELOR are multiple and varied in nature. First, there is the overload of foreshadowing. The average horror movie about demon summoning has less “don’t do it” discussion than this drama, which makes the counselor look a little bit dense. There’s also the matter of why he’s doing it. We are informed via Bardem’s Reiner that the counselor is desperate for money, but all we see is an upscale lifestyle that doesn’t appear to be in any danger from drying-up business, angry creditors or the like to give the situation special urgency. The counselor may be fooling himself because of greed, but this is only alluded by Reiner, not because of anything we see the counselor do.

There’s a lot of double- and triple-crossing happening here, but it comes off less as clever than convoluted, because we’re not tracking many of the players. Moreover, the film’s message – that it’s a bad idea to try to finance a big drug score, because you don’t know everybody you’re dealing with, and that even the people you do know likely don’t know everybody they’re dealing with – is not only hammered hard, but bends back on itself. It’s hard to take the movie’s pronouncements about choices and responsibility completely seriously when its details turn out to be as outrageous as they are here.

Some of the scenes are very funny and some of the speeches are memorable – Bardem’s Reiner goes into a gynophobic reverie so far over the top that it’s hilarious – but at the end, the sensation is more that we’ve been listening to someone who’s entertaining but doesn’t let us get a word in edgewise than of having received a gut punch. The filmmakers seem to have been going for both, but despite their great cast, the characters aren’t allowed sufficient breathing room for us to believe in them enough to care.