Home » Revolution TV review of One Right, One Ranger 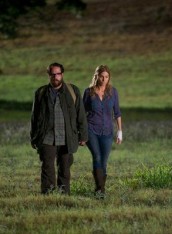 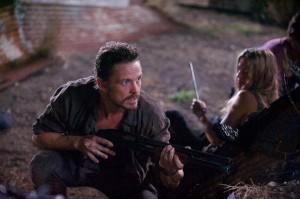 Monroe (David Lyons) and Charlie (Tracy Spiradakos) get ready for a fight on REVOLUTION "One Ranger, One Riot" | (c) 2013 Felicia Graham/NBC

The role of Monroe (David Lyons) on the second season of REVOLUTION is an interesting one. He’s a man that has a lot of talents – killing, ruthlessness and no remorse. While on the surface his addition to the group in Texas is one filled with rage and a quest for revenge, they need him. They need his unique talents.

That creates an interesting situation on what could be the most-improved show of 2013. In “One Riot, One Ranger” it was a stage setting episode but one that worked in a variety of ways. It showed that Monroe can be sort of the hired gun that the Texas clan needs in order to fight the Patriots, despite how much he is despised by all those around him.

The enemy of my enemy and all that. But with all the complex relationships that have been established from the first season – which could be the one good thing that happened in Season 1 – it creates a paradox that will be further explored next week as the previews show Monroe is captured and set to be put to death.

I am really enjoying the pace of REVOLUTION in the second season. They are taking their time in developing the story and gradually introducing new elements to the key mythology along the way. That is a huge, ginormous switch from Season 1 where many of the episodes were just one shots of the characters moving from one town to the next and fighting militia. It was boring, it had no meaning and always seemed to be treading water.

But in Season 2 there is a slow burn happening. They have done a great job of establishing the new world after the nukes fell at the end of the first season and have kept the show quaint (confining the bulk of the first episodes to just two central locations) while giving viewers enough to chew on with the whole Patriot angle as well as whatever is happening with Aaron (Zak Orth) and maybe a bigger concern: What’s happening in the world thanks to the nanotech that shut off the lights.

Speaking of Aaron, we learned that even before his untimely death (and subsequent rebirth) he may have had CARRIE powers before as we see in a flashback to the first time he met his girlfriend and burned her cheating husband alive in the back of a Honda Accord (or whatever it was).

So far, I’m enjoying REVOLUTION immensely, something that had you asked me I would be saying this at the end of last season, I’d call you crazy. That’s a good thing.