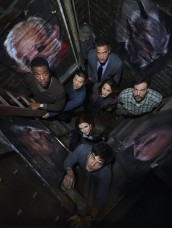 Eventful and full of action 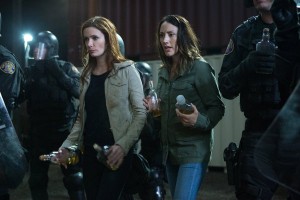 Season 2 of GRIMM ended on a cliffhanger, with our hero, Nick the Grimm (David Giuntoli) zombified and put in a coffin by Baron Samedi (Reg E. Cathey), and Juliette (Bitsie Tulloch), Monroe (Silas Weir Mitchell) and Rosalee (Bree Turner) trapped by running zombies (the infected live kind, as opposed to reanimated corpses) in a storage yard.

The Season 3 opener hits the ground running, yowling and bleeding, as Monroe et al call the police station for help and Nick’s coffin is put on a plane belonging to Prince Eric (James Frain), who has unspecified but doubtless evil plans. What nobody counts on is that a Grimm is not affected by Baron Samedi’s venom in the same way as a normal human. Nick comes to on the plane, kills the Baron and causes the plane to crash, then flees in his relatively rabid state.

Back in Portland, the police show up and help rescue the trapped trio. Juliette is frantic to find Nick, but isn’t so obsessed to think straight. Brainstorming with potion-maker Rosalee, Juliette realizes that they can make Rosalee’s zombie cure airborne. As thePortlandpolice have managed to herd the storage yard zombies into a container, it’s possible to simply toss the cure in with them and have them inhale it. This cures a whole batch of victims.

Off in Vienna, Adalind (Claire Coffee) goes through a gruesome ritual to get her powers back. This is a successful endeavor.

Renard (Sasha Roiz) is in the midst of setting up a hit on his half-brother Eric – Eric being behind the zombie epidemic and the kidnapping of Portland’s resident Grimm is too much for the police captain – when word arrives of the plane crash. Renard, Nick’s partner Hank (Russell Hornsby), plus Juliette, Monroe and Rosalee all go to the crash site. The pilot and co-pilot are injured but have survived; only Baron Samedi is dead. Our group tracks Nick to a roadhouse where he’s torn up the joint, but by the time they get there, the Grimm is gone. Nick is actually snarling around the outside of a house where an unwary family with children is inside.

And that’s where “The Ungrateful Dead” ends, with another cliffhanger. GRIMM being what it is, we can make an educated guess that Nick isn’t going to kill anybody in the house, but it’s still an interesting moment.

The action in the episode is a lot of fun, with Monroe and Renard separating woge-ing out in order to better battle the infected hordes. It’s also nice to see Juliette integrating promptly and thoroughly into what’s going on, after her long period of being kept in the dark.

The visuals relating to Adalind’s “recovery” are quite lush, with a vivid field of flowers withering as the spell takes hold. Director Norberto Barba gets some cinematic scope into this scene, as well as conveying the toxic nature of the magic involved.

As for Renard trying to take out Eric, this promises to be intriguing, primarily because Roiz and Frain are both so much fun in their respective roles.

Based on “The Ungrateful Dead,” it seems that all hell is breaking loose on GRIMM this season – and that’s just as it should be.