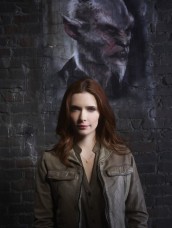 The actress talks about the new season, playing Juliette (including that love triangle) and becoming part of the Scooby gang 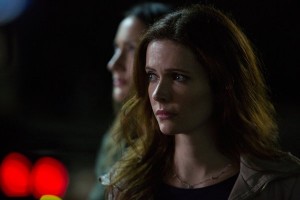 When GRIMM’s second season was nearing its conclusion, things were looking up for Portland, Oregon veterinarian Juliette Silverton, played by Bitsie Tulloch. After a long bout of amnesia about her boyfriend, police detective Nick Burkhardt (played by David Giuntoli), Juliette recovered her memories and found out that the secret Nick had been keeping from her was that he’s a Grimm – someone who can see and must sometimes combat Wesen, fairytale creatures who can look human but have hidden identities and appearances. Juliette also recovered from her sexual obsession with Nick’s police captain, Sean Renard (Sasha Roiz), who is half-supernatural Royal and half-Hexenbiest.

Then all hell broke loose with a zombie epidemic. Season 2 ended with Nick becoming infected and being locked in a coffin, while Juliette, plus Nick’s Wesen friends Monroe (Silas Weir Mitchell) and Rosalee (Bree Turner) are trapped in a storage yard by a rampaging mob.

Season 3, which premieres Friday October 25 at 9 PM on NBC, picks up right where Season 2 left off. Tulloch, who memorably appeared as Alex in LONELYGIRL15, sounds extremely enthusiastic about all the new avenues opening up for Juliette, as well as what she’s gotten to do so far. The following is a combination of a conversation held at a party thrown by NBC for the press and responses from a recent conference call.

ASSIGNMENT X: Did you foresee all of these complications for Juliette?

BITSIE TULLOCH: I knew it couldn’t stay sort of that unspoiled forever, with Juliette being this loving, patient girlfriend. I didn’t necessarily foresee the love triangle. Obviously, both of them being very handsome and attractive men, I was psyched about the love triangle. I think it’s fantastic.

AX: Did you have a preference as to who she ended up with?

TULLOCH: Yes, but I will not tell. I also get asked a lot who’s a better kisser and I know one of them is better. I also won’t tell.

AX: Had you ever played somebody that obsessed before?

TULLOCH: No, I haven’t. I was asked a lot, how do you play a woman who all of a sudden can’t remember Nick? And when I’m in a scene opposite David Giuntoli, I just have to look at him like I’m just meeting him for the first time, like he’s someone I’m just seeing for the first time. And it’s not hard to play opposite Sasha Roiz, who really is a very handsome man, that I might be obsessed with him.

AX: Can you tease at all what the relationship will be like between Juliette and Renard, now that she’s back with Nick and the obsession spell is broken?

TULLOCH: For now, I think it’s a touch awkward, but this is a question that pops up – are we going to see Juliette and Renard together again? I just say never say never, but as far as I’m concerned, it’s really about Nick and Juliette figuring this out together and strengthening their relationship now that everybody knows this information, and going forward together, as opposed to on diverging paths.

AX: You’ve had a couple of big physical sequences where Juliette gets thrown around. Had you worked that intensively with stunts before?

TULLOCH: No. This is the first job where I needed a stunt coordinator. I needed a little bit of help. But it’s fun and I love it and I want more. Episode One and Two coming back [“The Ungrateful Dead” and “PDZT”] are both still dealing with the zombie storyline. They really feel like movies. Norberto Barba, who’s our man producing director [makes the episodes] feel like a one-hour film. And there was a lot of action – I was doing a lot of stunts, which I had a blast with. At one point, Bree and Silas and I were dangling from the top of a container that was fifty feet high.

AX: What are you most excited about in Season 3?

TULLOCH: What I’m most excited about, besides the fact that every script that comes in, I’m like, “Ah, this is so great,” I usually shoot with David for the most part. I’m getting to shoot more with everybody else, because Juliette is now part of the Scooby squad and that’s been really fun for me. David and I have just been having so much fun shooting together this season, because it changes everything for us. The fact that I get to be involved and I get to help him solve storylines. But even just the fact that we can talk about stuff has changed everything for us, and it’s been really great.

AX: In Season 2, you had a lot of scenes where Juliette was by herself, dealing with her amnesia and visions, where you were reacting to elements that would be added later via CGI. Are you going to miss at all doing scenes where the entire focus of the crew is on you?

TULLOCH: No, because I got lonely. It wasn’t that I didn’t like it – I actually did like it as an actor. It forced me to use muscles I’d never used before. Not only because I was working with more green screen, and that’s really just you and your imagination, and you’re putting yourself in the location in the scene and you’re seeing things, none of which are there. It was challenging in a fun way for me. But When I’m on set by myself, we all congregate in our cast chairs in between takes and we’re chit-chatting about, “What’d you do this weekend?” “Oh, the funniest thing happened,” and Bree’s showing us videos of her kids and stuff, and so it almost feels like college. So we kind of prefer the scene where there’s somebody else in it with us. It’s more fun.

AX: When the series started, you were the only female regular. Were you happy when Bree Turner and Claire Coffee went from recurring to regulars?

TULLOCH: Absolutely. The more the merrier.

AX: Do you have a favorite sequence or scene that we’ve seen so far?

TULLOCH: I liked the “Game Ogre” episode, the one with the ogre, because Juliette was able to have a little bit of action, and then Season 1, Episode 15 [“Island of Dreams”], was the first time Juliette was showing her skill with a gun to Nick, and that was really fun for me. It was very fun shooting the first episode back [from hiatus at the start of Season 3], because we were on splits, which means you’re shooting half the afternoon and then all night long until the sun comes up. And it was cold, even though it was in July – it was weird. That was definitely hard on all of us because there were a lot of stunts and the hours were tough. But that one is just so cool. I think Norberto did a fantastic job. It really feels like a one-hour feature film. I think the fans are going to really love it. So that one was fun, but the scripts have really been super-cool and really great this season. I like them all.

AX: The climax of Season 2 ended mid-scene and reportedly Season 3 starts right where Season 2 left off. Did you shoot the entire scene during Season 2 and we’re just seeing the second half of it now, or did you have to come back and remember exactly what you were doing at the end of Season 2?

TULLOCH: Yes. We had to come back and literally just recreate what was going on at the end of Season 2. I mean, literally, we went right back there. But they don’t know if the script is going to change over the summer. Norberto aired [the Season 2 climax, “Goodnight, Sweet Grimm”] for us. Obviously, we’d seen it, but he was like, “You guys have to remember what was going on. Nick is in peril. You don’t know if he’s alive or dead.” But we went right back to the same location, same extras, same stunt doubles and just did it from the beginning.

AX: Juliette is a veterinarian, so besides playing scenes with actors playing Wesen, you have scenes with real non-humans. Do you like working with animals?

TULLOCH: I love it. I’m obsessed with my friend’s bulldog Henry. He’s the love of my life. You know, in the pilot episode, Juliette was a baker. And then I don’t know if it was a chicken or the egg situation, but I was constantly talking about Henry. Then they ended up rewriting it so that Juliette was a veterinarian. Probably also so that she could be more fruitful as far as episodes are concerned, in case that popped up with Wesen. But I love a scene where I get to work with cats or dogs or horses. It’s fantastic.

AX: Do you have a favorite Wesen as a viewer?

TULLOCH: The Eisbibers [ice beavers]. I love them. There’s a wonderful actor, Danny Bruno, who plays Bud, who’s the refrigerator repairman, who I’m so happy for, because he was a guest star who turned into a major recurring [character], and I couldn’t be more happy for him.

[Also], the Wesens from the Christmas episode. It’s such a twisted take on Christmas. You would think that maybe for a Christmas episode, they would sort of lightening things up a bit, but everybody was kind of, “Oh, it’s so scary.” So that one thing is going to be really fun with the fans and that one in particular is really scary.

TULLOCH: A movie called PARKLAND [which was recently released in theatres], opposite Paul Giamatti and Jacki Weaver and Marcia Gay Harden and Billy Bob Thornton and Zac Efron. It’s about the three days following JFK’s assassination. It’s an incredible movie. First-time director Peter Landesman, beautiful script, amazing cast, so I feel very blessed to be a part of the movie.

AX: Do you enjoy acting in period stories?

TULLOCH: I really, really do. I think it’s so much fun to get lost in another time period.

AX: You also did period in the Oscar-winning film THE ARTIST. When you were working on that movie, did you have any inkling what was going to happen to it?

TULLOCH: You know, once I was on set and I realized how magical the film was – the script was incredible, but it took me getting on set to realize this was something special. And I’m not surprised it won the Oscar, I’m really not surprised Jean [Dujardin] won [for lead actor] – he’s fantastic, he was incredible, and I’m just really proud, and hopefully PARKLAND will do the same.

AX: And what would you most like people to experience while watching GRIMM?

TULLOCH: What I’m digging as the series progresses is the mythology. The show runners, Jim Kouf and David Greenwalt [who together created the series with Stephen Carpenter], are really good at mythology, so it’s nice to focus more on mythology and the relationships and the characters. I would hope that Juliette gets more involved actively, like kicking people’s butts – that’s very fun for me, it’s very cathartic.