Oliver Queen must stop a sadistic serial killer before he claims another victim, and also learn the intentions of the mystery woman who now shows up where his hooded alter ego does. 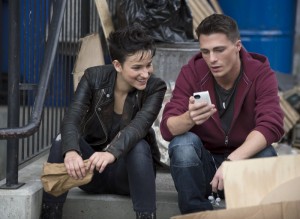 ARROW gives us a serial killer rather than a comic book super villain this week, but despite the much grittier undertones, “Broken Dolls” finds a way to be an entertaining episode that doesn’t overdo the ugliness.

When we last left Oliver Queen (Stephen Amell) he had donned the Hood of his crime fighting alter ego and gone to see his ex-girlfriend Laurel Lance (Katie Cassidy) at her office.  Unfortunately, Laurel has an axe to grind with the Hooded vigilante, and her office was poised to be an inescapable trap, as Oliver suddenly found himself surrounded by a SWAT team with their rifles trained on him.  However, help arrives in the form of the mystery blonde woman in a black mask (Caity Lotz), known to fans of the Green Arrow comic books as The Black Canary.  She uses some kind of “sonic thing” to deafen the SWAT team members and the distraction gives Oliver the opportunity to escape.  He’s unable to catch up to the Canary, however, and is left puzzled as to her motives and identity.

We then return to Lian Yu Island to check up on Oliver’s younger self, as well as Slade Wilson (Manu Bennett) and Shado (Celina Jade), whose partnership is suddenly quite tense.  Shado has brought the malformed skeletons of those Japanese WWII soldiers back to their camp and Slade isn’t happy about it, nor does he seem to be particularly happy that Younger Oliver and Shado have made a romantic connection and he’s the odd man out in this island’s dating scene.  He takes Younger Oliver to “high ground” in order to remain vigilant against the men with guns who’ve come to the Island, even though Oliver protests this and doesn’t want to split apart from Shado.

Back in the present, former Detective, now beat cop, Quentin Lance (Paul Blackthorne) gets an unwelcome blast from the past as he learns that Barton Mathis (Michael Eklund), a serial killer known as “The Dollmaker” has just escaped from prison, and has murdered a young girl in the same manner he killed eight others before Det. Lance caught him the first time.  The Dollmaker forces a special polymer down his victims’ throats that hardens inside their bodies and leaves them posed like porcelain dolls.  ARROW isn’t the kind of show to give us a lot of gore or torture, but this is still pretty creepy and depraved, and given my choice I’d probably have ARROW back away from these super sadistic villains and stick with the Bronze Tigers ad China Whites to keep the mood lighter.  But I suspect that this journey into one misogynist’s weird and horrible psycho-sexual ritual is probably just a one-off event and ARROW is unlikely to go all SILENCE OF THE LAMBS on us every week.

Anyway, since Quentin Lance is no longer a Detective, and his star has apparently fallen quite far at police headquarters, he’s ordered to stay away from the Dollmaker case or be arrested for obstruction of justice.  But since recent events have changed Lance’s opinion of vigilante justice to some degree, he makes the choice to contact Felicity Smoak (Emily Bett Rickards) who puts him in touch with the Hooded Vigilante.  On a rooftop he gives the “Arrow” (the name he now uses instead of “The Hood”) his personal case files on the Dollmaker killings, and quickly Oliver’s on the trail.  He and Lance start their search for Mathis by roughing up his former lawyer, who probably has the best idea of where he might be hiding.  Oliver puts an arrow in the lawyer’s shoulder, (a non-lethal wound, in keeping with his new “no killing” ethos), and we discover that, despite the change of heart in one major ethical area, Oliver hasn’t exactly sworn off torture when it suits his needs.  The lawyer, in pain, gives up The Dollmaker’s hideout and Oliver and Lance go there, only to find they’re too late.

In a scene I found fairly uncomfortable, the Dollmaker talks to Lance on the phone while executing the woman he’s just abducted by force-feeding her the polymer.  Afterwards, Oliver and his friends Felicity and John Diggle (David Ramsey) are even more intent on finding the Dollmaker, and with Lance’s help they find a connection between all of his victims.  Apparently they all use the same skin cream (it’s never really explained why this is important to the Dollmaker, however, although we probably don’t really want to know).  Seeing no other way to use this information to help them, Felicity volunteers to go to stores that sell the cream and serve as bait for the madman.  This plan almost goes horribly wrong, of course, but the fallout is not actually that bad.  Oliver saves Felicity from the Dollmaker, but Lance’s decision to call in the Starling City PD for back-up during the attempted abduction was apparently a poor one, because the confusion the arrival of the cops creates allows the Dollmaker to get away, and also leads to Lance getting arrested for obstruction of justice.

Back on the Island, Slade and Younger Oliver climb a mountain to see if they can spot the armed men who’ve invaded the island, and are fascinated when they see a large freighter in the harbor.  Before Slade can explain to Oliver about how he wants to steal their boat so they can use it to get off the island, the boat starts raining missile fire down on their old campsite, where Shado was hanging out with her skeletons.

Back in the present, one of “Broken Dolls” other major storylines unfolds as Roy Harper (Colton Haynes), now Oliver’s eyes and ears in the Glades, tries to obtain information about the Black Canary.  After chasing her apparent associate “Sin” (Bex Taylor-Klaus) up into an abandoned clock tower, the Canary herself knocks him out.

Also, at the pre-trail hearing of Moira Queen (Susanna Thompson), who’s charged with hundreds of homicides after being part of the conspiracy to create Malcolm Merlyn’s deadly earthquake machine, which nearly destroyed the Glades, we learn that the District Attorney’s office has changed its mind, and it now seeks the death penalty for the Queen family matriarch.  Moira, who, deep down, believes she’s culpable for the deaths caused by Malcolm, doesn’t seem to want to fight this fate.

In the penultimate flashback to the Island, Younger Oliver and Slade run across a grassy field to get to their old camp and save Shado, but explosions occur all around them.  Younger Oliver is knocked semi-conscious by a missile strike near him, but before he passes out he sees Slade struggling, apparently on fire.

At the police station, Laurel goes to spring her dad from his obstruction charge.  Once out of jail, they have a big argument about whether her guilty feelings over Tommy Merlyn’s death at the end of last season aren’t affecting her judgment about “The Arrow,” who she now blames for this tragedy.  Laurel’s in no mood to hear this from her dad, and angrily tells him to stay away from the Dollmaker case.  It’s too late though, because when Lance goes down to the parking garage, the Dollmaker, disguised as a homeless guy, tricks him into getting close enough to hit him with a stun gun.  To Lance’s horror, he discovers his daughter, bound and gagged, on the ground with him.  The Dollmaker had already taken her, and now he has the whole family.

Oliver learns of Laurel’s abduction at his sister, Thea’s (Willa Holland’s) nightclub.  He has Felicity find out where they are being held and gets there right away.  Meanwhile, Roy is woken from unconsciousness and about to be interrogated roughly by the Black Canary, but she sees a text message coming into his phone from Thea, which tells him that Laurel’s been abducted.  Suspiciously, the Canary tells Sin to let him go and bolts out of the clock tower.

At the Dollmaker’s secret hiding place, Oliver, as “The Arrow” shows up in time to save Laurel from being force-fed the lethal polymer, and he chases the Dollmaker out of the room.  In the climactic fight scene, Oliver puts a couple of arrows in the Dollmaker, but wants to send him back to prison, alive.  That’s not good enough for the Black Canary, however, who puts her own arrow into the Dollmaker’s chest, killing him, and flees the scene almost as quickly as she arrived on it.  Oliver leaves this exchange wanting to know more about this mystery woman, especially the broader question of what side she’s on.

“Broken Dolls” concludes with three teases for next week’s episode.  First, we learn Moira is not afraid of dying, and that she’s finally in a good place with her children, despite everything that’s happening to her.  We learn that she’s been keeping some kind of major secret from her kids, however, and presumably she’s comfortable taking it to the grave.

Second, we get to hear the name “Ra’s al Ghul” outside the context of the BATMAN universe, which is a little jarring.  When a character credited on imbd.com as “Dark Archer” (Owen Kwong) comes to tell the Black Canary that Mr. al Ghul wants her to return home, she’s not afraid or intimidated, and simply refuses to go, then kills the guy to keep him quiet.

And finally, back on the island, we find Younger Oliver trapped in a jail on the mystery freighter.  No sign of Slade or Shado.

Overall, “Broken Dolls” is a serviceable, if unspectacular episode.  I give ARROW a lot of credit for keeping things light and moving briskly this time, even though its dark center threatened to suck every thing else about it down to a very ugly place in the early going.  What I’ve long appreciated about ARROW, though, is that there are enough moving parts on this show that when one of its storylines is in some way problematic, it usually isn’t enough to drag all the other ones down.  That said, I’d be more than okay if they decided to lay off the serial killers for a while.