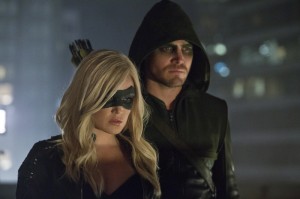 In case you’d forgotten ARROW was based on a comic book, this week’s episode, “Crucible,” went out of its way to remind you by doing something that usually only works in the comic books.  But even though this episode features more suspension-of-disbelief issues than normal, it does a fairly good job of sticking with its otherwise compelling theme, and loads up on the examples of traumatic incidents that lead its characters to unexpected personal transformations, either for good or ill.

We begin with Oliver Queen (Stephen Amell) late to a high-society event because he’s been busy fighting street crime as his hooded alter-ego “The Arrow,” (it’s okay to call him this now, right?  We’re done with “The Hood”)?  In short order we learn that these particular criminals are minions of the gang-lord known as “The Mayor” (Cle’ Bennett) who commands an arsenal of military grade weaponry and uses it to take over The Glades, Starling City’s roughest and most beleaguered neighborhood, and is pretty much a one-note stereotype. Oliver needs to stop this guy, and he puts Felicity Smoak (Emily Bett Rickards), the brains of his vigilante operation, on the case to try and find out where The Mayor’s getting his weapons.  Oliver has other concerns lately, too – like who is the mystery blonde woman, known as The Black Canary (Caity Lotz) who has been showing up on the scene whenever “The Arrow” is in trouble, and saving his bacon.  As Oliver chats with his ex-girlfriend Laurel Lance, (Katie Cassidy) at the party, Felicity comes up with an alternate theory that explains the Black Canary’s actions.  While Felicity had thought the Canary was following The Arrow around, the other common denominator is that she’s also been showing up only whenever Laurel was around, as well.  Maybe she’s fixated on Laurel, rather than Oliver?

Quickly Oliver follows up on Felicity’s hunch and sets a trap for the Canary outside Laurel’s window, where she has been watching her from a distance.  Oliver, as The Arrow, subdues the Canary and unmasks her.  I had thought ARROW might slow-play this big reveal, but they decide to get right to it before the first commercial break, (and this is the part where we learn we’re most definitely in comic book-land).  The Canary is actually Sarah Lance, the presumed-dead sister of Laurel Lance, who’s “death” in the shipwreck that left Oliver stranded on Lian Yu Island six years prior had ostensibly been a huge source of guilt for Oliver and the major obstacle that prevented Oliver from re-uniting romantically with Laurel.  (Oliver was cheating on Laurel with her sister, and no one knew this until the Queen family yacht sank while Sarah was on it).  In any event, I didn’t re-watch Season 1 of ARROW after this reveal, but I’ll bet if I had it would not have turned up much credible evidence that Oliver knew Sarah was alive this entire time, which is the biggest shock to come out of “Crucible’s” big reveal.  Having retconned the ARROW origin story is a little distracting, but it does answer the biggest question I had for this series at the end of Season 1 and the beginning of Season 2, which was “Why are they still giving us flashbacks of Younger Oliver on Lian Yu island?”

In fact, the flashbacks they’re giving us now have shifted location off the island somewhat.  When we last saw him, Younger Oliver had been captured, and he’s imprisoned in a freighter that’s circling Lian Yu Island, and whose crew appears to be focused on acquiring the misshapen skeletons of Japanese soldiers from World War 2 that Younger Oliver and his comrades discovered earlier.  They’re so interested, in fact, that Oliver’s in for even more torture at their hands if he doesn’t tell them where they are, making his flashback experience significantly darker than the one ARROW gave us last season, (which also included torture).  The freighter’s Captain (Jimmy Jean-Louis) actually shoots Oliver in the gut and gives him the first aid equipment to remove his own bullet and sew himself up again.  According to the other (Russian) prisoners on the freighter, The Captain does this to ensure the survival instinct of their prisoners is up to snuff, and this is the first crucible this episode will put one of its characters through.

One of the other crucibles is Laurel’s, who’s had to endure the death of her boyfriend Tommy Merlyn (Colin Donnell), which she blames herself for, and her own near death at the hands of the serial killer known as The Dollmaker in the last episode.  In retrospect it makes sense that she’d melt down emotionally after both these traumatic events, but the specific type of meltdown, with her descending in one episode into someone everyone acknowledges is an alcoholic, though we’ve never previously been given any indication she had a problem with drinking, is too abrupt to be taken as seriously as it should.  It helps that her father, former-Detective Quentin Lance (Paul Blackthorne) is a recovering alcoholic himself and that he arrives on the scene to save her from a career-threatening DUI charge, but the whole alcoholism/addiction subplot still seems to come out of the blue and is not as effective as it could have been had ARROW’s creators had planted some evidence of this particular personal demon in Laurel earlier.

Meanwhile, the person who gets the titular line in “Crucible” is new character (and likely this season’s main villain) Alderman Blood (Kevin Alejandro).  At a gun buy-back event in The Glades sponsored by Queen Consolidated, (Oliver’s idea), Blood talks to Oliver about how everyone goes through a crucible in life, and how some grow and some shrink from the experience, but also that there’s a third type of person that simply enjoys the pain of their crucible and adapts to it as a way of life.  He’s describing Oliver, Sarah, and, apparently, himself here, and it’s a nice moment.  Of course, his philosophical musings are cut short when The Mayor’s gang attacks the gun buy-back and starts shooting people, in a scene that’s kind of ridiculous, but at least has the virtue of being action-packed.  Oliver saves Blood’s life without having to reveal his secret identity, which creates a bond between the two men that should become interesting later.  The Mayor gets away, though.

Fortunately, Felicity figures out how The Mayor’s getting his guns, and it’s through a former foster-brother of his who’s in the military and diverting shipments of weapons The Mayor’s way.  At this point I had to wonder whether ARROW’s Vancouver locations hadn’t given its creators a particularly Canadian perspective on the issue of gun ownership, because in America there aren’t exactly complicated barriers in place to building your own arsenal, (maybe you’ve seen our News lately?), and having access to “military-grade weapons” probably doesn’t give you that much of a competitive advantage over the other gangs who just purchased their weapons legally at the gun shop.  There’s no reason Starling City couldn’t be in Canada, though.  I don’t think they’ve ever been specific about it.  In any event, it doesn’t matter because The Arrow defeats and captures The Mayor and he’s hauled off to jail in the climactic fight scene, big guns or not.

However, The Mayor doesn’t ultimately wind up in jail.  Some faction in the police department takes him to the underground layer of a guy in a scary mask, straps him to a chair, then injects him with some green, glowing liquid in a syringe and tells him he’s about to join an “army of the strong.”  The scary mask guy removes his scary mask and reveals that he’s really Alderman Blood, (so much for slow-playing that reveal, too).

Back on the freighter, Younger Oliver has removed his bullet and survived his crucible, but The Captain tells him to gear up for some more torture.  He’s taken to a cell and it’s revealed that his torturer will be none other than Younger Sarah.  This gives us our first clue that Sarah’s decision to keep the fact that she survived the yacht sinking was motivated by the fact that she didn’t want anyone to know about the awful person she subsequently had to become, (or decided to become).  And Oliver’s decision to keep her secret was probably motivated by the fact that he experienced something similar, and could sympathize.  Still, that’s a pretty big secret to keep from her family for the past year.

While the whole Black Canary storyline gives these flashbacks a dramatic heft they would not have otherwise, bringing back a character from the dead, now as a superhero, is a development I always reserve the right to be incredulous about.  Still, “The Crucible” was taught, fast-paced and focused on exploring it’s major theme, as is the norm for ARROW, and I’m very much inclined to give it some more time to see where it’s going with all these new revelations.