The co-creator/executive producer talks about the show's origins 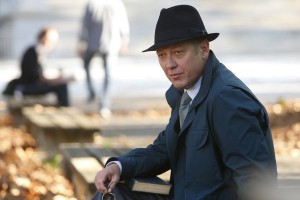 On NBC’s new series THE BLACKLIST, Mondays at 10 PM, James Spader plays former Federal agent-turned-international criminal Raymond “Red” Reddington, who comes in from the cold and offers the FBI intelligence on all his crooked cohorts – but only if rookie FBI agent Elizabeth Keen (Megan Boone) is assigned to be his handler. No one knows why Red is so interested in Liz’s career, least of all Liz herself.

John Fox, who co-created THE BLACKLIST with fellow executive producer Jon Bokenkamp, takes some time to talk about how the series came into being and where it may – and may not – be going.

ASSIGNMENT X: Are you the originator of THE BLACKLIST?

JOHN FOX: Yes, I am. The idea began with me.

AX: How did you come to work with the producing group on the show?

FOX: I actually had known them over the years. The idea was mine, but it came out of getting caught up with [Jon] Bokenkamp one day. I pitched him the notion, and then he and I together just began to put the meat on the bones and then build it from there. And then John Eisendrath was partnered up with us, and I don’t know what we would do without the guy – just phenomenal.

AX: Are you the show runner?

FOX: John Eisendrath is the man who holds the title of show runner, but we all in a de facto way are the show runners of this show.

AX: The original concept for THE BLACKLIST was a unit of the FBI that looks for major bad guys. Was the idea that they were using a bad guy to do that part of that?

FOX: Absolutely. That was in the DNA of the idea that I had come up with, yeah. I said this before, but we felt like [Red] would be the Rosetta Stone of crime, just unlocking everything for the Feds, his past crimes and, most importantly, future crimes. From there, we just built out the idea. Red’s criminal tentacles extend into various surprising places. I think Red will always surprise us with just how pervasive his reach can be.

AX: When did the female FBI agent who Red wants to mentor become part of the story?

FOX: That was a creation of Jon Bokenkamp’s. He really fell in love with the notion of a young, very skilled FBI agent being mentored by this uber-criminal, and this criminal kind of testing her moral compass.

AX: Do we know whether Elizabeth Keen is really Red’s daughter?

FOX: No. And I think it’s okay if the audience wants to believe that. I think that’s a question that won’t be answered for a very, very long time.

AX: Well, he does know her childhood …

FOX: He does, intimately. To a scary degree.

AX: So he could be her father?

FOX: I would say that is the easy answer and this show is never about the easy answer. So again, if the audience wants to believe that, we are all for that. And down the road, well, we’ll see what happens.

AX: There are some huge action sequences in THE BLACKLIST. Are the sorts of things they’re solving all going to involve massive jeopardy to life and limb?

FOX: No, not always. I mean, sure, there will be criminals of the week, or “creeps of the week,” as we call them – they’ll be heightened, kind of BATMAN villains, with stakes that are huge. But then there will also be villains who operate on a much more insular, intimate scale, where the stakes become very personal.

AX: When did James Spader come into it? Did you have any specific actor in mind when you were first writing the character of Red?

FOX: We didn’t have anybody in mind when we wrote it. James is somebody that we loved and that we thought about very early on, but at the time, we were told he wasn’t available. Then, late in the process, we heard he was available and we pounced on it, because James embodies everything we had ever imagined for the character.

AX: And what about the Elizabeth Keen character? How many people did you look at for that role? Did Megan Boone bring to it what you’d always envisioned, or did she bring to it something you hadn’t envisioned, and you went, “Oh!”?

FOX: We read a lot of actresses for the role of Liz, but Megan we read early on, and she’s somebody whose reading really stuck with us, and we circled back to her toward end of the process, and we thought, “You know, that girl Megan, she’s got something.” There’s a quality that she has where she can be strong, yet incredibly vulnerable at the same time. That’s just something that’s innate in her, and that’s what we responded to.

AX: Are the cases going to be arced?
FOX: That’s a very good question. I think occasionally we will do arced cases that extend over two, three episodes.

AX: You said, “Nobody is what they appear to be.” Does that include Harry Lennix’s FBI boss character?

FOX: Yes. That includes Harry, it includes Megan, it includes Diego [Klattenhoff as FBI agent Donald Ressler] – everybody has secrets. And I will say, again, it’ll never be the obvious answer.