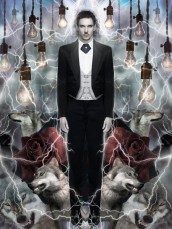 Sumptuous production of a so-far-okay plot 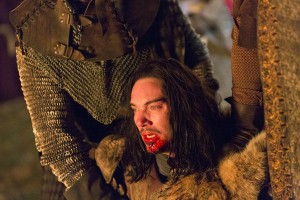 By now, so many writers, directors, actors et al have had a go at Bram Stoker’s creation that saying something is about Dracula is about as helpful as saying the characters wear shoes. In what is being billed as a limited series, NBC’s new DRACULA, developed by Cole Haddon – who also scripted the premiere – takes a number of elements from Stoker, discards others and comes up with enough conspiracies, revenge and counter-revenge plots to fuel the enterprise for a reasonable number of episodes.

In 1891, Dracula (Jonathan Rhys Meyers) is brought back from being a skeleton. Ten years later, he’s inLondon, posing as wealthy American industrialist Alexander Grayson. Dracula is actually here to exact vengeance on the Order of the Dragon, a rich and powerful cabal that ruined his life five hundred years ago and is still going strong. However, when Dracula/Alexander throws a ball to introduce himself toLondonsociety, he is transfixed by beautiful medical student Mina Murray (Jessica De Gouw). Mina is engaged to penniless crusading journalist Jonathan Harker (Oliver Jackson-Cohen), who frets that he’s not good enough for his fiancée – which is what Mina’s friend Lucy (Katie McGrath) keeps telling her. Mina is studying anatomy with the redoubtable Dr. Van Helsing (Thomas Kretschmann), who has some issues of his own, though perhaps not the ones we’re expecting. Then there’s Lady Jane (Victoria Smurfit), who is part of a team making sure the general public never learns of the existence of vampires.

There’s plenty here, plus Alexander’s protective manservant Renfield (Nonso Anozie), who is not only sane but capable of advising Alexander on the correct way to pronounce “schedule” if he’s going to pass as an American. It’s a nice touch, and there are others, including a seduction scene in an opera booth that’s successfully sexy. The ball sequence under Steve Shill’s direction is gorgeous and the actors are all attractive, with Jackson-Cohen making Harker a surprisingly compelling figure (the character tends to fade into the wallpaper in a number of versions). The artwork in the opening credits is also striking and noteworthy.

While DRACULA isn’t camp, there’s a sense of purple prose here. Some glances and shots are held just a fraction too long, overemphasizing moments that we have absorbed. More problematic is that at the end of the pilot, we’re not rooting for or against anyone in particular; Alexander hasn’t charmed us yet, and while we know what his foes’ forebears did and understand the current crop are unscrupulous industrialists, the people he’s targeting now haven’t merited audience wrath so far.

There are a lot of vampire shows on TV or about to return: THE VAMPIRE DIARIES, THE ORIGINALS, BEING HUMAN, TRUE BLOOD. At least at present, DRACULA shows no signs of flying with the bat pack, as – unlike on all the other shows – the main character isn’t part of a larger vampire culture. This is more like a period rendition of REVENGE with a male protagonist who can extend his teeth and eviscerate people. Alternatively, since vampirism doesn’t seem to be a philosophical issue in the pilot, it feels less like a vampire story than another show about somebody with superpowers coming back to town to even old scores. If this is your thing, sample DRACULA and determine whether this one is for you.