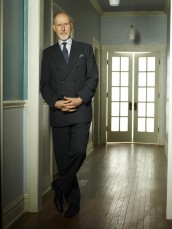 The actor also talks about his Emmy-winning turn in AMERICAN HORROR STORY: ASYLUM and more 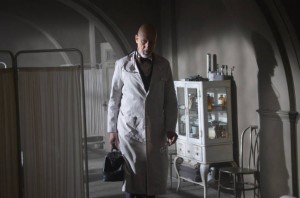 In ABC’s BETRAYAL, Sundays at 10 PM, James Cromwell plays business tycoon Thatcher Karsten, who has all sorts of problems. His son T.J. (Henry Thomas), who is mentally challenged after an accident, has killed one of Karsten’s business associates. Meanwhile, Karsten’s married lawyer Jack (Stuart Townsend) is having an affair with photographer Sara (Hannah Ware), whose husband is a district attorney dying to nail Karsten to the wall for shady business dealings.

Cromwell has played all sorts of people, from the benevolent farmer Arthur Hoggett in BABE, which gleaned him a Supporting Actor Oscar nomination, to his recent Emmy-winning turn as Nazi scientist turned monster maker Dr. Arthur Arden in AMERICAN HORROR STORY: ASYLUM.

Present at the Television Critics Association press tour, Cromwell is happy to talk about both Karsten and Arden, along with his enduring passion for Shakespeare’s KING LEAR.

JAMES CROMWELL: He was a monster, an irredeemable monster.

AX: Can you describe the difference between being simply bossy and imperious like Thatcher Karsten and being monstrous?

CROMWELL: Yeah. There are Mengeles in the world. We know that. I’m not interested in people whose humanity is so corrupted that I can’t recognize it. Now, I know that smarter people than me, more evolved people say, “Of course, there’s a Hitler in all of us.” And to a degree, that’s true. It didn’t seem to me that television and that story was where we were really going to analyze that guy in depth. I thought, “If I commit myself fully and emotionally, and with a certain amount of verisimilitude, I’m going to drive myself nuts.” I think that’s what killed Heath Ledger – I think he identified with that character [the Joker] and played it every day and I think it’s really injurious on your psyche to carry around that kind of evil if you take it seriously – so I sort of looked at it as a burlesque.

Now, I do not believe that Karsten is burlesque, because I see him every day – Jamie Diamond, the president of Goldman-Sachs, Ben Bernanke – I see these people, I see congressmen. I saw Brennan lie to Congress on his confirmation hearing. I’m really interested in that, because I know he goes home and he has children and he has concerns and he’s human and he thinks he’s doing the correct thing, that that’s best for the country. I happen to really disagree with him. So I’m interested in exploring [the concept of] we are not our worst impulses, the crimes that we commit. We’re larger than that. So there has to be something redeeming in him. As Shakespeare said, there’s something redeeming in Lear, although the way I would play it, from the first beat, you would not know that.

AX: Sometimes the world doesn’t see the redeemable side of people …

CROMWELL: Without a doubt. We don’t see it. Shakespeare also says in LEAR, “They cannot see because they do not feel.” The feeling is empathetic. What we don’t feel in other people is empathize with them. So someone who commits something really heinous – the killer of Trayvon Martin – you still have to empathize with that guy as a human being. I happen to believe he was guilty, but all those men in prison who’ve committed those crimes still need out compassion. So I think we’re always capable, regardless of how damaged the person is, of being compassionate, forgiving and loving.

My intention as an actor is to hold the mirror up to nature, “to show virtue her own feature, scorn her own image and the very agent, body of the time, this foreign pressure.” We want to see ourselves. If I make myself into a monster, nobody recognizes it; if I have a judgment, like I did start out having a judgment about George [H.W.] Bush [who Cromwell portrayed in director Oliver Stone’s W.], Oliver Stone said to me, “You’re not going to be able to play that character if you have that much judgment.” He sort of beat the judgment out of me and made the story about a father and a son, rather than my conception of the Bushes’ politics, which were really not the thrust of this. He didn’t want a debate – he wanted you to experience that family as a dysfunctional family for a reason. There was a cost. That cost impacted all of us.

If you don’t play a human being, you do a caricature, you do lose your audience, because then they watch it for five minutes and understand all of it, or think they understand all of it. We see pictures of people of power and position and we think we know them, but of course we don’t know them as human beings. When they’re dramatized and there’s a narrative, then you get the chance to show all the colors – much more interesting, much more compelling.

AX: Have you gotten to play Lear yet?

CROMWELL: [laughs] If somebody is unwise enough to ask me about LEAR, I’ll tell them. I have been trying for nine years to get the production done. I have a concept for LEAR, I have worked through it, I have learned the play, I have made sort of a montage of the play. I know the moments that I want and I continually work on it. I put it out to forty-five theatres in America, I said, “I will do this play for free, and I’ll do another play if that will help your subscription.” And I got one answer. One, and he turned out to have won a Tony and he didn’t go back to his theatre. So I’m always hoping, and I keep on putting it out there that someone will say, “We’d like to see your Lear.” 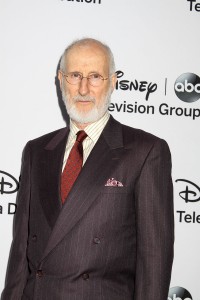 AX: Back to BETRAYAL, Karsten seems conflicted in his pride over his sort-of adopted son Jack, and his feelings about his biological son T.J.. Does he feel guilty about that conflict on some level.

CROMWELL: I don’t think he feels guilty in terms of Jack. Jack can take care of himself, Jack is not blood. A big thing for [Karsten] is blood, and the fact that he, like Lear and Cordelia, put all his eggs in the one basket. It was to be T.J., and he would take over, and be seamless, and it would be a dynasty, and now the dynasty is gone, but it’s tantalizingly still there, and so I have these expectations, which cause me to be impatient and abrupt and hurtful, and I think that’s the much more interesting relationship. I think when I get the opportunity, I will throw Jack under the bus.

AX: Does Karsten ever feel guilty about how he treats T.J., or does he even see that he’s treating T.J. that way?

CROMWELL: It’s like Lear. He snaps out, and in the next scene, he says, “I shouldn’t have done that.” So he knows right away that his anger has gotten the better of him. So I think he regrets it. At least, if you want to see the heart of Karsten, it is in his self-awareness about T.J.’s feelings. He doesn’t apply that to other people, so yes, I think he feels guilty and I think he feels remorse for his anger.

AX: When you’re not acting, you’re often involved in activism on behalf of animals and anti-nuclear causes, and you’re willing to go to jail for your beliefs. How long were you in jail when you were arrested?

CROMWELL: Well, I’ve been in jail a couple of times. They don’t keep you very long. I think they only kept us four or five hours. They wanted me out of Madison [where Cromwell was part of a protest against experiments on cats at the University of Wisconsin], because when my trial came, they didn’t even invite me back, because they knew that I would probably go right over and do it again, which I would have done.

CROMWELL: I have a wonderful film coming out called STILL MINE, which no one should miss, because that is a really great film.

AX: Is there anything else you’d like to say about BETRAYAL?