Agreeable, if the tiniest bit preachy 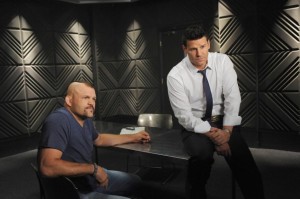 In “The Lady on the List,” BONES presents us with a scenario that is not so much ripped from the headlines as teased from yesterday’s papers. The episode centers on the murder of a Randy Pausch-like teacher, a man dying of cancer who has created a series of inspirational videos that Booth (David Boreanaz) finds very touching. At the same time, Sweets (John Francis Daley) becomes jealous of an FBI psych profiling computer program, while Brennan (Emily Deschanel) worries a little about planning her wedding with Booth.

After ruling out the suspect provided by the computer program and the victim’s wife (even though she inadvertently gave her husband arsenic), the team deduces that the culprit is the victim’s videographer/video editor, who was angry at not being included in what was going to be a very profitable will. It’s not entirely clear whether the episode means for us to feel that the culprit has a right to be angry, albeit not homicidally so, as the deceased’s estate will make millions off the videos that our bad guy shot and cut, apparently for free. Instead, the dead man’s belief in “independence” is cited in his decision not to pay his erstwhile friend for his work. There’s a difference between providing charity and compensating someone for their labor that the dead man (and perhaps the writers, if they’re taking his side) seem not to grasp.

There are a couple of other glitches as well, including Booth insisting to his vegetarian bride-to-be that pigs in blankets be served at the wedding, and Hodgins (TJ Thyne) wondering why a wild hawk being held in the lab is sick. The bird turns out to be ill because of the arsenic it has ingested by eating the victim’s flesh, but keeping a wild raptor in a smallish glass cage would make it sick in any event. Finally, given what the cause of death turns out to be, it seems to take our crack team forever to figure out the key clue that leads to the bad guy.

On the positive side, the brilliant though obnoxious lab assistant Dr. Wells (Bryan Klugman) is back with his insulting, smart observations. He’s an entertaining figure, and Klugman’s timing is perfect. Chuck Liddell also has a nice bit guest-starring as himself. Brennan’s reflections on her own happiness – she doesn’t have a bucket list because she’s got everything she wants – are endearing, and her reaching out to Angela for some wedding reassurance is charming. Brennan’s confused blurting out that the wedding will not be based around anyone else’s schedule also demonstrates that her essential nature is still with us. Even though the affirmations are a bit generic, the general notion of finding worth in life through its ending is also a plus.

“The Lady on the List” is overall a pleasant BONES episode, neither a standout nor a sub-performer.