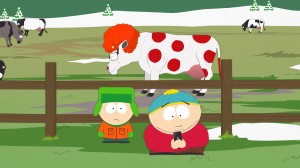 The seventeenth season of SOUTH PARK is about half way through its run, but the episodes, like usual, have been wildly uneven. The latest, “Ginger Cow”, is hands down the worst this year.

Playing into the notion of peace in the Middle East and Cartman creating chaos once again, it’s short on laughs and long in execution.

The episode begins when Cartman claims he saw a “Ginger Cow” in the pasture – a cow painted red and given a red wig. Apparently, this is a religious sign for the “end.” Not Armageddon, but the end of warring religious ideals, and a time of global peace between all religions.

Cartman didn’t expect this, and wants to tell the truth, and destroy all the peace, but Kyle, deciding to be the martyr, let’s Cartman fart in his face and force Kyle to do and say things to keep his silence.

Things go bad of course, and unrest is restored. Very unfunny, except for the gag where all the Middle East religions form a new religion/symbol and it’s the logo for Van Halen. Naturally Van Halen performs.

While I love it when SOUTH PARK branches out and tries to do things on a large scale like this, it just feels like we’ve been there/done that, especially with the Kyle/Cartman rivalry.

There have been far better episodes this season, but this, by far is a definite low.