The actress also talks TROPHY WIFE and ONCE UPON A TIME 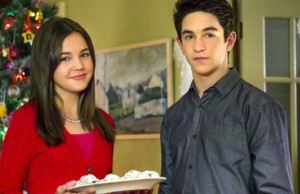 Bailee Madison has racked up an impressive list of acting credits at her current age of fourteen. She has starred in the feature films DON’T BE AFRAID OF THE DARK and JUST GO WITH IT and has a recurring role as Young Snow White on ONCE UPON A TIME (series regular Ginnifer Goodwin plays the character as an adult).

Just this year, the Florida-born actress has appeared in the feature film WATERCOLOR POSTCARDS, did an outrageous guest turn on Fearnet’s horror comedy series HOLLISTON and has a series regular gig on ABC’s new half-hour comedy TROPHY WIFE. As if all this weren’t enough, Madison also stars in Hallmark Channel’s new telefilm PETE’S CHRISTMAS, which debuts Friday November 8 at 8 PM.

Madison is in attendance at a Hallmark event for the Television Critics Association, where she’s happy to talk about a variety of her projects.

ASSIGNMENT X: What is PETE’S CHRISTMAS about?

BAILEE MADISON: PETE’S CHRISTMAS centers on a middle child, played by Zachary Gordon, and basically, he doesn’t really get the meaning of Christmas. He’s struggling with that, so when his grandfather comes in to give him a box that’s actually empty, and he opens up that box, he starts reliving Christmas over and over and over again. So it’s him at first thinking it’s a curse and really not knowing what to do about it, and then he starts taking it for granted, and then when he meets my character Kate, she whips him back into shape and teaches him the goodness of Christmas and how he can really use this for good and make a difference in this thing that’s been given [to him].

AX: Do you like playing a character who’s more a teacher or more a student? It sounds like your character Kate in PETE’S CHRISTMAS is more of a teacher.

MADISON: She is. She’s very wise and she’s struggled with loss – she lost her dad and I feel like it’s fun to be both [teacher and student]. I personally love the teaching aspect of it, because you get to play someone who’s kind of mature and wise beyond her years, and has the wisdom in this little body, but I love both. Every character is different. But it was fun, because working with the director Nisha Ganatra, we really found parts of her that weren’t written in the script and the relationship between Pete and Katie, we kind of took to another level, we kind of created a sweet little love story in a way that’s very innocent and fun.

AX: Is Christmas a special holiday for you in real life?

MADISON: Oh, incredibly. It’s a huge tradition in my family. Every Christmas Eve, my sister and I switch pajamas, and we’re all matched, the girls in the family, and our kitchen is always overflowing with cookies and pies and food and Christmas music is always playing. It’s the one time of year that we all make sure that we’re all together, no matter what part of the world we’re in – we all get together to celebrate.

AX: In a very different vein, you guest-starred on an episode of HOLLISTON as a young girl who pretends to be older so she can blackmail her boyfriends, who think she’s their age.

AX: How did you wind up doing that?

MADISON: You know, it’s so funny, because 2011, I was at the Igor Awards, and they were presenting me with an award for my work in DON’T BE AFRAID OF THE DARK and [HOLLISTON creator/producer/star] Adam Green was there, introducing someone who he’s worked with, and she was accepting her award, and I just wanted to go up and meet him, because I loved what he said, and myself and my new manager, John Carabino, who’s great friends with him, and he said, “Would you be willing to do this role?” I read the script – I thought she was a hoot. It wasn’t that I was looking to do something different, it was the fact that I thought it was really funnily written and I loved the people who were involved and it was exciting to just go to set and have fun and just be honestly crazy.

AX: Are you continuing to do ONCE UPON A TIME?

MADISON: I hope so, I hope so. With the great new ABC show TROPHY WIFE, I’m really excited to be able to be on one of my other favorite networks besides Hallmark and to be able to grow on their channel every day, but I love being Snow more than anything in the world, so I hope that they’d be willing to let me back and it’s always so exciting. Everyone was Tweeting about it when the news broke [of Madison’s casting in TROPHY WIFE] that they hoped they weren’t going to lose young Snow, which was really sweet of them.

AX: Is it difficult sharing a role with somebody else and trying to …?

MADISON: Mimic? I cannot say enough words about how much I love Ginnifer Goodwin. I think she’s an incredible talented woman – so kind, so sweet to me, and so poised. I feel like she is the definition of Hollywood class. So to be able to be her as a young girl is such an honor, and especially young Snow White, is so amazing. But every time I’m on, I watch her videos of previous episodes and I pause the screen to see how she arches her eyebrows and practice the way that she speaks and the way that she breathes and there’s definitely a lot that goes into it because I love the role so much, and the feedback for each episode has been so amazing that I don’t want to disappoint anyone, especially Ginny and the cast and the crew and the fans of ONCE, so I just hope that if I go back that they like it again, so I appreciate everyone being so nice about it.

AX: How are you enjoying TROPHY WIFE?.

MADISON: I read one of the episode scripts before I met with them. I love it already and I love the concept. I think the cast is amazing, I love [leading lady] Malin Akerman and I think it’s something that’s really refreshing to TV – it’s something that shows a dysfunctional yet loving [family], and you have two ex-wives barging in and it’s fun.

AX: What can you say about your character going forward?

MADISON: I don’t know. Honestly, I’m just now starting to talk to everyone. I can tell you, though, from what I’ve read so far, she’s a girl that everyone is going to want to just take care of. I think she’s going to have her ups and downs, I think she’s going to have fun and I feel like part of her with that is, it’s not because of who she is, it’s because she wants to be someone that’s cool and in the in crowd, the popular crowd, so I’m so thrilled with what they have in store and they’ve said they’re writing some amazing things, so I’m excited to be able to read it and do it and have you guys see it.

AX: Is there anything else I should ask you about right now?

MADISON: I’m involved with the Alex’s Lemonade Stand Foundation. It’s for pediatric research, so I’m the national spokesperson. It’s for childhood cancer. It was founded by a little girl named Alex Scott, who was diagnosed with neuroblastoma the day before her first birthday. At four years old, she asked her parents if she could have a lemonade stand, and they asked why, and she said, “It’s not for me, I want to help the doctors find a cure.” At the age of eight, she lost her battle, but she raised over a million dollars for pediatric research, so we’re basically saying you’re never too young to make a difference, you can hold a lemonade stand – all those proceeds go to fight childhood cancer. I love this foundation – we have some fun stuff in the works.