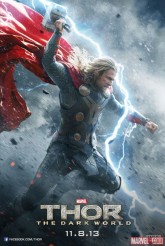 Mostly fun, though the pacing is congested and it lacks the Shakespearean qualities of the first film 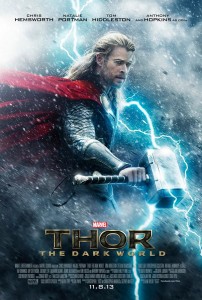 THOR: THE DARK WORLD begins with Anthony Hopkins as Odin, King of Asgard, providing a voiceover preface with enough exposition to make us worry that the story has stopped in its tracks before it has even begun. It’s not like what he has to say doesn’t get reiterated frequently throughout the movie. Thereafter, the film refrains from tripping itself up again quite so thoroughly, but it gets things off to a clunky start. Even so, there’s a lot of action, some solid laughs, several genuine twists that catch us off-guard and some gorgeous design of both the practical production and CGI varieties.

Thor (Chris Hemsworth), as viewers of the first THOR and THE AVENGERS will recall, is the crown prince of the alien world Asgard. On his first trip to Earth, with the help of scientist Jane Foster (Natalie Portman), her mentor Dr. Erik Selvig (Stellan Skarsgard) and their intern Darcy (Kat Dennings), Thor saved the world from an alien invasion caused by his foster-brother Loki (Tom Hiddleston). On Thor’s second visit to the world, he and the rest of the Avengers saved our world from an alien invasion caused by Loki.

In THOR: THE DARK WORLD, Thor is called on to save the entire universe, and this time, it’s not Loki’s fault. The Dark Elves, led by Malekith (Christopher Eccleston), ruled the universe before there was light. Once utter darkness no longer prevailed, Malekith and his people were defeated by Odin’s father. A metaphysical substance known as the Aether would allow Malekith to defeat the Asgardians and bring absolute darkness back. The access point to this substance turns out to be hidden on our world, and exactly where and how it shows up brings Jane back into Thor’s story.

There’s a lot to like here, starting with Hemsworth’s hearty, sincere Norse hero. Hiddleston gets to run the gamut here with Loki, and the scenes between the two actors/characters are particularly entertaining. Thor’s friends don’t get as much to do this time, with Tadanobu Asano’s Hogun left back on his home world early in the running. Still, without any direct dialogue to this effect, it’s made clear that Thor’s warrior woman companion Sif (Jaimie Alexander) is deeply disappointed in her prince’s continuing attraction to human Jane, and Zachary Levi, replacing the original THOR’s Josh Dallas as Fandral (Dallas is off being Prince Charming on ONCE UPON A TIME these days), is clearly having a blast with all of the fighting and camaraderie. Ray Stevenson doesn’t get much to do but is still excellent as Volstagg. Idris Elba as Heimdall remains tremendously imposing.

There are also some unexpected and delightful asides, like Chris O’Dowd as Jane’s very patient suitor and the way Stan Lee’s cameo is worked into the action. Rene Russo has what is probably less screen time than in the first film as Odin’s wife Frigga, but her scenes and character impact are much greater this time around.

However, those who were excited by the Shakespearean undertones of the first THOR will not find them continuing to reverberate here. This time, the stakes are a lot less personal, since Thor and Malekith have never met before, and moreover, Malekith isn’t given much personality beyond wanting to return things to what he views as the righteous old days. This is doubly a pity, as Eccleston is a terrific actor – although Malekith figures heavily in the plot, he doesn’t have much to do in dramatic terms.

Although there is some interesting sleight of hand, for the most part, THOR: THE DARK WORLD is about good guys who are, with no internal conflict, determined to stop the bad guys. There’s a reason this is a tried and true formula, but for good and ill, most of the movie seems constructed to justify each new battle. Also, the action and dialogue scenes aren’t balanced with one another; both sorts of scenes seem to go on too long without punctuation. There are also a few events that are presented without explanation, even though they are of great importance within the story.

Enjoyment, therefore, depends on how much one wants to see these specific actors/characters in these situations, because most of the situations are well-staged but don’t break much new ground – figuratively, that is. Literally, explosions blow holes in ground, walls, ceilings, you name it. People – and there are plenty – who like to watch things go kaboom are well and frequently served here. The 3D is good, though it doesn’t seem to add much to the experience.

Anyone who wants to see the complete THOR: THE DARK WORLD should sit through all of the credits, since the film has a mid-credit sequence and a post-credit sequence, both of which are engaging in their own rights and also suggest directions in which future films may go.

THOR: THE DARK WORLD looks great and is moderately good fun, but it lacks the verbal snap and visceral charge of some of its Marvel relatives.

Related: 5 Characters and Stories we want to see in THOR 2