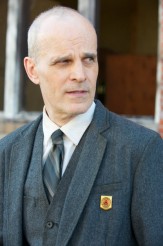 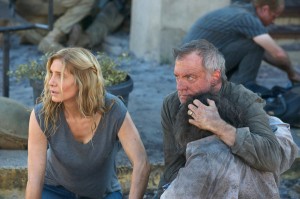 One question I found myself asking during the latest episode of REVOLUTION, entitled “The Patriot Act,” was why hasn’t Miles’ (Billy Burke) hand healed at this point?

Everyone else that has had injuries have made remarkable recoveries. Rachel (Elizabeth Mitchell) had both a broken thumb and an arrow to the shoulder and shows no ill will from it. That chick that has been running with Neville (Giancarlo Esposito) took a gunshot to the gut and has nothing to worry about other than a stained shirt. Charlie (Tracy Spiridakos) has been beaten, abused and everything in-between but is still kicking. Yet, Miles can’t get over a broken hand after numerous episodes after having it shattered. I guess it just is a plot device allowing him to look more vulnerable and less of the bad ass he was in the first season but still let’s get over this thing already.

“The Patriot Act” was all about the ramifications of finding out that Rachel’s dad and Charlie’s grandpa, Dr. Porter (Stephen Collins), was a Patriot and has been leaking information to the group in regard to what the rebel group has been doing – alerting the Patriots to Monroe’s (David Lyons) plan to frame them in order to start a war and then leading them to Monroe’s location, which made Rachel fake his death in the previous episode.

Dr. Porter agrees to turn over Aaron (Zak Orth) to the evil Doctor guy in order to save his daughter from getting tortured or worse – as shown in flashbacks where he helped the Patriots do that very thing to unlucky people. Miles, being Miles, figures it out and they have an escape plan for Aaron since that’s what the Patriots want because he has the key to controlling the nanotech – even if he doesn’t really understand it.

We saw once again Aaron play CARRIE and lit a bunch of red shirts on fire when his main squeeze is in trouble scarring the bejesus out of her and impressing Monroe in hilarious fashion.

While this was a place setting episode for what is to come in future episodes it was a decent episode with enough stuff to keep it interesting. Collins also did a very good job of being the unwilling Patriot that immediately regretted his decision to join the group after seeing that they will do anything to get what they want.