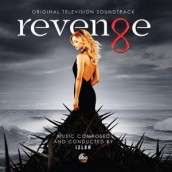 Murder, greed and betrayal have always been part and parcel of ABC’s primetime television schedule, especially when dealing with wealthy characters – whether they are a jet-setting dynasty or a bunch of desperate housewives. But among those well-heeled heels, REVENGE has stepped forward as the mother of the network’s female-skewing payback shows, or rather a daughter out to make her dad’s tormentors pay.

Now about to claim more villains in season 3, a big part of REVENGE‘s nasty touch of class continues to be come from the singularly credited composer Izler, who’s made sure to get an orchestra to help embody the saga’s femme fatale. But while there are some sleek film noir stylings, the ever-conflicted nature of its heroine’s mission gives an abundant amount of approaches to REVENGE, making its first score album a particularly enticing listen. Propulsive action rhythm a la Jason Bourne segues to the luxurious strings of the Grayson family, while eerily percolating samples give way a poignant, piano and violin sense of feminine regret. REVENGE‘s cues remain torn between dark justice and tender regret in this way, with Izler reaching the height of cleverness with a determined, ever-angering requiem rhythm for “Sins of the Mother” that seems ready to burst into an aria by Dame Giovanni.

Through its intricate steps towards a lethal end game, REVENGE‘s score impresses with its high orchestral production value. For unlike a lady who knows her hidden identity is the best way to strike back, Izler realizes that if you got real players at your TV scoring disposal, then it’s best to make use of one’s luck with no subterfuge whatsoever. That full, involving symphonic sound is right out in the open for everyone to hear in REVENGE.

Clink on the link to Purchase REVENGE soundtrack