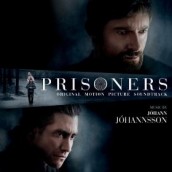 It’s particularly cool when Hollywood takes a chance on foreign talent, whether it lies across the cold Canadian border with Quebec director Denis Villeneuve, or in Iceland itself in the hiring of composer Jóhann Jóhannsson. This artistic gamble that yields depressively mesmerizing results as two sets of parents cross the moral, and legal boundaries to find their kidnapped children. The results of PRISONERS are sure to entail plenty of church confessional time for them, hence the “holy minimalism” approach taken by Jóhannsson. His PRISONERS is certainly one of the more interesting scores to appear since Johnny Greenwood’s brilliantly bizarre THERE WILL BE BLOOD, while doing far less – if that’s even possible.

For while there’s a striking four-note theme here, PRISONERS basically hangs out to languid, hypnotic effect, a la Arvo Part’s hauntingly continuous, slowly swelling melodies that so effectively played the plane crash sequence in “Fearless,” or even the cosmic beam sound that became THE THIN RED LINE‘s madness of war. But most of all, PRISONERS is like a downbeat, whispered sermon as to the sins of guilt by association, complete with a church organ to get across the religious effect, while rumbling electronics and aching strings reach the lower pitch registers for maximum, gut-wrenching power that are far more about playing tortured emotion than viscercal suspense. Oftentimes, the drone of PRISONERS  reaches a continuous pitch that doesn’t so much recall music as it does the tone of the The Tall Man’s inter-dimensional dwarf canister transportation room in the PHANTASM series. But that being said, there’s a big difference between music that doesn’t doing anything and a score that communicates riveting ideas with the most deceptively minimal of efforts, the latter category of which PRISONERS fits into. It’s “art” music that just happens to be a film score, and pretty much completely outside of the box in a cool Icelandic way, even as someone’s being tortured with hot water inside of it.

Clink on the link to Purchase the PRISONERS: Original Motion Picture Soundtrack