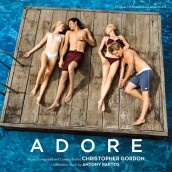 You can say there’s something more than uncomfortable about two beautiful best friend cougars getting it on with each other’s sons, even if the pseudo-incest angle is somewhat muted by the fact that these strapping Aussie surfer lads are barely legal at the start of their affairs. Yet ADORE’s mixture of inappropriateness and eroticism is actually beautifully transfixing to look at, let alone listen to with the soothing score by Christopher Gordon and additional composer Antony Partos to lend lyrical heat to what could be far more musically sensational and explicit given the subject matter.

Gordon (MASTER AND COMMANDER, MAO’S LAST DANCER) and Partos ((ANIMAL KINGDOM, 33 POSTCARDS) have shown their melodic good taste for movies down under, often taking subtle approaches to characters the world would consider immoral. It’s exactly their emotional even keels that let ADORE glide about its azure ocean waters and neatly arranged bedrooms with mesmerizing beauty. With rhythmically alternative guitars to connote youth, and strings and piano to represent women mature enough to know better, Gordon and Partos bring together its stars’ toned bodies with both sensuality, and gentle resistance. For if their characters’ can’t help themselves, then the music can’t either, as one gently gliding cue after the other creates a blissfully poetic feeling of romantic paradise. But there’s also as much of a dark sense of unease and longing to Gordon and Partos’ gorgeous themes, whether lushly expressed through a classical orchestra, solo piano or ethereal samples. The fact that a full-on tempest never arrives to recriminate ADORE’s transgressions shows that sometimes the best dramatic scoring never has to say too much to communicate high emotion.

Given the soothing poetry of ADORE,it’s easy to hear how its son-swap attraction is impossible to resist. Thankfully, Gordon and Partos can’t make us object (at least melodically) with a smart, mesmerizing tone that isn’t remotely tuned in to the land of Skinimax, creating a score that’s all the more arousing by going for the head, as opposed to below the belt.