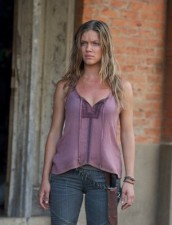 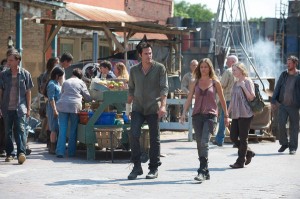 There were times during REVOLUTION’s latest episode, “Dead Man Walking,” that I had a familiar feeling that the show was once-again delving back into the old format of the eternal battle of a group of rebels taking up arms against a more powerful entity.

That same formula that dragged down the show big time in the first season. However, the whole aspect of Monroe (David Lyons) finally getting his comeuppance for his crimes really turned the whole episode around. Sure, there’s no doubt that Monroe is in fact not dead – Rachel (Elizabeth Mitchell) being the one to supply the juice for his execution and then digging his grave tells the tale there. Plus, they showed his face in the previews to the next episode.

So they played the whole gave him a drug to mask that he was really dead trick. While that’s an easy cop-out, I understand in the grand scheme of things why they did it and that the direction of the show needs a character like Monroe. Like I said last week, he’s got talents that others on the show don’t have or at least aren’t willing to use. His torture of a Patriot to get information was brutal but it did the trick.

I like that Rachel’s father was a surprise twist as a member of the Patriots but it makes sense as if they have been planning this for a while, they would have more hands in the cookie jar than just one (as we saw a few episodes ago the butcher that Rachel had known for a while turned against her). It also gives credit to why the Patriots just haven’t arrested her given they have wanted posters all over for her and she has been in a town they control for days now.

The logic is there for sure if the delivery isn’t necessarily what we have seen from the show so far in the impressive second season.

But the real highlight of this episode was the back story and subsequent “execution” of Monroe. It was good to see a bit more about how he became the ruthless dude that we see today and some of the ways he was prior to turning the switch. We have seen some of this in previous flashbacks but this was more powerful for sure. I enjoyed the moment between Monroe and Miles (Billy Burke) until he revealed to him that he knew about his son and was keeping him from Monroe because he had gone off the deep end. It will be interesting to see how this strains their relationship going forward as he’s not dead and they need him in the fight against the Patriots.