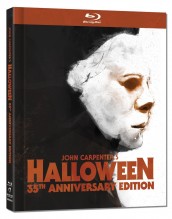 Yet another anniversary, yet another HALLOWEEN reissue this time with new commentary by John Carpenter and Jamie Lee Curtis 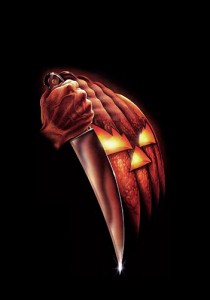 At this point, the big question is, do we need another HALLOWEEN special edition? Every five years, there’s a new anniversary edition, and while there are improvements each time, is it worth shelling out another $30 bucks to own it?

For people who don’t love Carpenter’s original, I would say, it’s probably not, but for fans, each time it comes out, I can’t help but getting another copy for the collection. Usually there’s new bonus features and in the case of HALLOWEEN – 35th Anniversary Edition, there’s a great new hour-long documentary of Jamie Lee Curtis attending her first major horror convention and brand new Carpenter / Curtis commentary track.

Additionally, there’s a brand new transfer of the film supervised by original cinematographer Dean Cundey and 7.1 audio remix (plus the original mono mix available as well).

While it’s hard to tell how big an improvement the new transfer is, remember, this film was made in 1977 after all, and it was a low budget little wonder, it’s still nice to get a Blu-ray upgrade. And the sound mix certainly aids the technology upgrades our home entertainment centers crave.

The story, for those unfamiliar, follows insane Michael Myers as he escapes from a Sanitarium and heads back to his hometown to go after teenage babysitters. The real reason for his rampage is revealed in the sequel HALLOWEEN II, but for the original, his motivations are simple and quiet scary. He is the Boogeyman. His foil is Laurie Strode (played to perfection by Curtis) who gives the monster a run for his money despite her making silly mistakes (like dropping weapons after she THINKS she’s killed him). Also searching for Myers is his psychologist Dr. Loomis (Pleasance in a career defining role).

The result is a classic of American horror and considering the movie was made on a shoestring, Carpenter proves he had some amazing chops. Even more impressive is the early use of the Steadicam, unheard of in a low budget film at the time. It adds a certain class and character to the proceedings and gives the film a much bigger and impressive look than other low budget films of the time.
The cast too is quite good, bringing more realism than you usually find in films of this ilk.

It’s no wonder Curtis became a star because of her horror ties. She really brought a vulnerability to Strode and she is the unsung hero of this film. If you didn’t like her or care for her plight, the rest of the movie would be a complete waste. Lesson to horror filmmakers – stop making your female heroines bitchy harpies. Rewatch HALLOWEEN and see how female characters should be written. That’s how you make a horror film with resonance and smarts – if you like your protagonists, then you won’t want to see them die.

HALLOWEEN has been reissued, but, yes it is worth the price of admission once again. It’s great to listen to Carpenter and Curtis rewatch the film for the first time in years and it’s also a reminder of what a fantastic filmmaker Carpenter is. It’s a shame we haven’t been graced with more films by him in the last fifteen years, but it’s nice to see all of his work finally re-evaluated on these continual home entertainment reissues and given the respect and care they so deserve.