An unusual French series about returnees from the grave 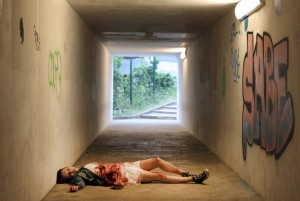 THE RETURNED (LES REVENANTS) premiered last year on French television. Sundance Channel acquired the limited series forU.S. television, with the first of its eight episodes premiering on Halloween, Thursday at 9 PM. The opening episode, “Camille,” is unsettling rather than horrifying for the most part, though there is one gruesome murder scene.

Camille (Yara Pilartz) is a teenaged girl who lives in a small but modern town up a mountain in the French countryside. When Camille is on a school bus with classmates and her teacher, the bus plummets off the road and drops nose first to hit far below. Then a subtitle informs us “Present Day” (we are told later on how much time has transpired between the accident and the bulk of the story). Camille awakens on the mountainside and follows the road home. Her mother Claire (Anne Consigny) seems one of the few parents not in attendance at a meeting of a combined grief support group/memorial planning committee for the children killed in the crash. Claire has been praying for Camille’s literal return, but she is shocked to her core when Camille arrives, hungry (for normal human food) and unaware that anything stranger than a blackout has happened. In short order, Claire’s doctor boyfriend and estranged husband arrive on the scene. Then there’s Camille’s sisterLena(Jenna Thiam), who has an especially strong reaction to Camille – and vice-versa – for reasons that become clearer toward the end of the episode.

Camille is not the only returnee. We meet at least three others who apparently died at different times; it’s unclear exactly what these people do or do not know. There’s also a knife-wielding killer on the prowl, plus some strange electrical and natural phenomena occurring.

THE RETURNED takes a layered approach to storytelling, jumping back and forth in time to add significant details to what we’ve seen. Since it looks as though we’re going to be following a variety of characters whose paths overlap and intersect, this may be not just a stylistic choice but necessary for coherence; in the initial episode at least, it seems as though what we see of Camille’s story might have had more impact if we’d experienced it in chronological order.

In any event, this is a story we have not seen before. Whether the returned develop dangerous new traits or simply grapple with what has happened to them – and with the reactions of families and friends – this is (to the knowledge of this reviewer) the first time thinking individuals have come back from the grave as a group.

THE RETURNED – shown with its original French dialogue track and English subtitles – is also beautifully acted, ominously lit and has a setting new to serialized television for the U.S. It also has fascinating bits like a pinned butterfly that reanimates, breaking the glass of its collection case to fly free.

This is enticing television, promising both shivers and a new take on the genre. If you’re indoors on Halloween night, this is a worthy way to spend part of your evening.