Nice to have the boys back after a year hiatus, even if the episode only produces sporadic laughs 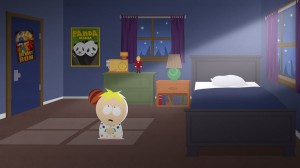 It used to be SOUTH PARK did a full season split into two seven-episode chunks throughout the year. That all changed this year, with SOUTH PARK now doing a 10-episode season in one big chunk.

Other changes on the horizon include more writers than before including former SATURDAY NIGHT LIVE star Bill Hader who has joined the show full-time after consulting on the show for years.

So what does this mean for the Season 17 Premiere of SOUTH PARK? Not much, it still feels very much the same and “Let Go, Let Gov” is an amusing, but not overtly laugh aloud episode that finds the South Park kids back to their usual antics.

The episode follows Cartman pissed off that the government is spying on everything they do, so he decides to infiltrate the NSA and reveal to the world their secrets and how they know everything about us.

Cartman joins a new social media service that only he and Alec Baldwin use – it’s called SH*TTER and it immediately transmits your thoughts to your social media account.

The real truth though about how the NSA conducts is business provides the biggest laugh out loud moment of the entire episode (and I won’t spoil it here).

Concurrently, Butters is paranoid about the government knowing everything about him, and finally gives in and heads to the Department of Motor Vehicles (DMV) and confesses his sins to a clerk. Soon, Butters has followers and the DMV becomes a new place of worship until that power is abused by the powers that be.

There are some great moments in this episode, but it also feels kind of small as a season opener – especially after a year-long hiatus. Still, creators Trey Parker and Matt Stone still have their razor-wit and long-lasting bite. They know how to skewer popular mores and do it quickly and timely, but you always expect more from a debut episode.

One of the cooler aspects of the episode is to hear Hader provide his voice (uncredited) as Alec Baldwin. The Baldwin stuff is also priceless, taking on his increased inability to control his anger and thoughts on Twitter.

This also marks a brand new opening title sequence – done with a mix of traditional and CGI animation. It’s gorgeous to look at it and a nice change of pace from the standard opening titles that have only been slightly altered year by year since Season 1. This new opening has been long overdue.

“Let Go, Let Gov” is an okay premiere, but as is the case with every SOUTH PARK season, not every episode is going to click, but it’s inevitably ten times better than any other animated series or sitcom currently on the air. It will suck to have four less episodes a season, but at least it’s back and as the ratings last night have proved, stronger than ever.