Another horrible bad father sitcom, but this one at least teaches life lessons (we think) 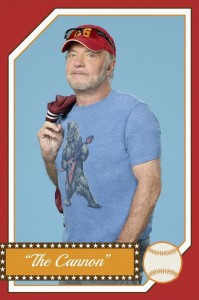 Wow! How many more of these horrible parent sitcoms do we have to endure this fall season (DADS, MOM, etc.). ABC takes another swing at the bat with BACK IN THE GAME which, like THE GOLDBERGS features a rough around the edges dad who doesn’t know how to communicate, comes off as a total ass, but deep down means well.

It’s nice to see the backdrop change for this one – set in a youth baseball league, but it doesn’t mean it’s original. Think of it as THE GOLDBERGS meets THE BAD NEWS BEARS.

James Caan is the surly “The Cannon”, a former professional baseball player who sucked as a father and completely ruined his daughter Terry (Maggie Lawson). His lessons allowed her to be an All Star softball player, but her personal life is a wreck. She has a young son Danny (Griffin Gluck) and no husband because he cheated on her and left her.

The series picks up with Terry moving back home with her dad so she can restart her life. Her son wants to try out for baseball to impress a girl, but he’s not very good and doesn’t make the cut. When Terry agrees to coach all the outcasts, her son now has a home. And before long, it’s clear, “The Cannon” is going to be assisting her in building up this group of outcasts.

For a family comedy, BACK IN THE GAME is surprisingly offensive. There are tons of gay jokes (involving surprisingly, young kids) that backfire, not to mention other questionable attempts at humor as well. Caan is really, truly unlikable with the soft side coming to the surface only briefly. 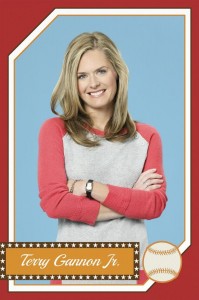 Lawson is okay, but she isn’t given much to do. She’s got spunk and a spark, but unlike Malin Akerman’s character in TROPHY WIFE, she isn’t given any comedic gold (whether physical or verbal) to make her character more than a punching bag for her father and the people around her.

On one hand, credit needs to be given for the show in trying to do something different than the typical family sitcom. The baseball setting is clever and can be mined for different types of comedic potential. On the other hand, I’ve never seen such a sad group of poorly written characters, let alone pathetic attempts at comedy that backfire. There is one, laugh out loud joke during the entire episode, but that one joke doesn’t make the series a winner.

BACK IN THE GAME strikes out (sorry, couldn’t resist the bad pun) and I’m not sure it’s going to find a way to make this motley group of misfits into a hit comedy series. Then again, last year’s THE NEIGHBORS was pretty much a train wreck and it managed to get a second season, so what do I know.

Related: Exclusive Interview with BACK IN THE GAME star Lenora Crichlow