lenora crichlow exclusive interview back in the game 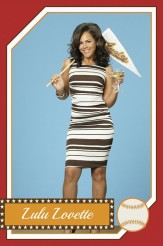 Exclusive Interview: Lenora Crichlow on BACK IN THE GAME and BEING HUMAN U.K. 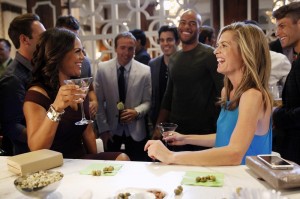 In ABC’s BACK IN THE GAME, Wednesdays at 8:30 PM, Maggie Lawson plays Terry Gannon, Jr., a single mom who’s had to move back in with her dad, former pro baseball player Terry “The Cannon” Gannon (James Caan). Terry was a talented player herself in college, but anger at her often-absent and perpetually cranky dad has made her resent baseball. However, when her young son Danny (Griffin Gluck) isn’t allowed onto his school’s team, Terry fills the vacant position of school coach.

Funding the team and cheering from the sidelines is Lenora Crichlow’s character, Gigi Fernandez-Lovette, whose son Michael (J.J. Totah) plays, though he’s an even less likely ballplayer than Danny. Gigi is a fabulously wealthy English widow who befriends Terry and has wild enthusiasm for just about everything.

London native Crichlow is probably best known to U.S.audiences as Annie the ghost on the first four seasons of the BBC edition of BEING HUMAN. Crichlow also starred in SUGAR RUSH, COLLISION and MATERIAL GIRL in the U.K., but BACK IN THE GAME is her first American series.

At an ABC session for the Television Critics Association, Crichlow talks about playing the expansive, expense-paying Gigi.

ASSIGNMENT X: How did you react to Gigi when you first read the role on the page?

LENORA CRICHLOW: Well, it was quite an organic process. It was the middle of pilot season and you read so many scripts, and I probably shouldn’t say this, but they all kind of start rolling into one – eventually, you don’t know if it’s good. I think it’s a combination of reading a great script – I read so many other scripts that I didn’t get, and then I got in the room and spoke to the creative team behind it, and I thought, “Oh, that’s actually great,” and then vice-versa – I would read it and think, “This is great” and got in and it was like, “This is going to be …” [facial expression says “not great”]. So you don’t really know. So I kind of go to every audition like I really want it, with my own ideas, and see whether we meet in the middle or not. So it was a very organic situation with this one. I went in and I said, “Can I play?” and they said, “Yeah.” Because I think they must be sick of hearing the same lines. So I was invited to improv a bit and kind of make it my own and try it in my own accent.

AX: She was not written as British?

CRICHLOW: No. I think she was Hispanic originally, and then they went [does American accent], “Wait, are you British?” and I went, “Yeah.”

AX: So you initially auditioned with an American accent?

AX: Had you played expansive people before, who enter a room and greet their friends with, “Dahhling!”?

CRICHLOW: [laughs] No, not really. She’s definitely the poshest character I’ve ever played, but she’s in me somewhere. My mother’s side of the family is very, very well-spoken and my mother is an English teacher, so she’s constantly correcting my English. And then my father’s West Indian, so I can switch it up. And then I grew up in not the nicest part of London, so it’s nice. I can pull all these different parts of my personality and upbringing out and just have fun. She’s a fun character to play.

AX: Are the people at ABC big fans of BEING HUMAN? Because Michael Socha, who was the werewolf Tom, is on another new ABC show, ONCE UPON A TIME IN WONDERLAND …

CRICHLOW: I just bumped into him in the lobby – I had no idea. So yeah, there you go. I hadn’t seen him in ages. The last time I saw him, we were in Cardiff [making BEING HUMAN], so they didn’t know anything about the show, to my knowledge. They didn’t bring it up in the audition, anyway. I’m sure they did subsequently.

AX: What did you think of the last season of BEING HUMAN that you were on?

CRICHLOW: I enjoyed it. It was weird without my costars, the cast change [between Seasons 3 and 4], but I enjoyed it. It was an interesting one, and it felt like it was a huge loss for me to end, because I’d been doing it so long, but it felt good. I love that show so much. It feels like an age ago now – so bizarre.

AX: Do you encounter a lot of actors you know from the U.K. at U.S. auditions?

CRICHLOW: I think you do come across them quite a lot and it’s funny – you come over in pilot season and you see all your friends even more over here than you do inLondon [laughs]. Certainly, I’ve been very blessed to work a lot back home in theU.K. But it feels like a natural progression, because there’s so much work here, and the TV particularly that comes out of the States at the moment is exquisite, I find. So it seems like a natural thing to do. But for me personally, the timing has to be right. I first came toL.A. and signed with my wonderful management about six years ago, when I had nothing, not even the body of work that I have back home, and they’ve been incredible in really seeing something in me. And so has my agent back home, because I didn’t train or anything. He saw something and said, “Right, we’re off.” So I owe a lot to them.

AX: Are you old enough to play a mom?

CRICHLOW: [laughs] Well, of course, it’s artistic license here. My son [on the show] is nine or something. We’re bending the rules. No, it’s great. I’ve played one before, but not this much investment. It’s great. I think it’s really cool. It’s nice to see women represented in all walks of life on TV and I think the diversity for women in TV is gaining momentum now. We can be funny, we can be sexy, we can be smart. We don’t always have to be waiting on someone to come and rescue us and panting in a tank top holding a gun. There’s more to us. So it’s nice, I like that.

AX: Do you think much about American baseball?

CRICHLOW: Not a lot, if I’m honest. We have rounders, as a version back home, which is really easy, like baseball for lazy people, [with] a really easy bat. It’s circled, so there’s more of a surface area. It’s really a cheat. And then we have cricket. Yawn. My manager took me to my first baseball game, years ago, and I loved it. But I wasn’t really concentrating on the game. I was eating, chatting, chilling. From what I gather, it’s an awesome sport, but I don’t know very much about it, if I’m honest.

AX: What do you think Gigi’s attitude is toward baseball?

CRICHLOW: Oh, it’s fabulous [laughs]. Everything’s fabulous. Give it a go, why not? And if there are balls flying around, why not?

AX: And where balls are flying around, eligible men should be there somewhere …

CRICHLOW: Eligible men, it gives her somewhere to go, her son loves it, it’s social, it’s her reason to get dressed up. She doesn’t have a dress code. She’s dressed up. It could be baseball, it could be coffee with a friend, it could be gardening. She’s got her heels on, she’s ready to go and I think pretty much everything in her life gets a lot of enthusiasm and a lot of effort and she’s a sort of fun-loving girl. She’s a good ally to Terry. I think they form a really cool friendship, because they’re both single moms at the end of the day, and even though they differ, I think, a lot in personality, they’ve both got real heart and they really do love their sons, their kids, and they’ve got a lot of love to give the world, so that’s fun to play.