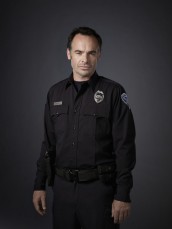 The actor also talks about his new documentary THIS AMERICAN JOURNEY 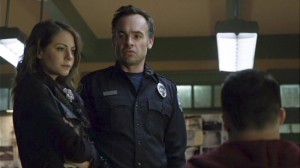 On ARROW, now in its second season Wednesday nights at 8 PM on the CW, Stephen Amell stars as the character first seen in D.C. Comics as the Green Arrow. To the world, Oliver Queen is the wealthy heir to the family fortune, returned to claim his birthright after spending years supposedly lost at sea (actually, going through hard times and a warrior’s education on an island). To those in the know, Oliver is really a vigilante, cleaning up big-time corruption and peculiar evildoers.

Oliver is still in love with Laurel Lance (Katie Cassidy), whose father is law officer Quentin Lance, played by Paul Blackthorne. In the first season of ARROW, Lance was the police captain of Starling City, hunting the Arrow with a vengeance. Now Lance has switched sides and gotten himself demoted to a beat cop in the process.

Blackthorne still has a fan following from his season as Harry Dresden on Syfy’s THE DRESDEN FILES. The actor, originally from Shropshire, England, has also had series regular roles on HOLBY CITY, PRESIDIO MED, BIG SHOTS, THE LIPSTICK JUNGLE, THE GATES and THE RIVER, was a seasonal villain in 24’s third year and co-starred in the Indian film LAGAAN: ONCE UPON A TIME IN INDIA. With his producing/writing partner Mister Bisquali, Blackthorne also made the feature documentary THIS AMERICAN JOURNEY, which Blackthorne also directed. The film was released theatrically last month and is now available on Amazon.

At a party thrown by CBS, the CW and Showtime for the Television Critics Association, Blackthorne takes time to discuss how things are going for Officer Lance.

ASSIGNMENT X: Were you confident last year that ARROW would get a pickup for Season 2?

PAUL BLACKTHORNE: It did seem to be doing quite well, didn’t it? It was going along nicely and putting bums on seats. They like shows that put bums on seats.

AX: You’ve been on a number of series over the last couple of years that have been on for one season …

BLACKTHORNE: Yeah, I’ve had my share. THE RIVER was before this, and THE GATES was before that. LIPSTICK JUNGLE got a couple of seasons, short ones. It’s nice to get on a show that’s rolling along nicely. 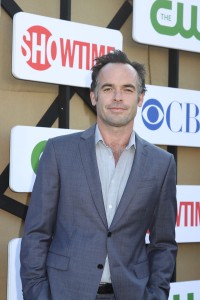 AX: When you were first cast as Quentin Lance, did you do any research in order to play a police captain?

BLACKTHORNE: Yeah, I do research for any character that I play. I do a lot of research – just the path they would take in their lives to get to that, to be a police officer, what that entails. So I do that reading research, and then I just sort of go walking around muttering to myself in dark cities at night, pretending to be in that situation. It’s a bit odd, really.

AX: You’ve played an American in quite a few projects now, although your off-screen speaking voice is British. Is it easier to do a U.S. accent after playing so many American roles?

AX: Without getting too spoilery, can you talk about whether, and if so how, Lance is changing in Season 2?

BLACKTHORNE: Yeah, definitely. Because he’s got a whole new perspective on everything now. With that darn earthquake that occurred, it changed things around. And of course, he’s stepped outside of the law and really is a little more interested in justice, and justice outside the system of the law, which is why he did what he did in the [first] season finale, which leaves him in a place this season which is a whole lot different than it was last season. So he’s got a whole new perspective on doing the right thing now.

AX: So he may be more tolerant of Arrow now?

BLACKTHORNE: I don’t think they’ll be going out for dinner with each other, but he may be a little more receptive to him going forward. Perhaps they’ll be like Butch Cassidy and the Sundance Kid or the Odd Couple. You never know.

AX: Are you looking forward to Lance mellowing on some fronts? Was it hard to play so much of first season angry?

BLACKTHORNE: Well, the thing is, he’s actually in a much better place within himself, much more so than he was any time last year. Because he knows, although he’s been demoted, although some seemingly bad things have occurred in his life – he’s been demoted, humiliated – but he knows he did it all for the right reasons. Within him, he’s actually in a much better place. And he’s away from all the politics and the nonsense, and he feels more comfortable with his life at the moment, in the ruins of everything else that’s going on.

AX: Are you finding the ARROW fandom different than the fandom for DRESDEN FILES?

BLACKTHORNE: I haven’t really differentiated anything. It’s usually the same thing of people coming up and going, “I saw you in this, I saw you in that, I liked you in this, I liked you in that,” whether it be one show or another. And this show’s been popular, so there’s certainly people [who do that]. I think it’s pretty much the same. Maybe it’s a little bit different, maybe they’re a little more enthusiastic. They do like that world, don’t they, that comic book world.

AX: Has this gotten you into reading any of the comic books?

BLACKTHORNE: Well, my documentary film that I spent the last year making [was released in October]. We’ve been working on it for four years. It’s called THIS AMERICAN JOURNEY and I drove across America and interviewed people as to how they felt about the state of America these days, and the American people are fabulous.

AX: Is there anything else you’d like to say about ARROW right now?

BLACKTHORNE: The second season – it’s all turned around. Everybody’s seeing each other from a different place and they’re really trying to pick up the pieces and this whole new dynamic is very, very interesting. Everybody’s in a weird and wonderful place.