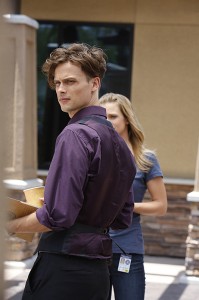 The special agents of the FBI’s Behavioral Analysis Unit – BAU – on CBS’ CRIMINAL MINDS have had a rough time of it lately, what with their colleague Emily Prentiss, played by Paget Brewster, going to work in England when Brewster left the series at the end of Season 7 and Assistant Director Erin Strauss (Jayne Atkinson) being tortured and murdered by the evil Replicator at the end of Season 8. However, arguably Dr. Spencer Reid, played by Matthew Gray Gubler, has had the rockiest year of all. In Season 8, it took him ages to work up the nerve to ask Dr. Maeve Donovan (Beth Reisgraf), who he’d courted over the phone, to meet him face to face. Their first date was disrupted by a stalker and Maeve was eventually murdered right in front of Reid. With help from his friends and co-workers, Reid has pulled himself together, though he may still be somewhat fragile at the beginning of Season 9, which premieres Wednesday at 9 PM.

In contrast to his character, actor Gubler seems like he couldn’t be happier. The actor, who hails from Las Vegas, Nevada (as does Reid), has so far directed five episodes of CRIMINAL MINDS and reveals, “I’m doing two more this year, so seven.”

Gubler, who also works in feature films and does animation voice work – he’s Simon in the ALVIN AND THE CHIPMUNKS movies and spoke for Jimmy Olsen in ALL-STAR SUPERMAN – is at a CBS party for the Television Critics Association. Asked if he has a moment, he grins, says, “Howdy!” and talks enthusiastically about what’s happening for him professionally.

ASSIGNMENT X: Is Reid going to get any kind of a social life this season?

GUBLER: I hope so. He deserves it. He’s had a hard couple of decades. The girlfriend getting shot in front of him. It’s been a hard one for Reid, but hopefully he’ll find some happiness.

AX: Would you have liked to see the Reid/Maeve Donovan relationship play out a little longer?

GUBLER: No, I’d rather see a good smile-worthy occasion happen for him.

AX: So if it’s going to end in disaster, you don’t want it dragged out …

GUBLER: No, pull off the Band-Aid quickly.

AX: How are you enjoying directing on CRIMINAL MINDS?

GUBLER: I love it. I’m absolutely enjoying it. It’s been a wonderful, fun time.

AX: Given that some pretty violent things happen on the show, it seems like there are probably a lot of conversations a lot between Broadcast Standards and CRIMINAL MINDS.

AX: When you’re the director on an episode, are you part of those conversations?

GUBLER: Absolutely, yeah. We always cross our fingers – there have been a couple of moments in each of my episodes that I’ve always been wary of losing and luckily, they’ve let me keep everything that I felt was integral to the story.

AX: What were the ones that you were worried about that we’ve seen so far?

GUBLER: I did an episode called “Mosley Lane.” Bud Cort hangs himself in the bathroom, and I wanted it to be a seven-second, very long, eerie shot. I was worried they would trim it down to two seconds, but luckily, they let me maintain that. And then my last episode [“Alchemy”], there were some bones getting broken by a contortionist, and I was worried they’d make us take out the noise, but they let us keep it all. Very fortunate.

AX: Do you have a favorite episode or sequence?

AX: And working with guest stars like Brad Dourif and Bud Cort …

GUBLER: Yeah. Brad I’ve wanted to use forever, and then luckily that puppet episode came up and I knew that he was perfect for it and he was just very awesome to do it and a true idol of mine.

AX: And were you familiar with Bud Cort from HAROLD AND MAUDE?

GUBLER: Of course. I knew both the guys prior to filming. I was sort of waiting for the right thing to pop up, and hopefully this year I’m going to bring in some more horror icons.

AX: Are you a horror fan in general?

GUBLER: I’ve been a subscriber to Fangoria since I was twelve years old.

AX: Are any of your cast mates directing as well?

GUBLER: This year, Joe [Mantegna] is doing his first. So that’s exciting. He’ll do great. He’s directed a movie [LAKEBOAT, from the play by David Mamet] . Joe is awesome. It’ll be a masterpiece.

GUBLER: Paget [Brewster] and I just did a crazy horror movie over our hiatus. It was [directed by] a guy named Ricky Bates, who directed a movie called EXCISION that’s been blowing up. Right now, it’s titled THE ADVENTURES OF RAYMOND AND BECCA: HAUNTING IN EDGE CITY, and we play a couple of crazy ghost hunters in this strange, bizarre world. John Waters is in it, Ray Wise, Jeffrey Combs has a cameo, but it’s a Ricky Bates film, so it’s not quite a horror comedy. It’s more of its own thing. I’m very proud of it. I did another horror movie called LIFE AFTER BETH. It’s directed by Jeff Baena, the guy that wrote I HEART HUCKABEE’S. It’s with Aubrey Plaza and John C. Reilly and Cheryl Hines and it’s really awesome. I play a security guard turned zombie hunter. Let me think – those two, CRIMINAL MINDS. That’s about it. I want to direct a horror movie when the show eventually ends.