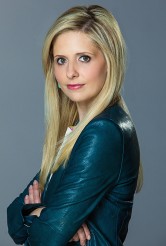 Interview: Sarah Michelle Gellar returns to TV with THE CRAZY ONES

The actress talks her role and working with Robin Williams 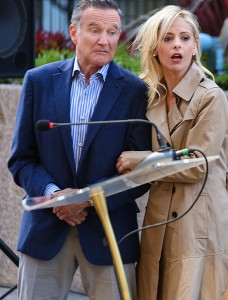 In THE CRAZY ONES, premiering on CBS Thursday, September 26 at 9 PM, Robin Williams and Sarah Michelle Gellar play father/daughter owners of a major advertising agency. Simon Roberts (Williams) comes up with off-the-wall last-minute ideas, such as in the pilot, when he decides that Kelly Clarkson will make a great singing pitch-woman for McDonald’s, even when Clarkson (playing herself) insists on making the song considerably more sultry than necessary to sell Big Macs. It falls to Sydney Roberts (Gellar) to implement Simon’s schemes, whether she thinks there’s genius in her father’s madness, or just more craziness.

Gellar probably needs no introduction, but just in case, she played the title role in seven years of BUFFY THE VAMPIRE SLAYER. She’s also done a lot of feature work during and after that time, including CRUEL INTENTIONS and the two U.S. theatrical THE GRUDGE films. She also starred in the CW TV series RINGER as twin sisters during the 2011-2012 season, but THE CRAZY ONES marks Gellar’s first stint as a regular in a half-hour comedy. In real life, Gellar and her husband Freddie Prinze Jr. welcomed their second child earlier this year.

Speaking at the Television Critics Association press tour alongside her cast mates and series creator/executive producer David E. Kelley and executive producer/director Jason Winer, Gellar says with a laugh that she’s glad to be down to playing one character. “I don’t think I really thought that whole twin thing through [before taking on RINGER]. I don’t think I really realized that there weren’t two of me and I thought, ‘Oh, yeah, I can handle this with [real-life] children.’ That was not my smartest day.”

In contrast, THE CRAZY ONES is much easier in terms of both scheduling and levity, Gellar says, “It’s such a joy. I’ve never had this much fun. We really had a great time and it was a great schedule. When we shot the pilot, and that can be one of the hardest times, I either saw I was there every morning for my kids, or I was home to put them to bed, which was just a testament to how everything worked early on.”

Gellar observes that she’s not a total stranger to comedy – besides some of her feature films and guest work on shows like ROBOT CHICKEN, BUFFY had moments of real humor. “I think that the one thing about BUFFY that was so wonderful was, we hit all of those different notes. It was funny. It was dramatic. It was scary. So I had a chance with that. And because comedy was something I was always interested in, I sort of kept my feet in there, whether it was hosting SATURDAY NIGHT LIVE or hosting the MTV MOVIE AWARDS, whatever I could do. But ultimately, this is really what I wanted to do. I think it’s the most challenging. I always say, ‘If you cry on camera, then people feel for you and they feel it. It’s much harder to get someone to laugh.’”

Regarding playing Williams’ daughter, Gellar says, “I didn’t have a relationship with my [real-life] father. But what’s amazing now is to watch the relationship between my husband and our daughter and to really understand it in a different way, and also to watch Robin with his daughter. I don’t know if it’s one of those, ‘Which came first, the chicken or the egg?’ I don’t know if Robin makes me a better parent or being a parent makes me a better actor opposite Robin, because it’s kind of the same thing, which is, I have to keep a straight face. It’s sort of like when my three-year-old says something really inappropriate and it’s really funny, but I can’t laugh. That’s kind of like working with Robin.”

When the main question-and-answer session is done, Gellar makes herself available for further discussion with a smaller group of reporters.

AX: You worked on the ABC soap ALL MY CHILDREN from 1993 through 1995. Did you learn anything from that experience?

SARAH MICHELLE GELLAR: Daytime has always been such an amazing training ground, and you can see it in Amanda [Setton, who plays Lauren Slotsky in CRAZY ONES and worked 2009-2011 on ONE LIFE TO LIVE] and her work ethic. It makes me really sad to see [soap opera programming] deteriorating. Les [Moonves, CBS president] said he’s going to continue with daytime, which makes me very, very happy.

AX: You had said that after doing the BUFFY musical that you did not want to sing again, but you sing in the first episode of THE CRAZY ONES …

GELLAR: For me, it was such a great moment in the pilot, because that was the true test for me – can I get up there, can I let it all go, all that control? And so I’m sort of learning through Sydney – we’re learning through each other and I found, you know what, I had no problem making a complete fool of myself.

AX: Kelly Clarkson was very an integral part of the pilot. Are there likely to be more celebrities appearing as themselves?

GELLAR: I think [there] will be if it comes organically. One thing is, I want to work with Flo [played by Stephanie Courtney] from the [Progressive] insurance commercials. She’s the one celebrity that I’ve asked David for. He’s sort of promised me – I don’t know if that was a real promise, or … again, I think [it could happen] if it’s organic. And what’s so amazing is, Kelly Clarkson was so freaking good. She opened her mouth, did that first take, and we were all like [drops jaw], because I don’t think anybody expected that. And she was so nervous – she said that she’d decided that this year, she was going to do something that she’d never tried before, something that had scared her. She said she’d put “marriage” in there as one of them. So when this offer came up, she said, yeah, she was a BUFFY fan and she was a Robin fan and she decided to try it and she was terrified, and she was so good.

AX: In the first episode, Sydney is wearing what are arguably some very Buffy-esque leather pants. Was that an intentional BUFFY shout-out?

GELLAR: You know what? I was just five months out of having a baby. I was just happy that they buttoned – I think that was pretty much all I was thinking at the time [laughs]. They [the producers and crew] were great to me. I was still breast-feeding on the pilot, so they would take breaks. They would make jokes that when my outfits stopped fitting me during the day, it was time to take a break and let Sarah go back to her trailer. But it takes a village.

AX: Are you finding being a parent easier the second time around?

GELLAR: I think it’s easier because the main thing is, as a parent, you have to learn to trust yourself, and I think there’s a confidence you have the second time that it’s just impossible to have the first time.

GELLAR: God, if I knew, I would write a book and retire [laughs]. I wouldn’t be here right now. I mean, it’s work. You have to work at anything, at any relationship in your life. You have to nurture it and take time with it.

AX: Had you and David E. Kelley ever tried to work together before?

GELLAR: I’ve tried to work with him – I’m not so sure he’s tried to work with me [laughs]. Actually, the first time I met David Kelley was in this very room. We were at the Golden Globes, and Freddie and I were sitting next to him and Michelle [Pfeiffer, Kelley’s wife] and Freddie’s first job ever was for David Kelley, a movie with Claire Danes, TO GILLIAN ON HER 37th BIRTHDAY. And I was begging Freddie [at the Globes], “Introduce me, introduce me.” And then I saw Calista [Flockhart, who starred for Kelley in ALLY McBEAL] and I was like, “Calista, introduce me!” She was a little busy introducing herself to a man named Harrison [Ford] at that exact time, and I was like, “Oh, my goodness, if someone doesn’t introduce me to David Kelley …” I’m just such a fan. There’s no David Kelley show that I haven’t watched and loved. And he writes for women in a pretty amazing way. And not just women, but I think David writes for everybody. You can have a true ensemble show, and you could say ALLY McBEAL was about Calista, yet you walk away thinking about Portia [De Rossi]’s character. He really writes for everybody, so it makes it such a pleasure.

AX: What was the first Robin Williams movie or show that you fell in love with?

AX: Robin Williams can speak and improvise very quickly. Do you have to work faster with him?

GELLAR: I finally found someone who speaks as quickly as I do. Are you kidding? It’s great. No one understands anything we say to each other, but … I am so lucky. You work with a lot of comedians sometimes, and they can be – I don’t want to use the word “selfish,” but it’s their own art. And Robin is so the antithesis of that. He’s in such a happy place in his life that he gets so excited to come to work, and, I mean, at seven in the morning, he’s funny. He’s amazing. I got to meet his daughters – sometimes it can be very awkward [meeting the real-life offspring of an actor when one is playing the onscreen child], especially seeing that Zelda is an actress – she couldn’t have been nicer, gave me her blessing and made me feel that much more comfortable.

AX: What did you fall in love with about Sydney that made you say, “Yeah, I can play her for a few years”?

GELLAR: Because I can understand where she’s coming from, wanting to find a place for yourself and prove yourself, especially in the shadow of someone so great. I mean I think there’s so much to her, and I think she’s the kind of character that you can really play for hopefully a lot of years to come, and again, nobody writes better than David.

AX: You understand where she’s coming from – with hindsight, or at present? At this stage in life, do you feel like you’re comfortable with yourself and know yourself?

GELLAR: I think I have a pretty good idea, but if I said I was done learning and growing, then I’d be kidding myself. I try to learn and grow every day, but I’m in a comfortable place, yes.

AX: What inspires you?

GELLAR: What inspires me? Everything. I mean, I think I’m at a place in my life where I can take inspiration in anything and I’m at a place where I’m fortunate enough to just really enjoy everything that I get the chance to do. I think that’s one thing about having success younger in life, is that I feel like I’ve already accomplished so much that a lot of everything else is kind of gravy. I just feel very lucky.

AX: Is there anything else you’d like to say about THE CRAZY ONES?

GELLAR: Just that I’m really proud of it. I mean, I think the main thing is, it’s really funny, it’s Robin, but at its heart, it’s a very appropriate love story between a father and a daughter. And please watch.