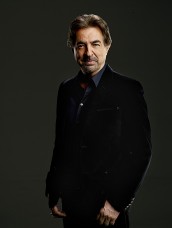 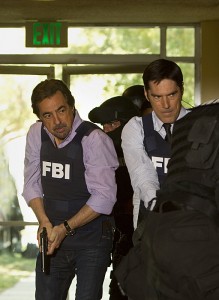 CRIMINAL MINDS, now in its ninth season on CBS, Wednesdays at 9 PM and renewed for a tenth, follows an FBI Behavioral Analysis Unit (BAU) as they track and catch serial killers.

Joe Mantegna joined CRIMINAL MINDS in its third season as Special Agent David Rossi. Mantegna, a Chicago native who worked with the Goodman Theatre Company and co-wrote the long-running stage comedy BLEACHER BUMS, has a scroll-length list of film and TV credits. He frequently acts for writer/director David Mamet, winning a Tony for his performance as Ricky Roma in the original Broadway production of Mamet’s GLENGARRY GLEN ROSS. Mantegna also directed the film version of Mamet’s LAKE BOAT. Earlier this season, Mantegna did his first CRIMINAL MINDS directing gig on the episode “The Road Home,” which finds Rossi helping out a suicidal pal from his Army days, although filming had not yet occurred at the time of this interview.

At a party thrown by CBS for the Television Critics Association, Mantegna gives us an update on how things are going for him and Rossi these days.

ASSIGNMENT X: How long did you think CRIMINAL MINDS was going to last when you first got involved in it?

JOE MANTEGNA: I don’t know, but I just hoped it was going to last long enough for me to stick around for awhile. I guess I got my wish. This is a funny business. I’ve been in projects that I’ve thought were the greatest thing in the world that had short life, and then other things that I wasn’t sure were going to be successful and wound up being hugely successful. If everybody could guess a hundred percent in this business, everything would be a hit. That’s not the case. There are so many factors involved, chemistry and everything else. So you do what you do and you hope for the best, and you put it out there, and if you’re lucky, as we are with CRIMINAL MINDS, where everything seems to click and people respond. [Sees CRIMINAL MINDS cast mate Matthew Gray Gubler standing nearby] Once I met Matthew Gubler, I knew we were definitely in it for the long haul.

MANTEGNA: I saw a few episodes and I realized, yeah, this show’s got legs. And it does. It has.

AX: Rossi has had some major arcs in the past couple of seasons. There was one with his ex-wife, played by Isabella Hofmann, who had cancer and wanted Rossi to help her commit suicide …

MANTEGNA: Well, I asked to do that. The writers are open to our suggestions, and one suggestion I made early on, when I joined the show, was, “At some time, we’ve established that I’ve had three wives. I really think it would be kind of nice that we address at least one of them.” [laughs] So it wasn’t my idea to do the story that they ultimately did, which I thought was great, but I’m glad that they did that, because I specifically like with our show, I think the fans like when we get into personal aspects of the characters, because they have a lot invested in us. And so we’re always going to have the crime to solve, but it’s nice to go behind the curtain and see what’s going on. And so this was an example of that. I pushed toward [“The Road Home,” which deals with] some of my history in the military, And so each of our characters have these little behind the scene things that we like to address when we can.

AX: How did you feel about Rossi’s moral dilemma with whether or not to help his ex-wife?

MANTEGNA: I thought that was handled very well, because I thought it was correct. I mean, I thought, Rossi is the kind of guy who, believe me, would not be afraid to try to better things a little bit, but I think at the end of the day, he just felt this is something that morally and legally, he just couldn’t cross that line. Obviously, the line got crossed anyway, and he was tacitly involved in it by not really perhaps following procedure a hundred percent, but I thought it was real. I thought it was a pretty honest portrayal of what would probably happen in that situation.

AX: It seems like they’ve crammed a lot of losses for Rossi into the last couple of seasons, between the ex-wife and the murder of Jayne Atkinson’s character, FBI Deputy Director Erin Strauss, who was involved with Rossi.

MANTEGNA: Right. Well, that’s what I kind of like about our show, is that we’re not afraid to deal with things that really happen in life. I lost my dear friend Dennis Farina [in 2013] and so this is just another reminder of that. That’s part of life, too. And so I think we’re not afraid to deal with those topics on our show, which I kind of like.

AX: We’ve also seen more and more of Rossi at home, cooking for the team. Did you lobby for those scenes as well?

MANTEGNA: Well, I think they know the fact that my wife and I own a restaurant [Taste Chicago inBurbank,California] and that I like to do that anyway, so I think I didn’t have to lobby too hard on that. I think the writers have a knack for getting to know us as people and trying to incorporate some of who we are into our characters anyway.

AX: Have there been other instances of that you can point to?

MANTEGNA: Well, just the fact that I’m an Italian-American. There was an episode where I helped Hotch [Thomas Gibson] coach his kid’s soccer team, and I used that thing of me being Italian and that’s why I like soccer, and that’s why I collect certain forms of art. Like I said, I’m very active with the military, and I think the fact that we deal with some of my history in the military also ties in with how I feel personally.

AX: Apart from the one you’re directing, do you have a favorite recent episode?

MANTEGNA: “The Fallen,” which was with my dear friend Meshach Taylor [as Harrison Scott], dealt with Rossi’s character in Viet Nam as a young man, and we had other actors [Robert A. Dunne as young Rossi, Joseph H. Johnson as young Harrison Scott] play us, is one of my favorites from this, because I got to work with Meshach, who I’ve known for over forty years. So that was great.

AX: Jeanne Tripplehorn joined the cast as a series regular last season. How was it incorporating a new actor into the long-standing team?

MANTEGNA: She made a really seamless transition into our show. She’s a wonderful actress and a wonderful person, and it’s all we’ve ever asked for in anybody, so she’s been just wonderful.

AX: And how is your cast mate Matthew Gray Gubler as a director, who has now helmed seven CRIMINAL MINDS episodes?

MANTEGNA: Matthew is a brilliant director. He’s or director in residence. Matthew’s always wanted to be a director – he’s got a degree in directing from N.Y.U. This is what he aspired to be, and he can back it up. Thomas [Gibson directed] one this season. Actors, when they do their homework, make very good directors, and Matthew is a prime example of it. So I enjoy it. Partly because they get it. They know what the acting requirements are, so you can eliminate sometimes one more little obstacle or something like that. [The production team] been very supportive of all of us in the cast [as directors].

MANTEGNA: I did RAGING BULL 2 [aka THE BRONX BULL] with William Forsythe. I co-host a show on the Outdoor Channel called GUN STORIES that deals with historical firearms, which is a total departure from my day job. I did that during my hiatus and traveled around Europe and had a good time with that. So I manage to stay pretty busy. I did [an audio] book, the Joe Paterno biography [PATERNO by Joe Posnanski], the coach from Penn State.

AX: After a very successful, even beloved, career as head coach, Paterno was fired for evidently looking the other way while assistant coach Jerry Sandusky sexually abused boys. How does the book deal with that?

MANTEGNA: Well, it was pretty interesting, because it was an authorized biography. The writer worked with Paterno right up until his death. And then the writer didn’t whitewash anything, either. He wrote it right up until Sandusky was convicted. I think it’s pretty brutally honest. There are a lot of tremendous positive aspects about [Paterno’s] life that can’t be overlooked. On the other hand, there was that thing, that at the end of the day, it’s like the book’s got to stop somewhere, and unfortunately for him, in many ways, it did stop there. So his legacy’s going to suffer for it.

AX: Had you done any audio books before that?

AX: Some actors have said that talking incessantly to yourself, as you have to do when narrating an audio book, can be extremely difficult.

MANTEGNA: It’s an acquired skill. I don’t say that I love to do it. I just do it as an acting exercise as much as anything else, because it’s not easy. But like I said, I’ve been doing it a long time. Now I only do certain books – certain writers I’ve done a lot of before. Mario Puzo I did a lot of, Elmore Leonard, I do a lot of Robert Parker – I did all the Spencer books. I did the Paterno book because I knew the author, Joe Posnanski. So I do fewer and far between, though, these days. But I find them challenging and kind of a stretch for me as an actor to do that.

AX: Anything else you’d like to say about CRIMINAL MINDS or your career overall?

MANTEGNA: I just feel very blessed to still have one. It’s Season 9, so obviously we’re doing something right, so I’m not going to look a gift horse in the mouth. Hopefully, we’ll keep doing what we’ve been doing.