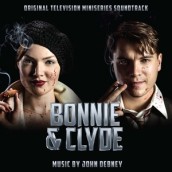 Having helped to blast away the ratings for The History Channel’s HATFIELDS & McCOYS with an energetic, rural score (co-composed with Tony Morales) for a post Civil War blood feud, John Debney gets to jump ahead a few decades for more upscale backwoods violence, courtesy of BONNIE & CLYDE. But where them other fightin’ families definitely were lacking in the glamour department, Debney’s musical canvas is increased exponentially by having two jazz age killer kids at his disposal – criminals who wanted to be stars of their own body-splattered “reality” show that made them antisocial media darlings. Debney spectacularly weds the frontier sound of McCOYS of the couple’s simple roots with their dream of hitting it big in the roaring 20s. It’s a thrilling rat-a-tat of blazing nightclub swing, white trash guitars, fateful brass, the glistening percussion of childhood dreams of fame gone very wrong and a twisted orchestra for the couples’ inevitable trip on the backwoods road of no return.

BONNIE & CLYDE‘s score is all about attitude that seeks to make the outlaws as modern as possible, and Debney rock and rolls with it for one of his most deliriously entertaining scores that’s about as far a cry from Charles Straus’ soundtrack from back in the Beatty-Dunaway day. But the fact that it kind of pays tribute to the with-it spirit of Arthur Penn’s classic in TV two-part form says much about the composer’s adeptness at capturing the period, and character’s roots in a way that musically hips up the legend without selling it out. Crime may not have paid forBONNIE & CLYDE, but it’s a hell of a fun musical ride that doesn’t forget the dark end of the Depression-era duo who inevitably created their own morality fable, one that Debney makes as relevant as today’s slightly less lethal celebrity antics of today’s fast-living punks.

Click on the link to Purchase the BONNIE AND CLYDE soundtrack