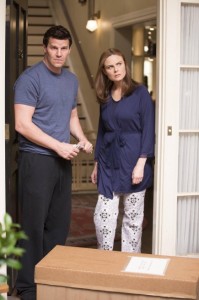 Fox’s BONES, developed by Hart Hanson from Kathy Reichs’ novels, is a show that manages to combine procedural investigation of murders with romance, humor and a generally upbeat attitude. Now in its ninth season on Mondays at 8 PM, the series has been renewed for a tenth.

BONES has seen its leads, forensic anthropologist Temperance “Bones” Brennan, played by Emily Deschanel, and FBI Special Agent Seeley Booth, played by David Boreanaz, go from head-butting colleagues to a still-working together but now loving couple, who have a young daughter and married earlier this season.

Deschanel is now a producer on the series, who spent much of her real-life pregnancy playing pregnant Brennan back in Season 7. At a party thrown by Fox for the Television Critics Association, she amiably fields questions about her character and BONES overall.

ASSIGNMENT X: Brennan has had her baby and she’s married to Booth. What’s next? Is there some kind of attitudinal change?

EMILY DESCHANEL: Well, you know what? Brennan is kind of opening up more emotionally this season, and you see a real shift in her. Her walls are coming down more and more, she’s more sympathetic to other characters, whether it’s Wendell Bray [Michael Grant Terry], one of the interns, or Clark Edison [Eugene Byrd], another intern, or Hodgins [the entomologist on Brennan’s team, played by TJ Thyne]. Each of these characters faces different things in this season and you see her showing sympathy for them and opening up emotionally herself about things in her own life. I think that this is the season for Brennan to open up emotionally and be more vulnerable. It started with the wedding and her being open enough and vulnerable enough to jump in and make that plunge, and I think that it’s a huge thing for her, and so, with that, the character’s navigating a marriage and a relationship [and questions including], do we take our daughter to church? Do we get a joint bank account? Facing the inequality of our incomes, because Brennan makes more money than Booth does, so that’s an issue. And then we try and deal with life insurance policies, the things that people face when they have children and when they have a marriage and different kinds of everyday things that people deal with. But with these two characters, they have very specific viewpoints, and kind of oppositional viewpoints on a lot of things, so that’s a lot of fun to play.

I think that once you’re married, it’s the same, but then you’ve got that mental idea of forever in there. We see in an episode there’s a new forensic intern [Ignacio Serricchio], who was a forensic anthropologist in Cuba, but he’s defected to the United States, and he has to be an intern here, he has to go to school all over again. But he’s used to being the boss in Cuba. He’s a very handsome man and he comes on to Brennan, and Booth does not like this. So that is an issue that we have to deal with, and Brennan has said that she believed that monogamy was unnatural before, but then she married Booth. So we have to discuss all these different things and issues.

AX: Will we be seeing more of Brennan and Booth with their young daughter Christine this year?

DESCHANEL: It’s hard, because you’re dealing with very young kids. If we go another season, maybe we can jump a year [so that slightly older children can be used to play Christine]. You have to limit the time you have. So we don’t see a ton of my character mothering right now, but I hope in the future we see more, because it’s certainly a big thing and a big issue. It’s a way I can really relate to my character personally, when we kind of went through that together. It was something that bonded me to her in a way that hadn’t happened before, so I hope that we have more, but there is a logistical issue of sometimes they just don’t get the scene because the girl is not feeling like acting, which is totally legitimate for a two-year-old.

AX: It looks like there’s a new serial killer arc this season …

DESCHANEL: Yes. [As Brennan] I’m convinced that “The Ghost Killer,” we’re calling her, a female serial killer that Pelant [Andrew Leeds], the old serial killer, informed us about, I’m convinced that she’s part of this crime that just happened. So that’s an interesting storyline that we’ll explore further this season. We’ve had different serial killers and those seem to be the different arcs that we’ve had, and it is nice to have through-lines that kind of continue. Yes, any episode of BONES, you can pick up and watch at any time and that’s the way we are, but for the diehard fans who are watching every episode, they all know the different things that have happened in the past. It’s a little reward for people who watch all the time, and they’ll know about the Ghost Killer and the history with Pelant and et cetera. So I think that that’s a really nice way of doing a show where there are through-lines that continue, but it’s not necessary to know everything that’s going on at all.

AX: BONES started this season on Friday nights before moving back to Mondays in the new year. How did you feel about the Friday night slot?

DESCHANEL: I did not want to move there, I’ll be honest with you. In one sense, I’m glad that I can say now that we’ve been on every weeknight that there is. And it just shows you that our fans are incredible, and they’ll follow you to every night of the week. And we’re just so grateful to our fans that have followed us. I don’t know of many shows like that, that have been moved around as much as we have, and our fans followed us and have been going strong now for nine years. So that’s pretty amazing.