Bones review The Heiress in the Hill 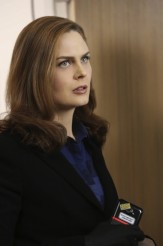 © 2014 Patrick McElhenney/FOX
Brennan (Emil Deschanel) investigates a kidnapping, which turns into a murder on BONES
Reviews 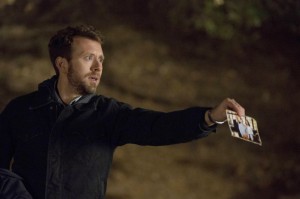 The BONES episode “The Heiress in the Hill” spotlights TJ Thyne’s Dr. Jack Hodgins. So far, Hodgins has weathered the loss of his family fortune very well, but he’s thrown for several loops when he’s approached by a representative of the mental hospital where his older brother Jeffrey (Jonno Roberts) has spent most of his life. For one thing, Hodgins was completely unaware until now that he has a brother.

Because of Jeffrey’s violent outbursts, Hodgins’ parents felt they couldn’t safely bring up their younger child with their older one, so Jeffrey was sent to an institution where he could be cared for properly. Since the Cantilever Group paid for Jeffrey’s stay, Hodgins knew nothing about it until now – because now that the Cantilever Group doesn’t exist, Hodgins needs to find a way to pay for Jeffrey’s continued stay, or else see him sent to a state mental hospital.

When Hodgins goes to visit Jeffrey, the brothers immediately bond over their shared love of Jules Verne. However, when Hodgins hesitates to embrace Jeffrey’s extreme conspiracy theories, Jeffrey becomes enraged. Hodgins is so distracted he at first can’t even talk with wife Angela (Michaela Conlin) about what’s going on, even though she insists whatever affects him affects her, too.

Meanwhile, Brennan (Emily Deschanel) has received a huge royalty check for her latest book. It’s no big deal to her, but Booth is stunned – it’s more than he makes in a year. After some hesitation on his part, Booth comes around to accepting the idea of joint marital finances. He says he wants to give the money to Hodgins so that Hodgins can use it to pay for Jeffrey’s care. Hodgins is grateful, but says he’ll take out a bank loan. Brennan says this isn’t practical, but Booth says it’s responsible. Let’s hold that thought for now. Since Hodgins won’t take the money, Booth suggests to Brennan that they invest it in Wounded Warriors, a real organization that helps wounded U.S. military veterans get back on their feet. Brennan thinks this is a great idea.

When Jeffrey runs away from his facility over fears that he’ll be transferred, Hodgins finds him, promises Jeffrey will never have to leave his home and shows Jeffrey a picture with their parents, proving that they’re brothers. The two siblings walk back to the facility, happily quoting Jules Verne together.

The week’s case involved a dead heiress whose body is found inside a mound of earth. It turns out that the young woman faked her own kidnapping in order to get money to flee her home. However, when she cut off her little toe to prove that “the kidnappers” were serious, the wound became infected. Her accomplice injected her with a massive dose of penicillin, not realizing the young woman was allergic. The medication caused seizures and then death.

There’s a point earlier in the episode than seems intended where it’s possible to guess the fake kidnapping scenario, but that takes third place behind Hodgins dealing with his brother and Booth dealing with making less money than his wife.

The good: Thyne’s tender, thoughtful work as Hodgins puzzles through all of his feelings about his new family member; the Jules Verne quotes; Booth and Brennan’s impulse to help Hodgins; the plug for the Wounded Warrior organization; Booth mellowing out about the money because psychiatrist Sweets (John Francis Daley) points out to him that stressing out over this sort of marital economic disparity is often accompanied by impotence. (Booth may not like earning less income than his wife, but he’s not going to have it impact his prowess.)

The somewhat unlikely: violent schizophrenia is very rare in young children, albeit it does occur. The trouble is, we don’t see Jeffrey in a state that suggests his parents were right to worry about him harming Jack. Granted, there’s only so much time in an episode, but it might have suited the back story better to give us an indication of actual danger, rather than Jeffrey simply being difficult.

The are-they-crazy: instead of taking a gift offered with love from friends who can afford it, Hodgins decides he’s going to take a bank loan, with the debt, interest and (from what we know of his salary) inability to pay it back that entails. This isn’t a message about being responsible, no matter what Booth says – this is ridiculous, particularly when it’s the well-being of a total innocent (rather than Hodgins’ own comfort) at stake.