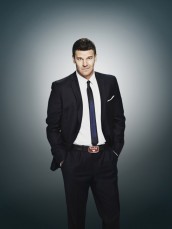 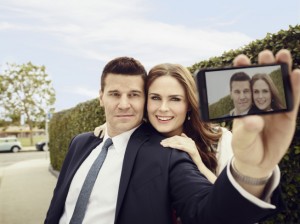 This is a big relief to both the characters and the show’s fans, as the Season 8 finale, “The Secret in the Siege,” had Booth – who’d already accepted Brennan’s marriage proposal – having to lie and say he didn’t want to get wed. This was because Booth was being blackmailed by serial killer Pelant (Andrew Leeds), who threatened to murder more innocent victims if Booth went ahead with the wedding or even explained to Brennan why he was calling it off. Although Brennan decided to trust Booth because he is trustworthy, it wasn’t until Pelant was safely dead that the truth could be declared.

“The Secret in the Siege” was directed by Boreanaz, who has also helmed several other BONES episodes. “Secret” was particularly challenging, both because of a big chase scene in the midst of traffic and because Boreanaz had to function as director and actor in some moments that were very emotional for Booth.

At a party thrown by Fox for the Television Critics Association, Boreanaz takes some time to talk about “The Secret in the Siege,” as well as how he spent his summer. 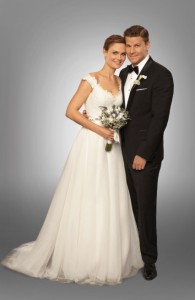 ASSIGNMENT X: Do you know how many episodes you’re directing in Season 9?

DAVID BOREANAZ: I’m going to do two this year, one in the front and one in the back.

AX: How much down time did you have during hiatus?

BOREANAZ: We finished May 6 or 7, went to New York, I gave the commencement speech at my college [Ithaca], then came back and did this new series for DirecTV called FULL CIRCLE and was in three episodes out of twelve with that for Neil LaBute. I play a great character. It was a lot of work, tons of monologues. It was just crazy – a lot of fun.

Then I went to Minnesota for eight days, had a little vacation and then back. It was pretty quick.

AX: A lot of people were very emotional about the Season 8 finale, which you directed. Did you have strong feelings about the whole let’s get married/no, let’s not plot twist?

BOREANAZ: Yeah. I thought that that ending, for the character, was obviously very emotional. I think for the way we handled it, how we wanted to do it, was emotional for both the characters, and to shoot it at the end and how it ended up was pretty dark, but I think it was the right thing to do and I think it enables the show to always keep changing and being creative every season. If you ask why the show sustains itself, it’s really a testament to the work that the actors and the writers put into it, how [series creator] Hart Hanson and [executive producer] Stephen Nathan think, so it’s a blessing.

AX: Is it difficult for you to direct yourself in scenes where Booth is that emotional?

BOREANAZ: Yeah, it is. Personally, you put all of yourself into your work, so for me, it was quite a journey to be able to direct and act in something that – especially season finales, because there’s so much to cover. It’s a challenge and I like it, and you have to be pretty quick on your feet and be pretty much an instinctual person with things. I like to just throw everything I can at it when I direct, and I show up, and then I’ve got to put the other hat on and act. Once I get into the groove of it, it’s fine, but it’s always difficult.

AX: Do you know at this point how much longer you’d like to see BONES go?

BOREANAZ: You know, people asked me that question when we first started the show. My answer is always the same – I work on the episode I’m working on, and that’s all I’m looking at right now.