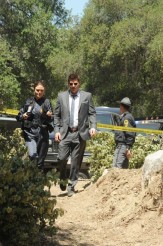 An episode co-written by Kathy Reichs, with all the plates spinning wonderfully 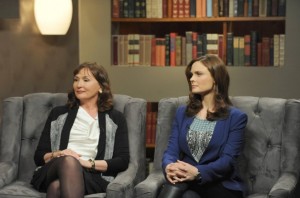 BONES the TV series is based on the mystery novels of real-life anthropologist/novelist Kathy Reichs, whose literary creation Dr. Temperance Brennan is a forensic anthropologist. On the BONES TV series, Brennan writes novels which focus around the investigations of a character called Dr. Kathy Reichs.

The real Kathy Reichs and her daughter Kerry Reichs collaborated on the script for the BONES episode “The Dude in the Dam,” which is notable for the way it creates – count ‘em – three good subplots, all different and all entertaining.

The murder of the week finds the Jeffersonian team trying to find the killer of a prolific sperm bank donor who was fired when it was discovered that he’d lied about his genius credentials (clients pay more for sperm from an Ivy League graduate). The victim went on to sell his sperm online. The culprit turns out to be an employee at the sperm bank who got pregnant while having an affair with him and became enraged when she realized he wanted no part of parenthood beyond his biological contribution.

Meanwhile, Brennan (Emily Deschanel) is drawn into a public verbal feud with fellow mystery writer Tess Brown (Nora Dunn). Brennan honestly thinks Brown’s books are poorly researched and inspired by other writers; asked for her opinion, Brennan of course gives it. There’s an attempt to patch things up on a TV chat show that just makes things worse, then finally a meeting in Brennan’s favorite diner where Brown admits she cooked the whole feud up for publicity. Brennan finds this distasteful, though it’s got both their publishers very excited. Then Brown goes too far, not only acknowledging that she’s a hack, but calling her own fans “idiots.” This is recorded on cell phone by one such fan. The clip goes viral, Brown gets dumped by her publisher and Brennan’s sales increase.

Finally, Hodgins (TJ Thyne), bitten by a botfly, has decided to allow the botfly larva to gestate in the back of his neck. Lab assistant Wendall Bray (Michael Grant Terry) is grossed out by this. Angela (Michaela Watkins) has similar sentiments, but as she tells Hodgins, “My love for you is stronger than my gag reflex.” Angela actually thinks it’s sweet (albeit disgusting) that Hodgins’ love for bugs is so strong that he wants to incubate one; she winds up helping her husband deliver the larva into a nice Petri dish full of soil. The incident earns Hodgins a write-up in a scientific journal.

The murder mystery isn’t bad, but it’s the two subplots involving the regulars’ hearts and souls that really charm us. The literary feud is shrewdly written, with the kind of dialogue we see from actual authors when they slam each other. Brennan tries to simultaneously be tactful and express her beliefs, impulses that never go together for her. Brennan in fact doesn’t understand tact and keeps trying to figure it out, which makes it all even funnier.

Then there’s Hodgins’ decision to surrogate parent an insect. This not only mirrors the main mystery where we see the reverse – a man who impregnates women but wants no part of nurturing a growing life – but allows illustration of Hodgins’ core in a way that’s original and totally true to the character.

There’s even a great tag scene, with Booth (David Boreanaz) earnestly pitching Brennan a sci-fi mash-up of what we’ve just seen as a premise for her next novel, which leaves us with big grins. This is BONES at its best – witty, funny, with insight into its people, goodwill to all, and a solid episodic murder mystery as a bonus. Reichs turns out to be a perfect contributor here – let’s hope she and her script co-author return to the BONES writers’ room before too long.