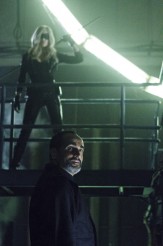 Oliver and Sara must protect the Lance family from a group of killers who will stop at nothing to bring Sarah back under their control. 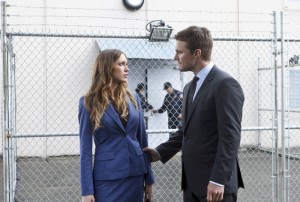 ARROW takes on issues of guilt, forgiveness and redemption in this week’s episode, “League of Assassins.”   And while the episodes’ two main storylines nicely illustrate the agony and self doubt that result from a guilty conscience, I find myself wondering once again whether it’s wise for ARROW to keep focusing on the tortured souls of its characters to this degree.  The process always seems to give the show a heaviness it can’t completely absorb.

“League of Assassins” starts with a flashback to the focal moment of the entire series:  The sinking of the Queen family yacht six years prior to the current story.  A younger Oliver Queen (Stephen Amell) and Sara Lance (Caity Lotz) are enjoying some pillow talk as they carry on with their secret affair on board the Queen’s Gambit.  This is basically the “original sin” of this series, since Oliver is the boyfriend of Sara’s sister, Laurel (Katie Cassidy), and the episode begins with Sara on the phone with her father, Quentin (Paul Blackthorne), lying through her teeth about where she is and what she’s doing, and then referring to Dad as “clueless, as always,” once the phone’s down and she’s alone with Oliver.  Both of these characters are spoiled and reckless, but in moments they will pay for their sins in a truly disproportionate way.  The weather gets rough and suddenly both are thrown off the bed and separated.  Then the hull is breached and Sarah gets swept out into the open water, while Oliver ostensibly goes down with the ship.

He doesn’t go down, of course – we know Oliver escapes with his father on a life raft, which ultimately takes him, (after his father’s subsequent suicide), onto Lian Yu Island, where the remainder of his next five years will be a constant struggle to survive.   But it looks like Sarah might have actually gotten the worse end of the deal, because she floats on the open ocean on one of the boat’s doors until she sees A) A CGI Canary, and B) The mysterious torture freighter from previous flashbacks.

Post-flashback, we find Sara staying at the Queen mansion as Oliver’s guest.  They talk about whether she should let her family know she’s actually alive, and she adamantly refuses.  She says she’s done things since their time on the Queen’s Gambit that there is “no forgiveness for.”  He tries to tell her that forgiveness can’t be given until it’s asked for, but this conversation is interrupted by the arrival of a Hooded Archer, dressed in the exact outfit worn by Malcolm Merlyn last season, who busts in through the window and attacks them both.  His name is apparently Al-Owal (Navid Negahban) and, while they don’t defeat him completely, the two of them do enough damage to get him to flee, although on his way out he threatens to kill Sara’s family if she doesn’t return with him.

Meanwhile, Oliver learns that the District Attorney, who now has Laurel sitting second chair, is offering his mother, Moira (Susannah Thompson) a plea deal to avoid the death penalty for her role in the 500 murders caused by the earthquake machine that her company built under orders from Malcolm Merlyn.  The deal would give Moira life in prison, and Moira, still feeling guilty and convinced she must be punished for her actions (even though they were done under duress), wants some time to consider the offer.  Oliver is outraged that Laurel is part of the prosecution of his mother and demands to know why she’s doing it.  Laurel’s the one who convinced the D.A. to offer the plea deal, though, and in her mind she’s doing the Queen family a favor, since the D.A. would rather see Moira dead than serving life.   Laurel is still in a bad place with her own guilt over the death of Tommy Merlyn, and resentful that both Oliver and her father think she has an alcohol problem, so she’s not interested in Oliver’s concerns right now.

The remainder of the episode features Oliver and Sara trying to protect the Lances from Sara’s former colleagues in the titular League of Assassins.  Through her own stories, and via more flashbacks to the freighter we learn that Sara survived her ordeal at sea only to be forced to join this group of almost mythical killers, (an organization where the only way you get to quit is when you’re dead), and her experience working for them left her with blood on her hands.  She talks about personally slitting the throat of a diplomat in Uganda in his bed, then knowing that his kids found his body the next day.  Apparently Oliver and his crime-fighting associates Felicity Smoak (Emily Bett Rickards) and John Diggle (David Ramsey) don’t spend much time wringing their hands over her horrendous past, and work with Sara to fight against Al-Owal and the two other assassins he’s brought with him.

Sara ultimately decides the only way she can protect her headstrong father, who won’t simply accept Felicity’s word that he’s now in grave danger, is to reveal that she’s alive and tell him what she’s become.  These scenes are emotionally affecting and feature some good acting from both Blackthorne and Lotz.

Ultimately there are some martial arts battles with the assassins, and Oliver, Sara, and Quentin wind up beating (and killing) Al-Owal and his assassins.  Sara decides the only thing to do to keep her family safe going forward is to leave town, and Quentin decides not to tell Laurel or her mother that Sara is alive, as they would never stop looking for her, and that would place them in danger.

Moira also decides not to accept the plea deal offered by Laurel, and to maintain in court that she was coerced into helping Malcolm Merlyn, (which is true, but probably small consolation to the families of the 500 fictional off-screen dead people from last season).

“League of Assassins” also lets us in on the fact that Al-Owal actually trained Malcolm Merlyn how to fight, which means that the League of Assassins is probably behind everything that’s happened in ARROW thus far, since Malcolm Merlyn is also responsible for sinking the Queen’s Gambit and setting into motion the chain of events that led to Oliver and Sara becoming costumed vigilantes/superheroes in the first place.  ARROW really needed to close the loop on its conspiracy theory in this way because it was becoming increasingly implausible to take seriously a universe in which this much suffering could befall the Queens and Lances at the hands of different actors.  The idea that a madman sank a yacht in order to kill Oliver’s dad, who then killed himself in front of his son, and that both Oliver and Sara survived the horrific trauma of the boat sinking only to then be held captive, tortured, and turned into human killing machines over a period of five years by two separate, yet equally depraved groups of madmen was, to put it mildly, a little hard to swallow.

Overall I like the tight plotting ARROW’s creators have given their show so far, but I have reservations about the directions it veers off in at times.  ARROW isn’t BREAKING BAD, and when it goes as dark as it does in “League of Assassins,” (with stories of children finding their father with his throat slit at the hands of a character we’re supposed to like, and whatnot), I sometimes resent being asked to enter a head space that requires me to both appreciate the suffering that results from these characters’ past moral transgressions and enjoy a bunch of warehouse karate fights involving people in costumes.  I can do both, of course, but it creates a dissonance that I don’t find helpful.

If ARROW wants me to think about sin and forgiveness and see everything in shades of grey when I watch an episode like “League of Assassins,” I’m willing to do that to an extent, because the story they’re telling is a pretty compelling one.  But I can get that from a lot of other TV dramas these days, too.  And unlike all those other shows, ARROW actually has the capacity to mix in action, superheroes, and fun.  Why not focus on the things that make ARROW mostly unique in the current anti-hero saturated TV zeitgeist, and give us some shades of black and white once in a while, instead?