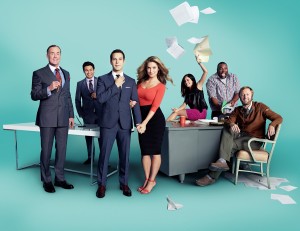 The premise for GROUND FLOOR is simple. A young, rising banker Brody (Skylar Astin) spends all his time living the corporate high life, by working hard and playing very little. During an office party, he meets a charming, somewhat brash woman on the ground floor named Jennifer (Briga Heelan) who has a one stand with him.

The two of them shouldn’t be together, but they have chemistry and have a hard time getting past the one-night stand. Brody wants more from her, even if Jennifer is more of the guy in the situation – afraid of commitment and preferring to keep things loose.

Tying it all together is the upstairs corporate work associates of Brody and the downstairs work buddies of Jennifer with big boss Mr. Mansfield (John C. McGinley) throwing monkey wrenches into the mix at every turn.

Co-created by SCRUBS guru Bill Lawrence and Greg Malins, this traditional sitcom is very entertaining, with a great young cast spearheaded by the engaging chemistry between Astin and Heelan. Heelan is really the revelation here, because she brings a bunch of spunk to what could have been a routine role. There’s an energy, like Sarah Chalke from SCRUBS before her, that transcends the material and she really holds the series together with her comic timing and quirkiness.

McGinley, as always, is quite good, channeling a somewhat tamer version of his Dr Cox role from SCRUBS. He too rounds out a supporting cast that is able, fun and with great room to grow.

If anything, the show feels small, and I mean that with its sets. The upstairs, downstairs aspect is a great concept, but the sets feel confining at times. It strangely gives little places for the characters to go – so some of the staging of the scenes feels awkward at times. When the show opens up to go to a bar or a restaurant, the series starts to feel fuller.

The only other big question mark, is how the series will develop – especially as the relationship between Brody and Jennifer grows (or maybe doesn’t grow). Certainly shows have been built on more constrictive premises, but it’s clear that if the ensemble continues to click, the show will become less about one relationships and more about the disparate group of friends.

Most importantly, GROUND FLOOR is better than 90 percent of the sitcoms that made their debut this fall. It’s not trying to be edgy, it’s not filled with overtly crude humor (though a certain “s” word is heard at one point) and it doesn’t feel forced. There’s a likability and familiarity of all the characters and it’s a premise that is easy to love. So with the crisp writing and solid cast, let’s hope this TBS series has the legs to grow into a surprise hit, because after two episodes, I’m hooked.