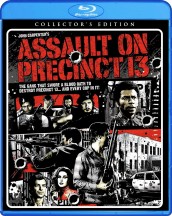 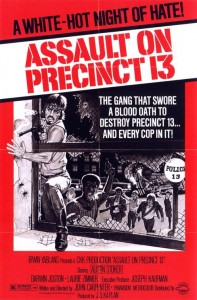 There’s been a nice trend with John Carpenter movies being reissued on Blu-ray as of late, which is a good thing and the latest is his 1976 pre-HALLOWEEN movie ASSAULT ON PRECINCT 13.

While it’s no secret Carpenter loves westerns, he’s never been given the chance to direct a full-on western (though he’s scripted a couple), so many of his films do have that western flavor to it (THE THING, ESCAPE FROM NEW YORK, GHOSTS OF MARS).

With ASSAULT, Carpenter admits to taking the basic structure of the Howard Hawks classic RIO BRAVO and appropriating it for this tidy, efficient little thriller about the last night at a Los Angeles police precinct that is shutting down and being relocated. When a gang war erupts due to a father getting revenge on the death of his daughter by killing a gang member, he ends up at the precinct and it becomes a last stand between the criminals outside and the police (and some prisoners) on the inside.

There’s the expected hard-boiled dialogue and many other Carpenter tropes throughout, but what makes ASSAULT stand-out is how he treats the gang members. There is little motivation and talking between them. They are a force of nature, much like Michael Myers or the lepers in THE FOG. They are a single-minded threat and they don’t mince words, they just attack.

ASSAULT also features a moment that very few films could ever get away with today. It was shocking then, and still shocking now, when a young girl (kid Disney star Kim Richards) is shot in cold blood by one of the gang members. It’s a horrifying scene, but it’s important and it sets the rest of the film in motion and it works brilliantly.

And even though this was a super low budget movie at the time, it’s never looked better. This Blu-ray transfer has brought some of the color back to the film. Previous DVD releases felt washed out, the colors a little too orange, but now it’s restored to a far more acceptable product.

What people tend to forget about older movies, is that VHS and DVD copies were usually made from inferior prints, that made the films themselves seem cheaper, grainer and less professional than other films that were better preserved. Even many of the DVD reissues of classic films were transferred with only satisfactory results in some cases. However, Hi-Def is very discriminating, and you have to spend more time and care to come back with a pristine end product, which is what this incarnation of ASSAULT has.

As is standard with these exceptional Scream Factory titles, the special features are quite good. There are new interview featurettes with actress Nancy Loomis Kyes and her former husband Tommy Lee Wallace, and star Austin Stoker also speaks.

There is an archival John Carpenter commentary, while Wallace (who served as Art Director and Sound Effects Editor on the project) provides a brand new audio commentary. Additionally, there’s a featurette of Carpenter and Stoker being interviewed after a Los Angeles screening of ASSAULT. Throw in the theatrical trailer and some radio spots, and it’s more than enough to make it worth re-purchasing this underrated little classic.