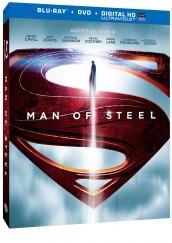 MAN OF STEEL Highlights this week in Blu-ray, DVD and VOD Releases 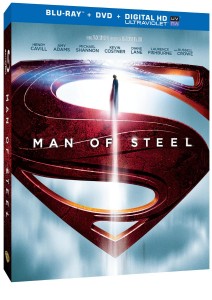 MAN OF STEEL – I loved MAN OF STEEL. Loved it. I know that’s something that may come of a bone of contention for some people that seemed to really down-to-a-new-level hate the movie because it wasn’t simply a reboot of the film series but a complete retelling of the origin story of Superman and of his home world, Krypton. Not being a DC fanboy or even a big fan of Superman in general I don’t harbor any ill will or feelings about his comic book origin or canon. The same goes for Batman, which is probably why I truly loved the Christopher Nolan DARK KNIGHT trilogy – I have no hang-ups on the comic book origin so whatever I saw was more pure enjoyment of a good action movie with a likeable hero than it was “Oh no, they tampered with the canon.” Same goes for Superman, I know that this isn’t the traditional story of the Man of Steel but I don’t care. On a level of a good action movie where would-be gods are fighting and doing stuff that is over-the-top from humanity, it works and works on so many levels.

The battle scenes are simply brilliant with the real feeling that these super powered people are unstoppable and can literally bring down a skyscraper by just plunging into it while fighting. The devastation of Metropolis and Smallville must be seen to be believed as it is really remarkable CG and stunts going on. Henry Cavill is a great Superman. He’s strong and has a quiet strength that comes across smashingly while showing the will that Superman has to overcome the odds stacked against him. While Michael Shannon and Amy Adams aren’t ideal choices for Zod and Lois Lane, respectively, they do enough to let the special effects and plot take center stage along with Cavill to create one hell of a fun movie. Needless to say, the Blu-ray version is a must on this one and you get a digital copy as well, so you can watch it on portable devices. Plus, there are a good amount of actual really interesting special features that document the history of Superman, the action scenes, an animated short and much more. Highly recommended. 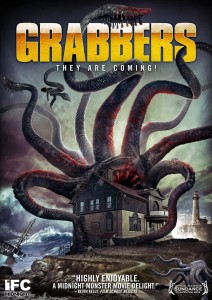 GRABBERS – An Irish horror comedy that involves a gnarly beast from space that terrorizes a small town and loves blood. The only thing that the beast doesn’t like is booze or booze tainted blood. That’s a good thing when you are dealing with a small Irish town that does nothing but drink heavily every day. What follows is a slew of zany scenes of drunk folk trying their best to combat a huge angry octopus like creature that wants their blood but not really because it will die otherwise. Not surprisingly this is a lot of fun. Deep in Irish tradition and with a heavy tongue in cheek to the way that most people view drunken Irishmen and with some decent CG, it has been a while since we have had a really funny, creature terrorizes a unique bunch of character horror such as TREMORS or GREMLINS. This fits the bill nicely and if you enjoy those type of movies, you will get a kick out of this. 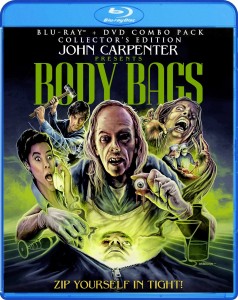 BODY BAGS: COLLECTOR’S EDITION – Back in the day, the horror anthology was big business. You had CREEPSHOW, TALES FROM THE DARKSIDE, DEADTIME STORIES, NIGHTMARES and BODY BAGS. The latter makes its high definition debut from, who else, Scream Factory who continues to publish some of the best classic horror movies onto Blu-ray more than any studio out there these days. The film follows a creepy mortician that opens a number of body bags in order to find a good story to tell – lots of funny goofing with corpses follows. There are three stories: One following a murder at a gas station, which isn’t so much horror as it is thriller. The second has Stacey Keach growing crazy amounts of hair after he becomes obsessed with baldness. The third stars Mark Hamill as a baseball player that loses his eye in a car accident only to get a replacement eye from a serial killer and we know what happens then. While not nearly as spooky as some of the other anthologies, coming from horror icons John Carpenter and Tobe Hooper it will likely find fondness among the horror crowds especially now being remastered to high def. 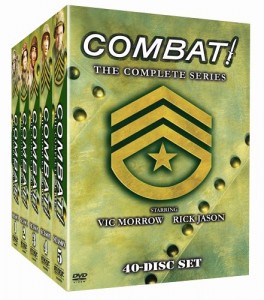 COMBAT: THE COMPLETE SERIES – Just in time for the holidays, Image has re-released the long-time running World War II series COMBAT in a new DVD package. Starring a host of familiar faces including James Caan, Lee Marvin, James Coburn, Leonard Nimoy, Robert Duvall, Roddy McDowall, Telly Savalas, Bill Bixby, Dennis Hopper and more, the show was a look inside the front lines of the greatest war the planet has ever known. The focus was more on the soldiers and how they faced outnumbered odds, courage and lots of know-how to win battles against the enemy. The set includes all 152 episodes of the show. Great gift for the WWII fan.