Another Beast! Katherine thinks that she found out who her real dad is! 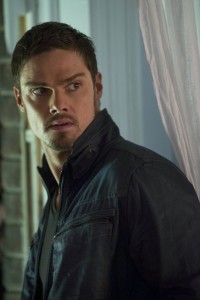 In BEAUTY AND THE BEAST, Katherine (Kristin Kreuk) is getting ready for her 10-year “Reunion,” the title of the episode and is having a pre-reunion get together at her apartment. Walking into her bedroom to put some stuff away she finds Vincent (Jay Ryan) sitting on the fire escape. She tells him, “Haven’t you ever heard of a front door.” He is not sure that he should use the front door yet, which is why he uses the fire escape. The reason he stopped by he tells her, as he wants to see if she can help with him getting back more of his memories and that he wanted to see her. I think it is great that Vincent is starting to depend on Katherine and his feelings of needing her is coming back.

Katherine kicks him out and tells her that tonight is for her and that he should go hang with J.T. (Austin Basis) to see if he can trigger any memories.

While Vincent is at Katherine’s another beast is ripping his boathouse apart. At the precinct Gabe (Sendhil Ramamurthy) is still trying to find Katherine’s dad, but running into a lot of red tape. The mayor calls and is upset that he cannot get an answer on any of the outstanding cases left by Joe Bishop (Brian White) and all the new ones that are happening. Gabe tells Tess (Nina Lisandrello) that we could all get our necks in trouble, including Katherine. Tess has to get a jab in to Gabe concerning Katherine “and she has such a pretty little neck too!” Gabe tells her to “get out!”

At Katherine’s her friends are teasing her about the fact that she always liked dangerous guys. Someone with a broken wing that needed fixing. Meanwhile, J.T. and Vincent are watching the game and pigging out…having a good time like they used to.

As the party is breaking up one of the guests, Beth (Annie Ilonzeh) who is a reporter for the National Metro News left her purse in Katherine’s bedroom. Katherine goes to get it and see someone is on the fire escape. Thinking it is Vincent she pulls back the drapes and it’s another beast that starts to attack her. Beth hears the noise and comes back to the bedroom. When Beth yells Katherine the beast jumps out the window as Katherine shoots after it. Beth calls 911 and the cops come and as she is trying to explain the person Katherine is acting like she doesn’t remember anything. She knows it was another beast. Here’s an idea Katherine…lock your window…your bedroom is connected to the fire escape!

Tess and Gabe show up and Katherine tells them I have to warn Vincent that another beast is out to kill him. Gabe said if you tell Vincent that the beast tired to kill you he will go crazy and go find him. We have to find out who it is and what powers he has as the last beast Vincent fought with in “Hothead” almost killed him. Katherine gives Gabe a shoe that the attacker touched and it should have his DNA on it she thinks. Gabe leaves to go see J.T. in hopes that he can figure it out. Gabe walks in and starts to tell J.T., but he is unaware that Vincent is there. Vincent immediately gets upset and speeds out of J.T.’s.

His new ability of being able to sense and see someone and where they walked and went is a wonderful ability. Following the trail he lands up in a building and tells the other beast “I know you are here” and the beast goes “I knew you would find me.” When the other beast jumps down he is in shock and looks at Vincent and says, “I thought you were dead.” Of course, Vincent has no idea who this is. They start to fight and the other beast keeps yelling it’s me Zach Hayes (Blair Redford); we were in the Delta Company in Afghanistan together. We were friends. Vincent starts to have a flashback of them in combat and lets him go. Bringing Zach back to J.T.’s where Katherine is Zach apologizes to her. J.T. knows him too and goes “I thought you died 10 years ago.” J.T. went to his funeral.

Katherine feels there is something about Zach that she does not trust. She decides to run a background check on him. Tess is telling Katherine to go to the reunion and she will look into it. She doesn’t want Katherine to miss her 10-year reunion since she was so looking forward to it.

Zach, J.T. and Vincent head to the bar to drink and play pool like old times. Zach brings up a girl names Gabriella (Daniela Barbosa) who Vincent used to date. Looking at a waitress he has a flashback of Gabriella. Zach is going on and on about her. J.T. knew her and he starts to realize that something is not right.

FBI Agent Bob Reynolds (Ted Whittall) shows up in Gabe’s office to find out how Katherine is. Gabe is wondering why the FBI would want to know that. Agent Reynolds tells Gabe that he promised her father, and so Gabe asks him to help find her real father. At that point Tess comes in the office to say that Zach Hayes killed Gabriella and Reynolds said he would take care of Hayes.

Back at the bar, Zach finally tells Vincent that she was his and after he left she wrote that she had fallen in love with Vincent and she was suppose to be there for him when he came back from the war. He starts a fight with Vincent in the bar and J.T. puts a stop to it. Zach yells, before running out, “You’re a dead man Keller. You ripped my heart out and now I’m going to rip out yours.”

At the reunion the girls are dancing and Ira Webster (Danny Smith) who was the school mascot walks up to Katherine, in costume, to say hello, as she was always nice to him.  Beth is on stage with donation cards to build the swimming pool for the school. Katherine asks for a card, but Beth tells her that her father sends a check every August. Katherine asks her “not this August, because he died in July.” Yes, he did send one this August. Which Katherine thinks is very strange.

Vincent goes back to look for Zach to talk to him. He tells Zach, Muirfield made us killers and beasts, but we are still men.” Zach yells at him “you took Gabriella and now I’m going to take your precious Katherine away – she’s dead Vincent!

Zach shows up at the reunion, takes the mascot costume and looks for Katherine, but Vincent has already got there to warn her. Gabe and Tess also showed up. Katherine tells Gabe “I’m dating a beast and running from one. I always thought I would be married, have kids and be a lawyer like my dad. “ Like most people sometimes your life just doesn’t turn out like you thought it would.

Vincent and Zach start to fight and the stage explodes and knocks Katherine down. People are running everywhere to get out of there. They are now in full beast mode and are fighting in the balcony. Zach jumps down to get Katherine, but Vincent follows and grabs Zach and snaps his neck. Another beast bites the dust! Vincent is all concerned about her. Katherine says to Vincent “it’s strange that you can remember how to be a doctor, but don’t remember being one.” He tells her he would be lost without her and realizes now how much she does for him and when these missions are over I will make it up to you. And then they kiss before Katherine tells him to go out the back door because there are cops everywhere. Vincent runs into Gabe and tells him to watch out over here. Gabe said, “I will.” As Gabe walks back into the dance Vincent is starring at him and you realize that Vincent knows that Gabe cares for her more then he should.

Katherine thanks Gabe for all his help and as they are looking through some photos of Katherine on the track team and at the Graduation, she notices that Agent Reynolds was at her Graduation. Turning to Gabe and wondering why he was there, she tells him “I think I just found my birth father.”

It will be interesting to see how she approaches Reynolds to find out and what the deal was with Reynolds and her mother.  Since he is pulling Vincent’s strings will she find out that he is behind it? I’m not sure that when the missions are complete will they fix Vincent, or try to kill him, as Reynolds definitely does not like the fact that Vincent is involved with his daughter.