Home » bones review the mystery in the meat

A healthy mixture of character, sleuthing, fun and well-integrated message 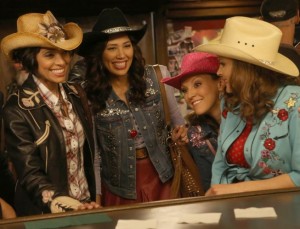 What’s going on with a lot of food products is a crime. The BONES episode “The Mystery in the Meat” highlights this by literally adding murder to the stew. When human remains turn up in the lunch special at a high school cafeteria, Brennan (Emily Deschanel), Booth (David Boreanaz) and the team have to go through all of the beef stew to find various bits of the victim. District Attorney Caroline Julian (Patricia Belcher) is keen for the case to be solved before the public relations disaster – the school lunch program has turned kids into unwitting cannibals – gets worse than it is.

There’s squabbling in the lab between interns Daisy Wick (Carla Gallo) and Dr. Oliver Wells (Brian Klugman), but they manage to establish that the dead man had had brain surgery. This in turn allows for identification. The deceased was a successful food scientist, who was about to blow the whistle on the company that hired him. Among other things, the company used horsemeat acquired from a Mexican slaughterhouse instead of beef.

Daisy and Oliver reach a kind of détente by the episode’s end. In a subplot, Angela (Michaela Conlin) plans a retroactive bachelorette party for Brennan, inviting along Cam (Tamara Taylor), Daisy and Caroline. The venue turns out to be a biker bar, where the women do shots, dance and wind up fighting with the women of a biker gang. The event also mends the relationship between Booth and Angela (Angela was mad at Booth for calling off the wedding, and Booth was mad at Angela for being mad at him), as Booth wants Brennan to have a strong bond with best friend Angela and Angela appreciates this.

Regarding this last aspect, it would have been nice for Booth to acknowledge that, as Brennan’s best friend, Angela could hardly have acted otherwise, as Booth’s unexplained behavior was objectionable. Angela’s desire to get out and flirt and her comment that she’d come on to Booth if he weren’t married (rather than if they both weren’t married) may be hints of trouble in the Angela/Hodgins romance – or else they’re bits of amnesiac writing. At this stage, it’s not possible to tell.

It’s nice to see Brennan and the rest of the female characters cut loose, but for once, the real fun here is in the A story. With every narrative reason on Earth backing them up, all of the regulars, as well as some of the guest characters, get to talk about a number of bad things that are regularly added to food. The episode goes on to delve into a number of icky realities – the fact that schools (and senior citizen homes and other institutions) are considered secondary markets, where substandard food products are sent if they don’t meet supermarket criteria, that processed food requires additives just to give it taste and that quality control is frighteningly light in some areas. If a spoonful of sugar helps the medicine go down, an episode of playful BONES banter helps the information sink in.

Related:TV Review: BONES – Season 9 – “The Spark in the Park”