A good monster and some welcome personal touches for the characters 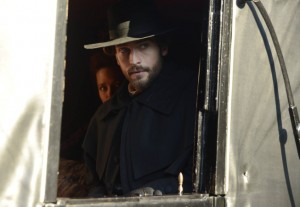 Fans of the EVIL DEAD films will know it when they see it, and CABIN IN THE WOODS aficionados are familiar with the terms Angry Molesting Tree. Well, they’ve got one right in SLEEPY HOLLOW, causing problems for our heroes and their families past and present. The Angry Molesting Tree – let’s call it AMT for short – doesn’t make many TV appearances, but it successfully takes root in the episode “Sanctuary.”

When billionaire Lena Gilbert (Erin Cahill) goes to visit a house she’s purchased because it belonged to one of her ancestors, she finds herself trapped inside and then yanked into a closet by a bunch of branches. Given her social prominence, Lena’s disappearance from the rest of the world is soon noticed, and since her last known GPS position is in Sleepy Hollow, Captain Irving (Orlando Jones) gets a call to search for her. He turns the case over to Abbie (Nicole Beharie) and Ichabod (Tom Mison), who see that Lena has left a note referring to “Katrina C.” – Ichabod’s wife Katrina (Katia Winter).

When they arrive at the house, Ichabod realizes he was here in Colonial times. It belonged to his friend Lachlan Fredericks (Craig Trow), an ardent abolitionist who made his home into a safe haven for anyone who needed it – including members of Lachlan’s coven like Katrina.

Ichabod and Abbie go inside the house, which promptly slams shuts and locks the doors and windows. They find Lena’s bodyguard, dead, but are able to rescue Lena herself from the branches in the closet. Ichabod finds Katrina’s favorite book, with a letter inside, from Ichabod to Katrina, which he wrote in the event of his death.

A creature made of roots (the AMT) rises up on the grounds outside the house and comes in to terrorize everyone. Abbie gets separated from Ichabod and Lena, and Lena gets kidnapped by the AMT. Abbie then has a vision of Lachlan’s lover, African-American Grace Dixon, beckoning her to witness the birth of Katrina’s – and Ichabod’s – son. Although the house is protected by magic, Moloch used roots growing outside to infiltrate the dwelling. When Lachlan went outside to confront the monstrous construct, it killed him.

When Abbie finds Ichabod, she tells him about her vision. They find and rescue Lena. Then Ichabod goes back inside to kill the root monster, which had threatened his wife and child.

Meanwhile, Irving is getting custody threats from his ex-wife Cynthia (Jill Marie Jones) about their young daughter Macy (Amandla Stenberg). Cynthia is furious with Irving for canceling his weekends with Macy, and he’s in no position to explain he’s busy trying to stop the apocalypse. Abbie’s sister Jenny (Lyndie Greenwood) invites Irving over for Thanksgiving.

Abbie invites Ichabod over for Thanksgiving as well, but he’s too upset about missing Katrina and not knowing what happened to their baby to want to be around people. However, Lena sends a document showing that Grace Dixon is Abbie’s ancestor, who delivered Ichabod’s son. Abbie and Ichabod toast to their connections.

Learning that Ichabod had a son – which means that his bloodline may extend into the present – is certainly a good new twist. The added connection between Ichabod and Abbie is sweet, though it doesn’t feel entirely necessary. Then again, perhaps this is simply laying the groundwork for something that will be vital; the SLEEPY HOLLOW writers have amply earned the viewers’ trust in tying plot threads together so far.

It’s also gratifying to see a bit more of Irving’s life, helping to round him out further. The implication that there could be romance between Irving and Jenny – at least, Macy thinks Jenny is her dad’s new girlfriend – is interesting and not unpleasant.

Then there’s the house, which isn’t really haunted in a conventional sense. Yes, Abbie sees ghosts, but she’s had visions elsewhere. The AMT isn’t an entity haunting the house so much as it’s a monster lying in wait. To be sure, it’s a monster that pays homage to some good movies, the way it is worked into the narrative is smooth and its use nicely explains how a spell that worked for a long while was eventually thwarted.

SLEEPY HOLLOW remains absolutely enjoyable and if “Sanctuary” isn’t as scary as some other episodes, it is still solid.