The exec producer/show runner talks falling angels, the rumored spin-off and how long the show can run 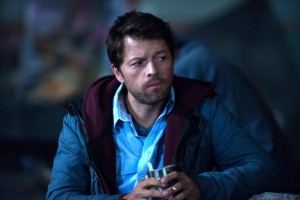 SUPERNATURAL, created by Eric Kripke, is now in its ninth season on the CW, Tuesdays at 9 PM. Thousands of angels have been expelled from Heaven and landed on Earth. One of them, Ezekiel, has taken up residence within Sam Winchester (Jared Padalecki), who is unaware that his brother Dean (Jensen Ackles) has tricked him into accepting the celestial hitchhiker so that Sam can heal. Meanwhile, the Winchesters’ erstwhile angel friend Castiel (Misha Collins) has been turned human by the irate angel Metatron (Curtis Armstrong), who is now alone in Heaven after locking the gates on all his kindred. King of Hell Crowley (Mark A. Sheppard) is a prisoner in the basement of the Winchesters’ Men of Letters hideout, while demon Abaddon (Alaina Huffman) is taking a run at Crowley’s diabolical crown. It’s shaping up to be an eventful year.

Jeremy Carver, the show runner on SUPERNATURAL for the last two seasons, is at a party thrown by CBS, Showtime and the CW for the Television Critics Association. Without getting too spoilery, he talks about what’s happening in Heaven, Hell and points between.

ASSIGNMENT X: Did you have a strong feeling that SUPERNATURAL was coming back for a ninth season when you were working on Season 8?

JEREMY CARVER: Well, yeah. One of the benefits of Season 8 was that we were renewed fairly early this year. I think we were renewed right around January or early February, so that gave us a real advantage in plotting out our final episodes [for Season 8], in that we could leave more loose ends than we might normally do, because we knew we were coming back and we could really lead into this fallen angel thing, the spectacle that it became, so it was fortuitous that we were renewed so early.

AX: How and when did you decide that you were going to end Season 8 and segue into Season 9 with the fall of the angels?

CARVER: The falling of the angels was something I’d been bandying about from the very beginning of the [eighth] season, but we always leave ourselves some opening to see where the season takes us. So it was this idea very early on, and it was something to shoot for, but you never say never to something else until you need to lock it in. So it’s something we were definitely shooting for, but we were not going to pull the trigger unless it felt right. And it felt right.

AX: Are there a lot of recurring characters in Season 9?

CARVER: Yeah. We have – we were referring to it at Comic-Con as something of a broken landscape. And in that, we’ve got a lot of players this year and a lot of players for the throne of who’s going to rise to the fore here, and there’s a lot of really juicy options that we’re going to be introducing, so we’re excited.

AX: Can you go into any specifics about the new characters?

CARVER: I can say that we will see fairly early on one angel in particular who sort of fancies himself as the leader of one of these factions that we’ve hinted at the past couple of seasons. But I can’t really go into it, because many of them are important story points, and they’re really fun reveals.

AX: The most famous fallen angel was Lucifer – who has appeared as a character on SUPERNATURAL. Are any of the more recently fallen angels going to feel that, since they’ve fallen, they ought to be like Lucifer?

CARVER: Well, I’ll answer it this way. I think the angels that have fallen are not a monolithic force, in that we treat them for the most part as individuals. And in that way, we’re really able to dig deeply into these individual characters, who are these angels. So we’re going to see some angels, like I was saying before, who are members of these factions that we talked about that were battling in Heaven and find themselves on Earth. We are going to find many angels that are alone and are lost and are wandering and are scared. We’re going to find, even more excitingly, several angels that even other angels have never seen before, for reasons that will be explained, and reach very, very far back into angel mythology, and we’re going to see a few of them in the early part of our season. So I can’t answer the idea of going to Lucifer, but we’re going to see many different angels with many different interpretations of what it means to be potentially stranded on Earth.

AX: Might we ever see Rob Benedict’s character the Prophet Chuck again? The last time it was brought up in the show, the other characters were saying, “Well, he must be dead, because …” rather than just, “He’s dead.” There was an element of mystery there.

CARVER: No comment. Love him, but no comment. That is a burning question to be left unanswered. But we’re well aware of the question.

AX: How did you come to cast Curtis Armstrong, who is as much as anyone alive associated with nerdiness due to being in multiple REVENGE OF THE NERDS films, as the extremely powerful angel Metatron?

CARVER: I’ve adored him as an actor since all those [NERDS] movies and he came in and he just nailed it. He perfectly encapsulated the idea of this underdog, as it were, who was pulled from what he called “the steno pool of Heaven,” to be granted a seat by God’s knee. And he brought such wonderful humanity to that role. And his character, this season, really is almost more powerfully felt more than seen, certainly in the early parts of the season, because of the tremendous effect of what he did. But I adore him, so when we had a chance to cast him, it was pretty much a no-brainer.

CARVER: Beyond helping get the rumored spin-off off the ground, no.

AX: What can you say about the rumored spinoff?

CARVER: It was announced at Comic-Con. There is a planted spin-off in the works, which is going to be airing in Episode Twenty. It’s going to introduce all-new characters and it is going be of our SUPERNATURAL world, but also different, in that it’s going to be a fresh take on the SUPERNATURAL world. What I mean by that is, where SUPERNATURAL is a road show, this show is going to be predominantly in one location, which right now is Chicago, and it’s going to explore the clashing monster and human cultures existing side by side in Chicago. And to that end, you’re going to see lead characters that are both monster and human. And that’s all I can tell you about that.

AX: Do you know how long you want to see SUPERNATURAL continue?

CARVER: I think everybody associated with the show would agree that it can go as long as it feels fresh and it feels grounded. A pitfall a lot of shows can [hit] is that they feel a need to explode the show or reinvent the show, and the tendency to do that often causes the show to lose its moorings and what it is. And one of the things I think that has kept people coming back to SUPERNATURAL is that it’s a show that over eight seasons now has always known what it is. Even when we do our crazy episodes, our meta episodes or whatever, the show always knows what it is. And as long as it feels like it’s that, then it should be on the air.

Related: News – SUPERNATURAL CONVENTION with Jared Padalecki and Jensen Ackles on stage together